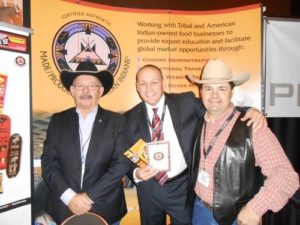 Mission: To provide a unified effort to promote change in Indian Agriculture for the benefit of Indian People.

The Intertribal Agriculture Council conducts a wide range of programs designed to further the goal of improving Indian Agriculture. The IAC promotes the Indian use of Indian resources and contracts with federal agencies to maximize resources for Tribal members.
The Intertribal Agriculture Council was founded in 1987 to pursue and promote the conservation, development and use of our agricultural resources for the betterment of our people.
Land-based agricultural resources are vital to the economic and social welfare of many Native American and Alaskan Tribes. The harmonies of man, soil, water, air, vegetation and wildlife that collectively make-up the American Indian agriculture community, influence our emotional and spiritual well-being. Prior to 1987, American Indian agriculture was basically unheard of outside reservation boundaries.
Since that time, IAC has grown to prominence in Indian Country and among the federal government agencies and the agricultural field with which it works on behalf of individual Indian producers and Tribal enterprises. The IAC has over the last decade become recognized as the most respected voice within the Indian community and government circles on agricultural policies and programs in Indian country.