February 4, 2014
For Immediate Release
For more information Contact:
Brandon Stephens, Development Director
(615) 467-1560
bstephens@usetinc.org
(Washington, DC) – – Reports on the status of Indian Budget, gaming, tax reform, and Indian programming through the U.S. Department of Interior, Farm Bill, and Housing Bill are a few updates the USET Board of Directors are receiving from federal agencies today. USET is providing its input on Indian Country’s access to capital and credit for economic development. It will also have the opportunity to provide comment on the reauthorization of the Indian Health Service Special Diabetes Program for Indians legislation.
U.S. Department of Interior- Assistant Secretary, Indian Affairs- Kevin Washburn 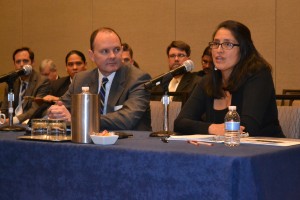 Indian programs in the U.S. Department of Interior Bureau of Indian Affairs may have received a boost in the 2014 budget compared to 2013, but some issues are still lingering to place a strain on the budget says Assistant Secretary, Indian Affairs Kevin Washburn. Washburn told USET’s Board of Directors the federal government has restored Indian programs to the 2012 funding level, which is greater than the 2013 budget that was slashed five percent across the board. Congress has asked Interior to provide contract support costs to Tribes, protect Indian education programs in addition to some increases, guard general welfare programs, increase Housing Improvement, and continue with law enforcement efforts. Washburn says these marching orders came from Congress and Tribes without the assistance of additional federal funding. “So if we fully fund contract support costs we have to get that money from somewhere. We will have to find the money in the budget and we are going to have to move things around a bit,” Washburn explained. It is expected the 2015 draft budget for Indian programs will be released on March 4, 2014. Washburn concluded with updates on Fee into Trust property issues, review of Tribal gaming compacts, and the recently released Bureau of Indian Affairs 2013 American Indian Population and Labor Force Report. 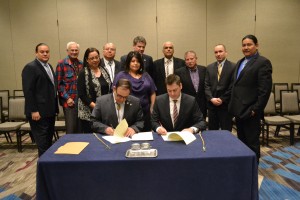 USET and the SBA are signing a Strategic Alliance Memorandum (SAM) today. The SAM is design to create a clear partnership between USET and SBA to help bring resources to promote business development, job creation, and eventually the promotion of healthy well developed communities. SBA Office of Native American Affairs Assistant Administrator Chris James was on hand to sign the SAM with USET President Brian Patterson. The SAM is also signed by Deputy Assistant Administrator Mina Wales. Chris James was also accompanied by Associate Administrator John Shoraka who is responsible for overseeing the umbrella office with jurisdiction over the offices of size standards, government contracting, HUBZones, and 8(a) certifications. 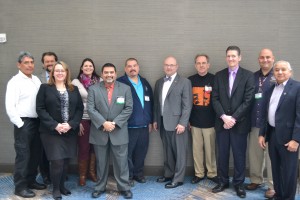 The U.S. Department of Homeland Security (DHS) Intergovernmental Affairs has recently hired David Munro to replace long-time Tribal Affairs Director Steve Golubic. Munro’s role as Director of Tribal Affairs will be to oversee the department’s continuing efforts to coordinate and consult with the nation’s 566 federally recognized Tribes. He also serves as the main point of contact at DHS for engagement with Indian Tribes and the various Tribal associations and will coordinate and support the implementation of the DHS Tribal Consultation Policy. “My priorities are to get to know the Tribe and implementation of Executive Order 13175 which is and order for federal departments and agencies to consult and coordinate their activities with Indian Tribes,” Munro told the USET Board of Directors. 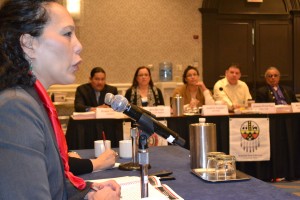 Staff Director Mary Pavel and Deputy Chief Counsel Rhonda Harjo provided some general updates on the Senate Committee on Indian Affairs (SCIA) work with the Indian Budget, Housing Bill and Farm Bill. Pavel explains has a few priorities on energy, education, and healthcare. Pavel says SCIA appreciates USET’s work to help with each issue adding, “Your prayers to be quite frank are absolutely 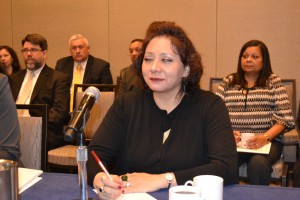 necessary because this is hard legislating. The founding fathers made this hard and this is hard.” SCIA Deputy Chief Counsel Rhonda Harjo also commented USET always has an open door to the committee. “We (SCIA) always appreciates the bipartisan work you do with each of the issues,” Harjo stated. Harjo also gave a brief update on issues of law enforcement. 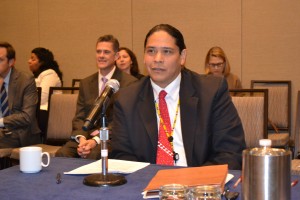 National Indian Gaming Commissioner Jonodev Osceola Chaudhuri set the tone of the NIGC’s report to USET by beginning with, “Economic development across the board is important to me as a Native person. It is where the rubber meets the road as far as providing us tools as Native peoples and that is frankly to preserve our cultures, preserve our vision of the future, to preserve our self-determination. So economic development, and by extension ‘gaming’ as an industry, is only a means to an end. The real end is protecting who we are as Native people.” Commissioner Chaudhuri noted the four areas of concentration in the next few years based on the NIGC strategic plan and the four upcoming consultation meetings during 2014.

###
“Because there is strength in Unity”