Native Americans are trying to prove that their languages are alive and thriving. 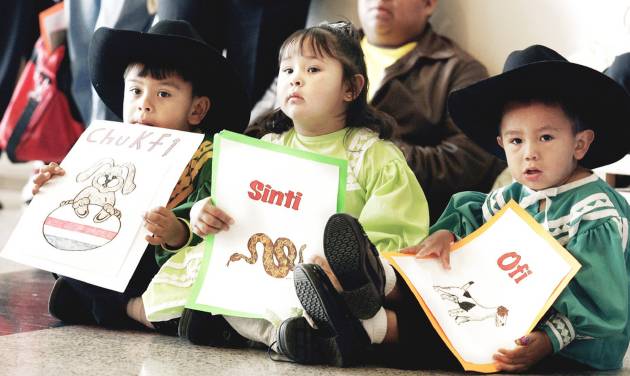 Since the arrival of European colonizers in the Western hemisphere, Native American tribes have suffered in every imaginable way. This marginalized group of people has endured everything from cultural death to literal death and, in recent decades, have begun dealing with the death of their tribal languages.

Linguicide — the death of a language — is quickly becoming the grave reality for the 562 federally recognized Native American tribes in the United States. Only 16 percent of the remaining tribal languages are spoken as first languages by Native children, and some languages have less than 10 fluent speakers.

One of the main facilitators of Native language death was the implementation of boarding schools in the 1800s, which sought to eradicate every aspect of tribal cultures by targeting younger generations. These children were brutally punished for speaking in their mother tongues, which led to them fearing retribution in adulthood and refusing to transmit their languages to their children.

Establishing these boarding schools was only one of the numerous ways in which the United States government directly attempted to eliminate everything they despised about Native Americans. They destroyed families, cultures and tribal identities, and tribes today are left to clean up the mess that forced assimilation caused.

Most Americans will never have to think about what will happen to their culture if their language ceases to exist. However, Native Americans must ask this question daily as they watch their communities suffer.

Language and culture are inextricable, and cultures die when languages die. These tribes constantly live under the threat of losing their histories, their stories, their religions and their familial ties as their languages become moribund.

Though linguicide is a disastrous issue that almost all tribes face, many tribes are successfully bringing their languages back from the brink of extinction. Here are four Native American tribes fighting against the lingering effects of colonialism as they preserve their treasured languages.

In 2000, the Sioux realized that only 14 percent of Natives living on reservations in North and South Dakota speak Lakota. In response, the language was officially considered “endangered.” Lakota is spoken by seven tribes and Dakota, which is closely related, is spoken on only a few reservations.

Lakota speakers have implemented various language programs to teach younger generations about the language. Language institutes have been founded around the country, particularly on the now famous Standing Rock Reservation. There are even some websites that teach basic Lakota words and phrases and compare pronunciations in the Lakota and Dakota dialects.

The Lakota Language Consortium is one of the most prominent programs designed to help people learn the language, and their primary focus is on children.

Their goal is to make Native children fluent in the language by eighth grade and provide items such as textbooks, CDs and flash cards, and the organization is trying to develop language games to encourage children to study the language.

The Cherokee are one of the largest Native American tribes in North America, but the tribe still worries about language loss. In 2002, the Cherokee Nation conducted a survey that found that there were no fluent Cherokee speakers under 40. The Cherokee Principal Chief declared a state of emergency, which prompted Cherokees to seriously consider the tribe’s future.

Now, there are multiple language revitalization programs available. In North Carolina, high school students are allowed to take a Cherokee language course to satisfy the state’s foreign language requirements. Robert Bushyhead, a prominent Cherokee elder, worked with a linguist before his death to compile a dictionary and grammar book which is now used in high schools and colleges.

The tribe has also added new words to their lexicon to avoid adopting anglicized words. The Cherokee Language Consortium was founded in 2007 for this purpose, and the very first word that they invented was O-’ZcT DfiVoJ (unole ayododi), the Cherokee word for “balloon.” Their adaption means, “It’s something you put air in.”

Young tribal members are also using Cherokee syllabary as emoticons, and are introducing their language and syllabary into Facebook, Google, Microsoft and other software programs.

The Pueblos consist of multiple Native tribes with similar cultural and religious backgrounds. These tribes, though similar, have vastly different languages derived from four unrelated language families. Each language is in danger of extinction. The Acoma Keres language, for example, has less than 100 remaining speakers.

Keres speakers have dubbed video clips and cartoons on YouTube to encourage youth interest in the language. The first cartoon they dubbed was an episode of “Spongebob Squarepants” and they also have started animating their own videos depicting tribal stories.

Other Pueblo languages have dictionaries and grammar books and young Natives can attend preparatory schools, after-school programs and weekend classes.

Since Pueblo languages were traditionally oral (as almost all other Native languages were), some Pueblo tribes don’t want their languages written down, presenting a unique situation to those who wish to know these languages.

Nevertheless, there are still resources for these tribes to learn their languages as they learn from the last few living elders who speak those languages fluently.

Even though the Navajo language is one of the most widely spoken Native American languages, it is still at risk of disappearing. The Navajo were one of the last to become bilingual — as late as 1930, 71 percent of Navajos spoke no English.

To reverse the effects of assimilation, the Navajo are encouraging younger generations to get involved in learning the language. Apps and YouTube videos have been created to facilitate youth involvement in language preservation, and there is even an app for toddlers to learn the language.

In addition, popular movies such as “Finding Nemo” and “Star Wars Episode IV: A New Hope” have been dubbed in the Navajo language. There are also Navajo-run immersion and charter schools dedicated to teaching children the language.

Hope for the Future

Though linguicide is currently the reality for almost every Native tribe, young people are taking initiative to learn their respective languages. Immersion schools and technology are two of the most effective resources for learning tribal languages.

Considering the traumatic history of education as a colonizing tool in Native communities, having schools run by fellow tribal members dedicated to teaching tribe-specific programs assists in encouraging students to look at education in a more positive light.

In addition, adding tribal words to apps and games gives kids a way to communicate with people their age in a modern way.

Young Native Americans are tribes’ most valuable resources. They recognize the severity of language loss and realize that they will cease to know their cultures when their languages die.

By learning and preserving their languages, young Natives are proving that their cultures and languages are not dying or antiquated, but are adaptable and can live forever.