The Indigenous Seed Growers Network sprouted from the pandemic, and is quickly evolving to help communities secure their own food systems for generations to come.

Growing up as a member of the Mohawk tribe, Kenny Perkins tended to his family’s garden with his siblings. They would practice traditional Mohawk gardening methods, including using fish guts as fertilizer and saving kernels from the white corn, but he didn’t know why.

“It’s a learned teaching. I was never really taught why we do things,” Perkins says. He wondered why they saved the corn silk, why some kernels were eaten and others were saved, and why they chose corncobs from specific parts of the field. Eventually, he probed his elders and peers with questions, and, now, years later, he uses what he learned as a professional seed saver and gardener working with the Akwesasne Task Force on the Environment in the Great Lakes Basin region of New York.

As a father and grandfather, Perkins is also able to teach his children and grandchildren about saving seeds—and he can respond to their questions with the answers he didn’t get growing up. He is also working with a new Indigenous seed exchange so other Native people can find the answers, too.

Within Indigenous and tribal food systems, the pandemic has prompted many to return to growing their own food. And as that interest has risen, it has also “illuminated the lack of seed at the community level,” says Rowen White, a member of the Mohawk tribe, an Indigenous seed steward, and organizer of the Regional Indigenous Seed Growers Cooperative.Get the latest articles in your inbox.

In response, the cooperative, a project born out of the Native American Food Sovereignty Alliance, worked to address the growing need for seed. In the spring, the alliance led a seed drive and distributed 11,000 packets of seed to 270 different tribal communities.

Eventually, though, the need far exceeded the demand, and the seed supply ran short. That’s when White and others decided to turn to a cooperative model that would allow Native people to share information, knowledge, and traditional practices as well as seeds. Many tribes already host their own seed exchanges, but White and her colleagues felt that there was room to grow a shared, intertribal understanding of traditional seed practices. 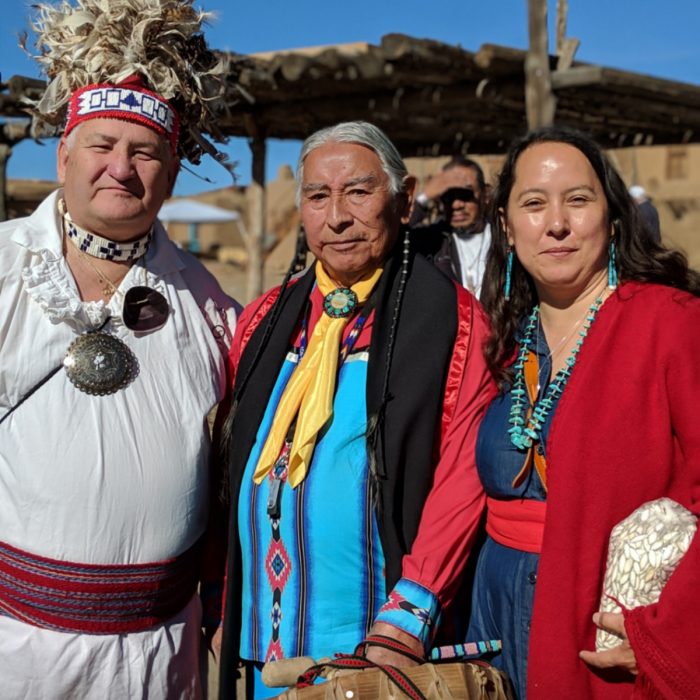 In recent months, the cooperative has hosted a seed census—a process not dissimilar to the U.S. Census—which involves identifying where seeds are located and how much seed supply each community has access to. The second project is a detailed seed sovereignty map of the same communities.

The cooperative is an ambitious undertaking, and getting it off the ground—hiring people to work with tribes to engage in seed saving conversations and to build an online platform for information sharing among other needs—will take time and money. Jessika Greendeer, a seed keeper, member of the Ho-Chunk Nation and farm manager at Dream of Wild Health, a Minneapolis-based Native food sovereignty organization, says that the cooperative started with monthly phone calls. The calls between growers including Greendeer and White were intended to share information and best practices about the seeds and plants they were growing. 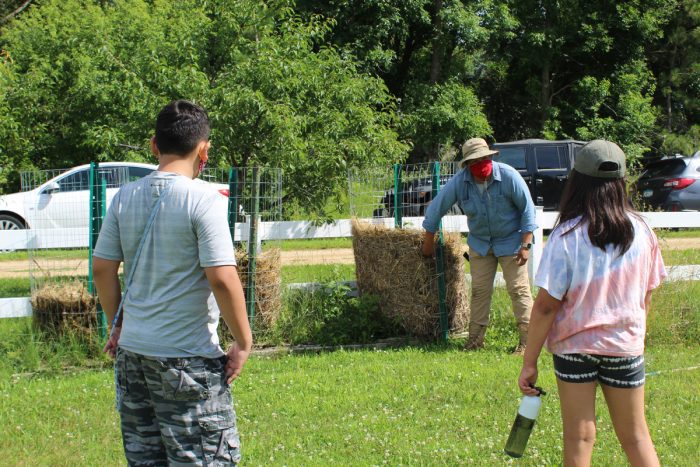 Seedkeeper and Seed Regeneration Manager Jessika Greendeer leading a lesson on composting with youth. (Photo by Dream of Wild Health)

While the goal of the network in the early days was to “get seeds into hands of so many people,” as they move forward and expand into a cooperative model, Greendeer says that as it has grown, and they’ve begin to work toward intertribal connection, food security, and the co-creation of a system that will help propagate seeds and assist non-growers in the journey of rematriation.

White has spent years hearing from tribal communities and conducting listening sessions. In those sessions, she heard again and again that seed knowledge was held by just a few older people, and that there was not enough traditional seeds to really feed the community. In response, the cooperative has also built a seed sovereignty assessment toolkit for each community. The hope, says White, is to find out how they can “support [the tribe] and create regenerative economic development opportunities.”

The seed growers cooperative is an extension of the work White has been doing to build seed sovereignty over the past two decades. As a 17-year-old, she interned on a farm in Massachusetts, where she fell in love with and developed a sense of gratitude for the seeds.

Both White’s grandparents and great grandparents tended to their own farms—but disease, genocide, boarding schools, forced relocation, and the legacies of each pushed them away from land.

This displacement wasn’t an accident, it was an intentional effort on the part of colonizers who wanted the land for themselves, says White. “The impacts of colonization, acculturation, and relocation have deeply impacted our ability to be on the land.” She hopes that the seed cooperative will help “revive ancestral knowledge” and begin to repair some of the trauma associated with that forced disconnect. There’s a coevolution of humans and seeds, White adds, and the two are “intimately intertwined and change one another. [There’s a] cultural memory that surrounds these seeds.” 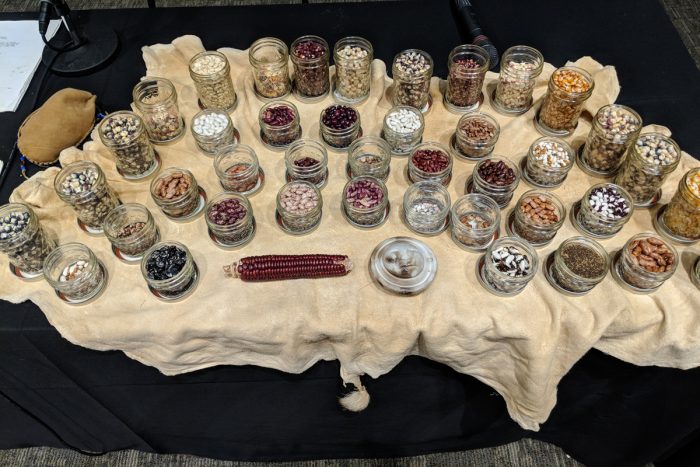 White grew up with the Mohawk creation story, which tells of a woman falling from the sky world to the ocean and bringing seeds with her to start a new world. She says there was an agreement between her ancestors and plants to co-evolve. “We would give up a little of our wildness and the plants would give up a little of their wildness,” White says. “We’re direct lineal descendants from the food that we eat.”

For that reasons, White explains, “We actually have to care for them as though they’re our relatives.” In reviving that relationship, White finds herself reflecting on the fact that—despite colonization, industrial agriculture, and genocide—“the seeds never gave up on their side of the agreement.”

And yet, she adds, “Many of us have forgotten to uphold our agreement to take care of the seeds.” In addition to building seed capacity across the nation and sharing knowledge, she says one of the most important aspects of the work is to ground oneself in the recognition that, “all of us eat because of the generosity of a seed. Part of this is remembering that we can’t abdicate that relationship to multinational corporations or to industry, monoculture, [or] corporate ag.”

Some seeds are easier to harvest than others, and growers know that they will have to eat fewer plants in order to save their seeds. This is knowledge that Greendeer didn’t have access to five years ago. Now, as a partner in the Seed Growers Cooperative and close friend of White’s, Greendeer says that harvesting seeds is a “balance of art and science together.”

Through her work at Dream of Wild Health, Greendeer has taught other Native growers how to observe and tend to each plant. To harvest lettuce seeds, for instance, a grower intentionally lets the plant produce flowers by keeping it in the ground past the point when you’d want to eat it. Green beans are different, Greendeer explains, you can wait for some beans on the plant to “dry down” and “still have plenty for eating.”

Saving the seeds for corn is a different process, says Rebecca Webster, a seed saver and farmer who lives on the Oneida Nation in Wisconsin. Webster says that when saving white corn, she looks for certain ideal characteristics such as where the seed sits, whether the cob is free of dents and dimples, and whether the cob has loose husks, before choosing to save it for seed. 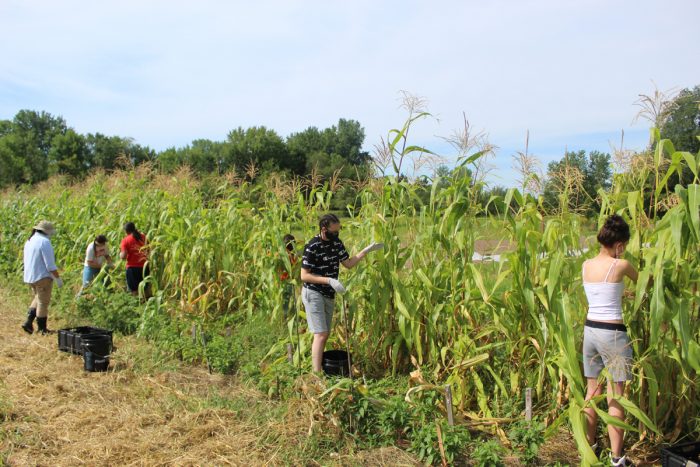 The whole process takes a few months. “We cut off the knobby ends and we braid the cobs, and then we hang them up in the barn to dry,” Webster says. Once they’re dry, they remove some kernels to test in a moisture meter to ensure that they’re properly dried out. Then they remove the kernels from the middle of the cob—those will be the healthiest seeds to grow a new crop with.

Greendeer says by the end of 2020 she hopes to launch the seed census. Greendeer and White want to know what different communities are growing, and whether they already have active seed saving programs or would need to start one from scratch. So far, they have about 20 seed census takers signed up, ranging in age from 19 to 64.

The information will allow the cooperative to take stock, redistribute seeds, and ultimately protect the seed that’s out there. “Instead of one person growing a variety, we’ve got five people growing it and that’s just to help protect the seed,” says Greendeer. If it’s sitting in a jar on somebody’s shelf, on the other hand, it could get too old and fail to germinate when it’s planted. “It needs to be in the hands of many people for it to continue to just keep getting stronger and more resilient every year.”

A cooperative can also help communities adapt to contemporary conditions, such as the warming climate and more extreme weather, as well as some tribes’ lack of land, arable soil, or irrigation. White says that due to “significant land loss, we have to adapt these old traditions to new circumstances.”

The Indigenous Seed Growers Network has already modeled the kind of workshops the cooperative will scale up in the coming months, and White says that they’re in the process of fundraising to provide stipends to young farmers, interns who can package seeds, and pay for seed cleaning equipment such as screens and fanning mills.

Seeds themselves may have survived their own trauma, says Elana Terry, a Ho-chunk chef based in Wisconsin. Terry recently received a bean in the mail from a seed steward in the Appalachian mountains that can be traced to the Ho-chunk from the early 1800s. “It was grown by Ho-chunks, then we were moved and that seed traveled with us during the move,” says Terry. The seeds were planted in their new home for generations before making it back to their original tribal lands. “After all this time, the seeds rematriated themselves home,” she says.

Greendeer holds a similar perspective. She says her work with seeds has pushed her to reflect on how she, as a grower, gets to witness the lifecycle of small yet powerful seeds. “That’s their sole purpose in life: to sacrifice themselves. To not only be food for humans and wildlife but also to reproduce again. And what’s so beautiful about [seed-saving] work is that you get to be a part of that.”

White says seed stewardship allows to connect with her identity as an Indigenous woman and mother more deeply. It also inspires her to ask, “What does it mean to be a good ancestor . . . and a responsible descendant at the same time?”