An Indigenous Corn Makes a Comeback

In New York, the Iroquois White Corn Project is reviving an ancient and sacred variety of white corn in hopes of improving Native nutrition and health. 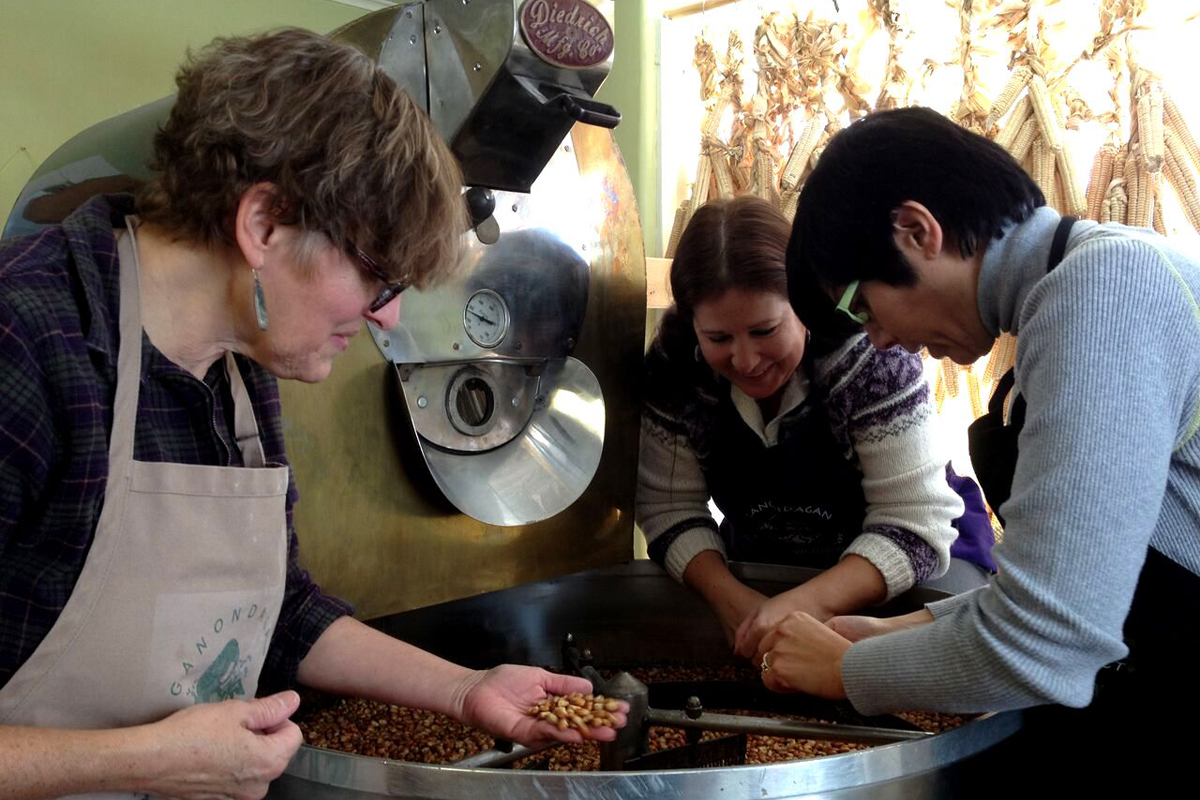 Inside an antique farmhouse at the Ganondagan State Historic Site just east of Rochester, New York, a stainless steel coffee roaster hums as it parches Iroquois White Corn with heat, increasing its digestibility. Once the process is complete, after about 20 minutes, Iroquois Corn Project volunteers and staff will use a stone grinder to create corn flour they then sell to the public.

This is the home of the Iroquois White Corn Project, whose mission is to preserve and promote an indigenous strain of corn that has been prized by local Iroquois for 1,000 years. With three products—Iroquois hulled corn, corn flour, and roasted corn flour—the project operates out of the nonprofit at Ganondagan, where the Seneca, a community of Iroquoian-speaking peoples, thrived more than 350 years ago.

“The mission of the Iroquois White Corn Project is to encourage Haudenosaunee [Iroquois] farmers to grow the corn and to eat it for more than just special occasions or ceremonial use—[making it] something they eat every day,” said Jeanette Miller, program director for Friends of Ganondaganand a member of the Mohawk tribe of the Iroquois Confederacy. Once hulled, the indigenous corn can be used in soups, stews, salads, and more, and the flour can be used to make breading, mush, cornbread, cookies, cakes, and other baked goods.

“We started playing with the corn and trying different recipes… and everyone started to really enjoy it,” Miller said. “[We encourage people to] grow their own gardens and get Iroquois White Corn back on their tables for their families.”

Founded in its current location in 2011 by G. Peter Jemison, Ganondagan Historic Site manager and a member of the Heron Clan of the Seneca Nation of Indians, the Iroquois White Corn Project currently yields an average of 5,000 pounds per year, and they expect to grow that number considerably in the coming years. Project managers sell the corn to grocery stores, farmers’ markets, and individuals, and they hope to one day break into the market of chefs who focus on using indigenous ingredients.

Across the country, a number of individuals and groups, from Louisiana to Nebraska and New England to Arizona, are also working to propagate native corn in hopes of preserving history and tradition and taking advantage of the plants’ nutritional value.

“There are [many Native] people raising, picking, and storing corn, and they’re also eating it,” Jemison said. “We were supplying the Seneca Nation with white corn [but] after our talks and demonstrations, they now are setting up their own project and will be processing their own corn,” he said. “This was our goal.” 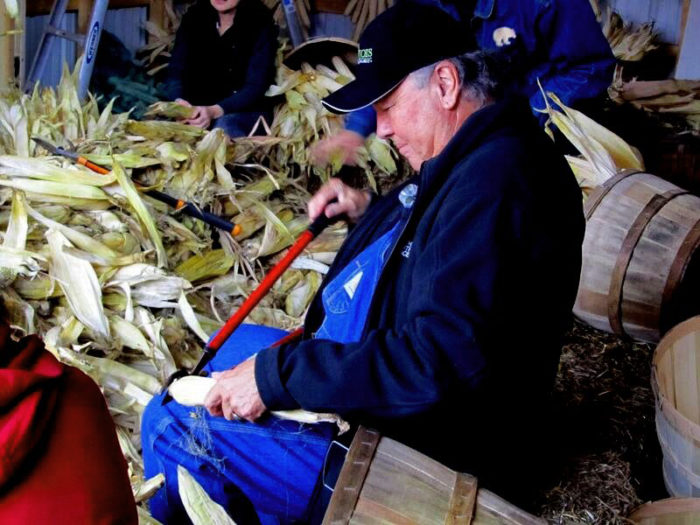 Nutritionally, the corn variety is gluten free; low in sugar; high in fiber, protein, and slow-releasing carbohydrates; it’s also packed with amino acids that help to build healthy cells. Jemison hopes it can start to improve the health of the Iroquois people, who face a number of diet-related health issues. According to the American Diabetes Association, Native peoples throughout the U.S. have the highest rate of diabetes of any ethnic group, with nearly 16 percent of tribal members affected. Limited access to healthy, fresh food has exacerbated the problem.

“The sincere hope of [the project’s original founder], John Mohawk, was that by putting Native food back on our tables, we might grow healthier,” Jemison said. “Could it be possible that if we return to a more Native diet, we could really combat diabetes?”

History in the Making

Traditional “sweet corn” sold at grocery stores across the U.S. is usually yellow in color, edible directly from the cob, and features high sugar content and a completely digestible hull. Iroquois White Corn, however, is a flour corn with a subtle, slightly nutty flavor and ears that are longer, wider, and heavier than sweet corn.

Historically, Iroquois women raised, planted, weeded, protected, harvested, braided, dried, shelled, and cooked the dietary staple. When the French army and its allies attacked what is now Ganondagan and three other Seneca towns in 1687, however, they destroyed nearly 1.3 million bushels of corn. Later, during the Revolutionary War, George Washington ordered Army troops to devastate and destroy Seneca settlements, ruining planted crops including 350,000 bushels of corn. 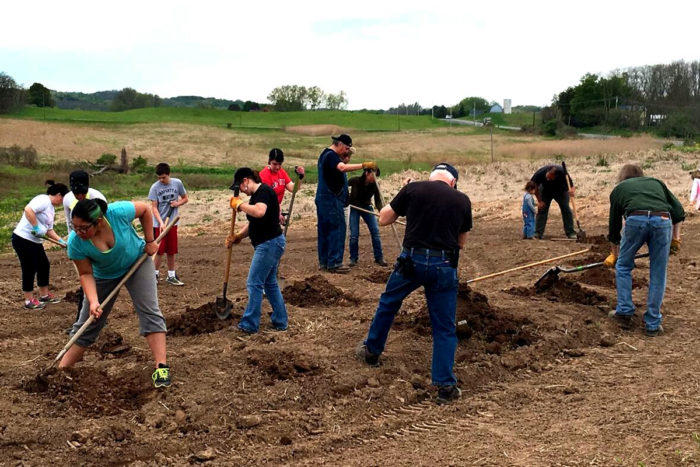 Although the Seneca continued farming, their constant need to move and reestablish their communities was devastating. Simultaneously, white ministers and educators insisted that Seneca men become the farmers, rather than Seneca women, further disrupting their traditional way of life.

Although Jemison has run the project out of Ganondagan for the last seven years, Dr. John Mohawk and his wife, Dr. Yvonne Dion Buffalo, originally founded it in the 1990s on the Cattaraugus Reservation, approximately two hours’ drive from Ganondagan. Jemison became involved with the project as John and Yvonne were establishing it, but when they died in 2005 and 2006, everything came to a screeching halt. Three to four years after their deaths, Jemison decided to re-start the project at Ganondagan, providing a stream of income for the Friends of Ganondagan group that supports the park.

“At a site like ours, you’re at the actual location where our people lived in the 1700s,” Jemison said. “You’ll see one of our traditional houses and our traditional plants, [and] the Iroquois White Corn Project is part of the total. Unfortunately, most Americans know very little about Native Americans. There’s not a whole of information about [us] in textbooks.”

Today, the project operates cooperatively with the Seneca-Iroquois National Museum. Interns and volunteer Friends of Ganondagan support the small staff that runs the project. As noted on its website, and true to the cultural roots that surround growing and use of this sacred corn, project organizers request that those who work with it today do so with a good mind, “bringing love and good intentions to the process while acknowledging the Creator and Mother Earth.” 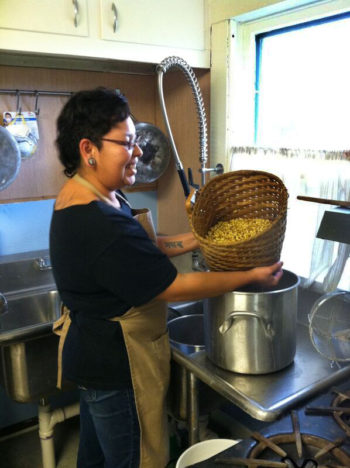 Growing and processing Iroquois white corn takes considerable time and effort. Native American or First Nations’ farmers, who buy seed directly from the Project, must hand-plant and hand-pick the crop. The harvest occurs in October or early November.

Jemison also had to find individuals who could learn the entire process of preparing the corn, which has to be de-hulled, roasted, ground, and packaged in small batches. He sought out young people entering the job market and grant money enabled him to provide them with a decent wage.

Project leaders adapted the traditional cooking process to cut down on the amount of work. “We took away the time-consuming part of cooking and processing of the corn [traditionally, which used] hard wood ash to remove the hull from each kernel,” he said. Instead, the project workers use culinary lime, which accomplishes the same results.  Washing the corn helps to remove the rest of the hull.

“We then hold a husking bee and braid the ears of corn together 30-plus at a time,” Jemison said. “We hang the corn to dry until April or May, and then it is hand-shelled from the cob, [washed, and sorted]. “This is ideally a community-based effort,” Jemison continued. And like all farming, it is subject to the uncertainty of weather.

Because Iroquois white corn products are so labor-intensive, they’re costly to make. “Farmers who grow the corn don’t see this as a get-rich-quick scheme,” Jemison said. “But because we provide markets for them, it encourages them to do this.” 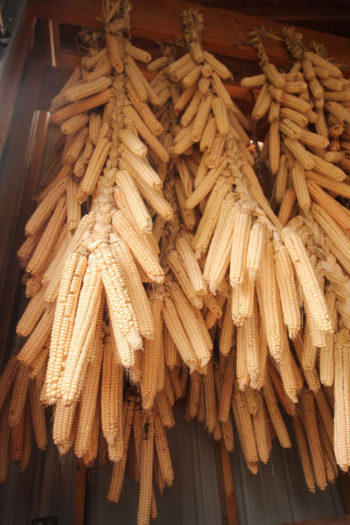 Jemison says the process is worth the effort. “I think it’s important to keep growing food that has an ancient history, originates in the Americas, and is native to the area you come from,” he said.

He hopes that ultimately, the Iroquois White Corn Project will sustain itself; the Iroquois people will be able to raise more of their own corn and support farmers; and health outcomes will improve.

“This is the food that our Creator provided us with,” Jemison said. “Because so much corn was destroyed at Ganondagan, we believe it is very important to grow it and sell it here. [Food opens doors], especially when you sit down and eat together.”