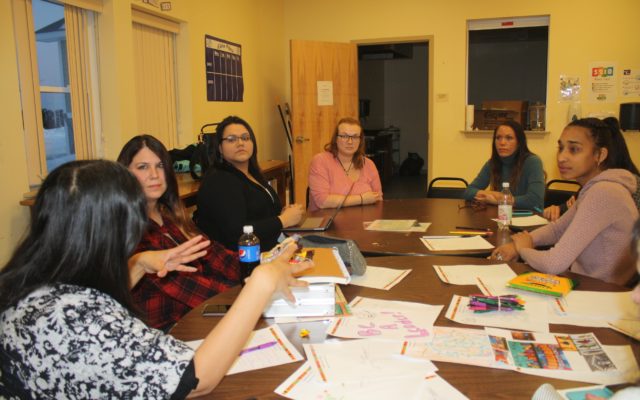 PRESQUE ISLE, Maine — Folks from the Aroostook Band of Micmacs and Presque Isle Boys and Girls Club are making plans to create a community mural that they hope will inspire youth to reflect on and appreciate Native culture and the world around them.

The first ever community mural will be located in the Power Hour room of the Boys and Girls Club, with staff members, volunteers and partners from Wabanaki Public Health hoping to choose and paint a design by the end of February. On Friday, Jan. 25, the club hosted the first of many planned meetings to hear public input on possible themes for the mural and what the final design might look like.

“We want the mural to symbolize community,” said Fenton Jones, program coordinator and public relations director for the Presque Isle Boys and Girls Club. “Right now we’re at the brainstorming stage, but we’d like to find images that empower youth, symbolize Micmac culture, and bring young and older generations together.”

During Friday’s meeting Jones and eight other community members shared their own thoughts on how the mural could answer the question, “What does community look like to you?” Many people suggested not only incorporating cultural images such as the drum, which symbolizes the “heartbeat of Mother Earth,” medicine wheels and sacred fire, but also the influences of elders and ancestors on the younger generations and the personal relationships that bind their community.

Roldena Sanipass, a member of the Micmac community who earned her fine art degree from the University of Maine at Presque Isle in 2016, would love for the mural to teach children about cultural identity, respect for elders and how the community carries on their traditions while living in the modern world.

“It would be great to show how all the little parts of our community are connected,” Sanipass said.

Jones noted that more planning meetings for the mural will be held at later dates and announced on the Presque Isle Boys and Girls Club Facebook page.

“We want to involve the entire community and get their input so that this could be an art project that stays around forever,” he said.