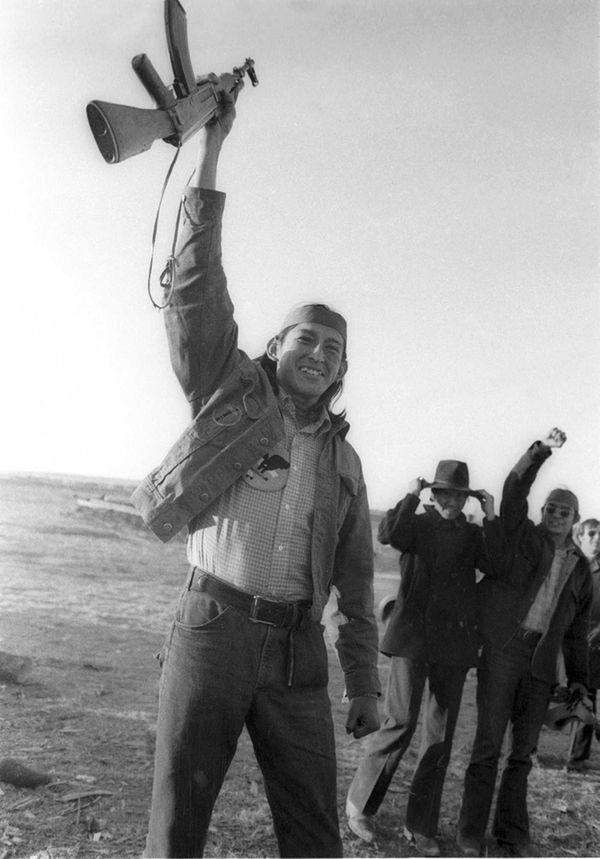 Robert Onco, Indian rights activist Robert Onco, a Kiowa Indian from Oklahoma who fought for Indian rights at Wounded Knee and is the step  father of Shinnecock trustee David Taobi Silva, died after a battle with lung cancer. The Vietnam veteran was 63.

Robert Charles Onco, a Kiowa Indian from Oklahoma who was active in the American Indian Movement and its role in the 1973 siege at Wounded Knee, S.D., died last week of lung cancer. The Vietnam-era veteran and resident of the Shinnecock Indian Nation reservation in Southampton was 63.

Bobby Onco, as he was known, became a symbol of Native American protest and pride when he was photographed holding up an assault rifle following the 71-day siege at Wounded Knee. The protest took issue with the U.S. government’s legacy of broken tribal treaties and a corrupt local tribal government. A weapons charge was eventually filed against Onco because the rifle he brandished in the photograph was unlicensed, according to press reports at the time. He was sentenced to a year of probation.

David Taobi Silva, a Shinnecock Indian Nation trustee and Onco’s stepson, said his stepfather was active in the American Indian Movement at Wounded Knee, escorting tribal women on the Pine Ridge Indian Reservation during the siege. Silva noted that the assault rifle Onco brandished in the iconic photograph had no ammunition in it.

Onco traveled east after the siege, Silva said, settling in Queens in the shadow of the former Shea Stadium and learning a trade as a plumber.

His fondness for travel earned him the Kiowa name “Daum-To-Yai,” or “Traveler to Other Countries.”

That spirit ultimately brought him to the Shinnecock Nation. There, he met the former Jacqueline Smith, whom he married in 1988. The couple had two children, Robert “B.J.” Tangnaqudo Onco and Lacina Tangnaqudo Onco. Smith had two children from a previous marriage. Onco taught his stepson the plumbing trade and built the couple’s reservation home.

At Shinnecock, Onco was revered as a man with a sense of humor and a spiritual leader, a “real medicine man,” who organized sweat lodges and spiritual healing, Silva said.

Onco also worked as a plumber at the Brookhaven National Lab before he eventually centered his trade around Southampton and the reservation, where he worked for tribal members at half the going rate. “He would always say, ‘I just need enough to get by,’ ” Silva said.

His stepfather was proud to be Native American, Silva said, and encouraged that spirit in others.

A funeral was held Wednesday at the Shinnecock Presbyterian Church by Onco’s longtime friend, the Rev. Michael F. Smith. He was buried with military honors in the Shinnecock Cemetery.

Despite his high-profile role at Wounded Knee, Onco was not one for the limelight, said his stepson. “There are a lot of people that want to be the chiefs. Bobby was OK with just being an Indian.”