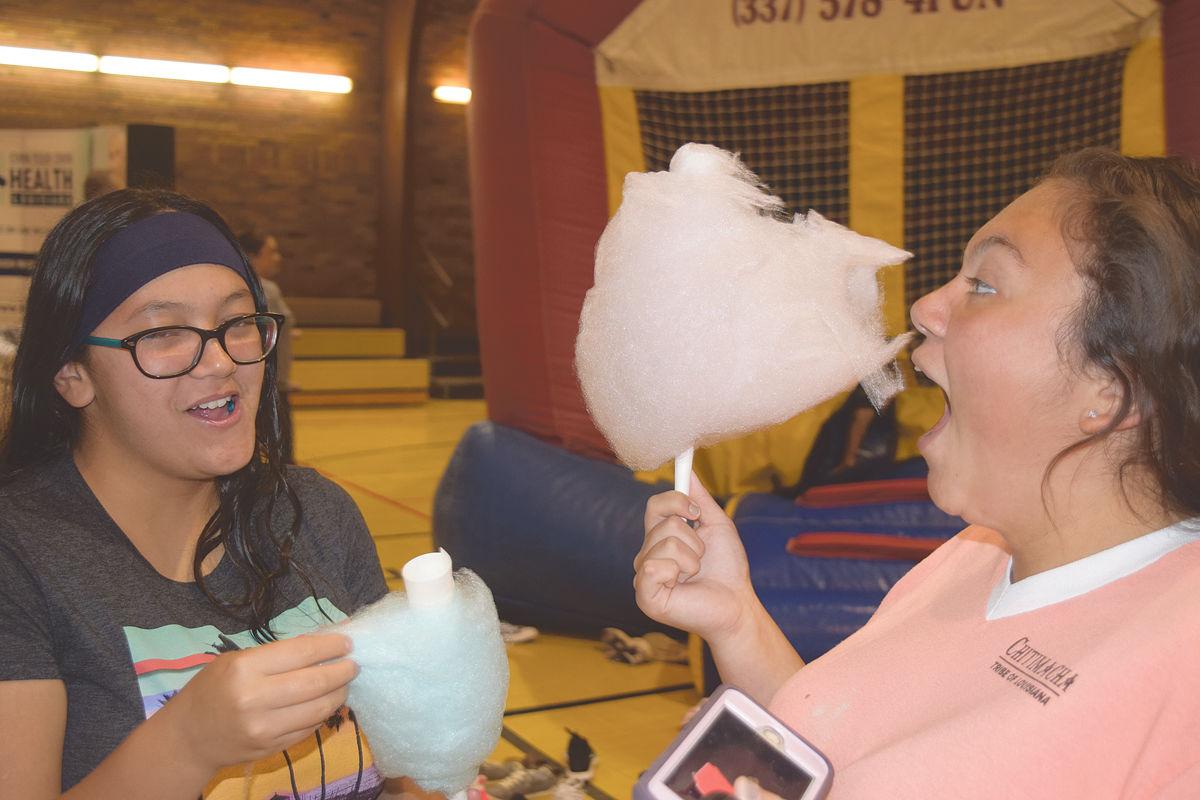 Chitimacha tribal members Mary Lou Rojas and MaKenzie Broussard enjoy some cotton candy they got from the Muscular Dystrophy Association booth on Tuesday. 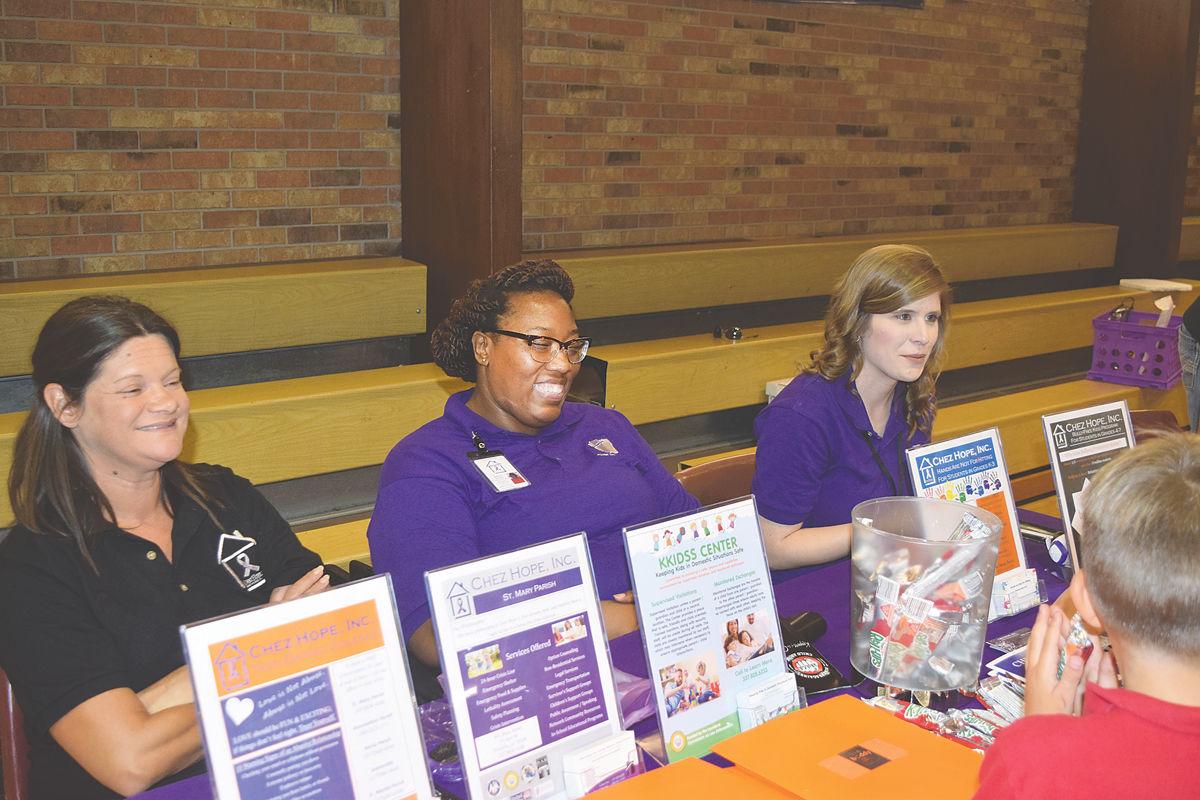 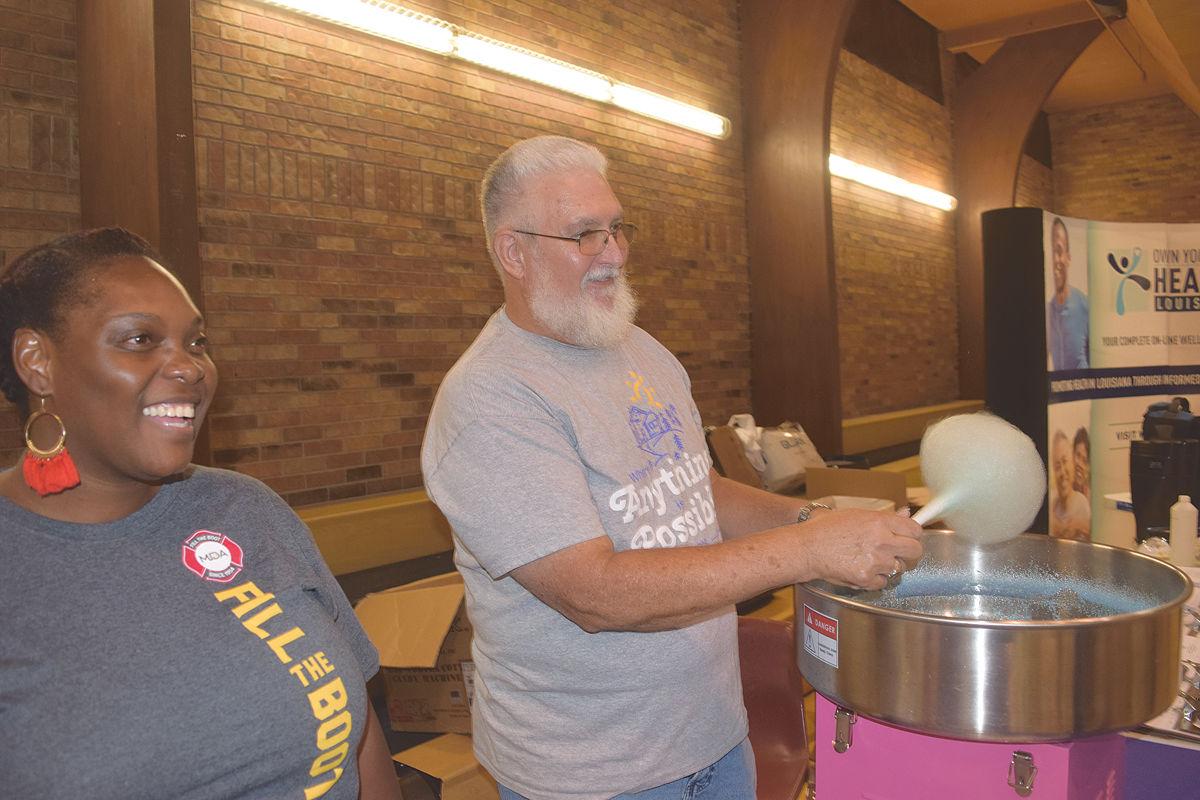 Muscular Dystrophy Association representatives Mickey Edmond and Randy Hopper enjoy giving the crowd cotton candy as they stop by their booth at Tuesday’s National Night Out. 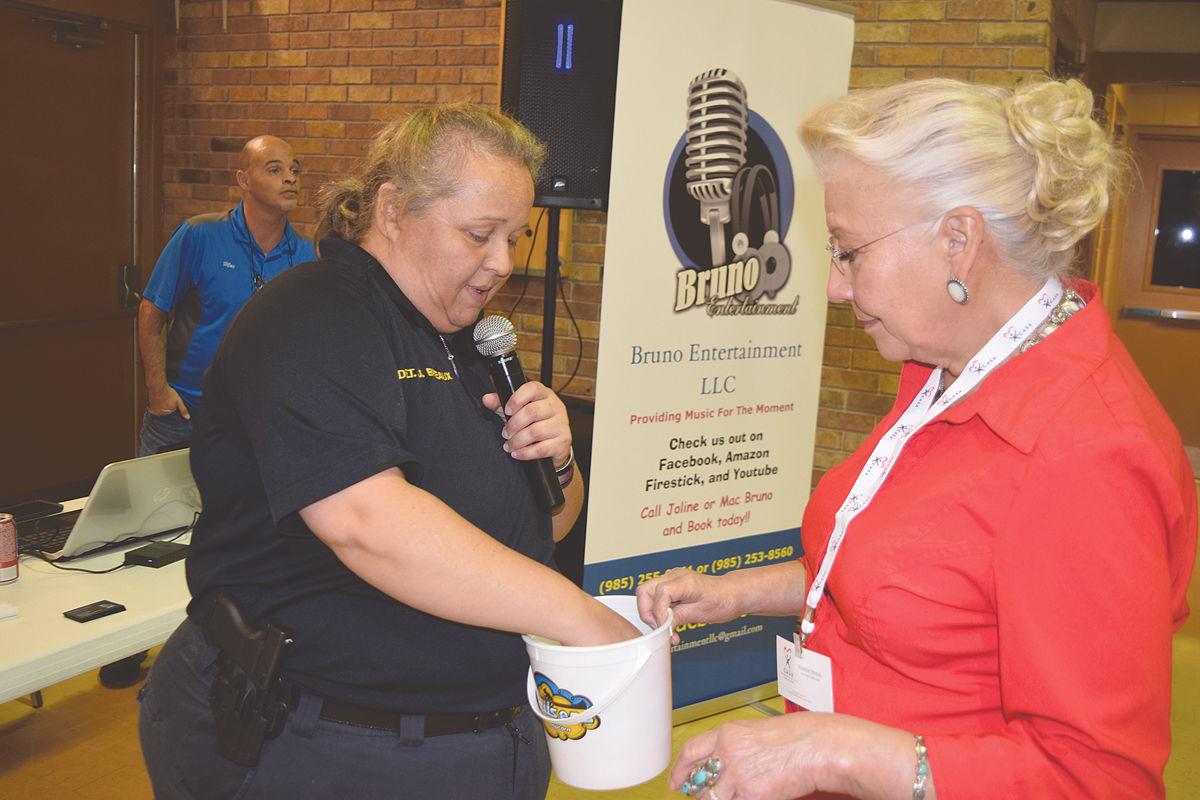 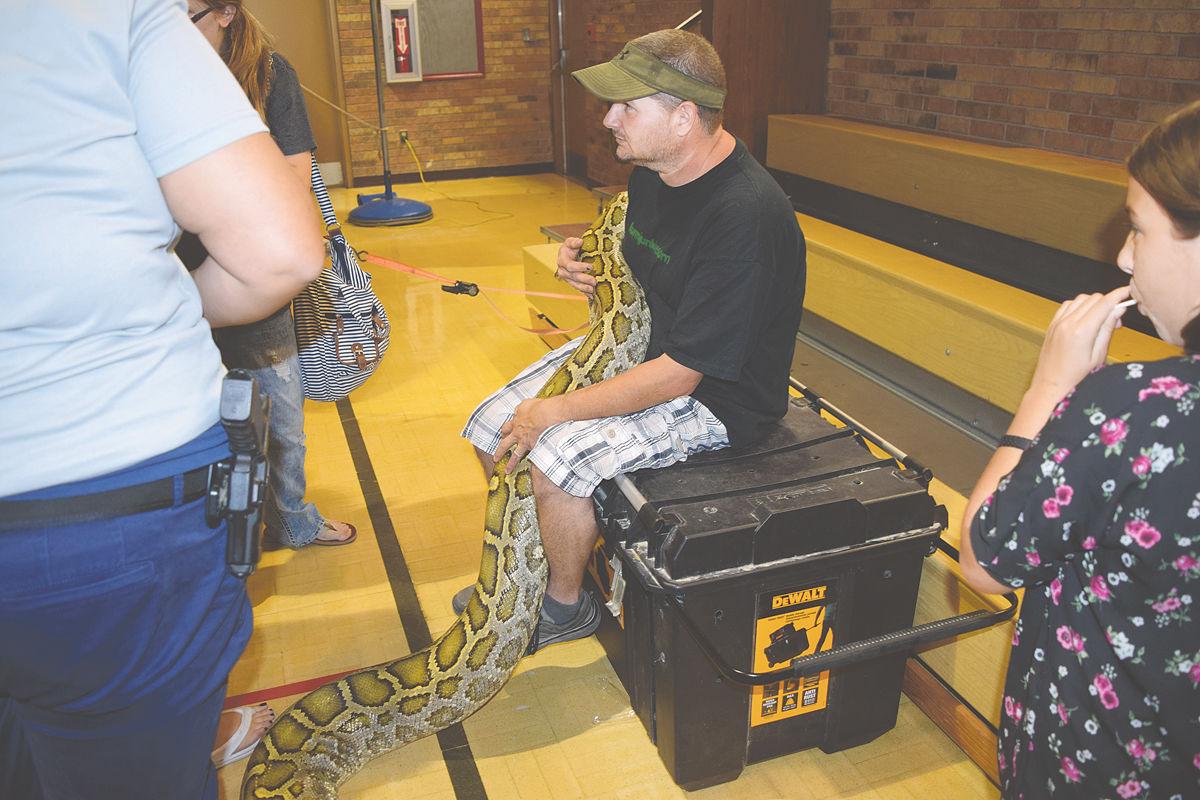 Beanie Villermin with Acadian Enclosures and Exotics holds a 17-foot Burmese Python as a crowd attraction while participating in Chitimacha Police’s National Night Out in Charenton. 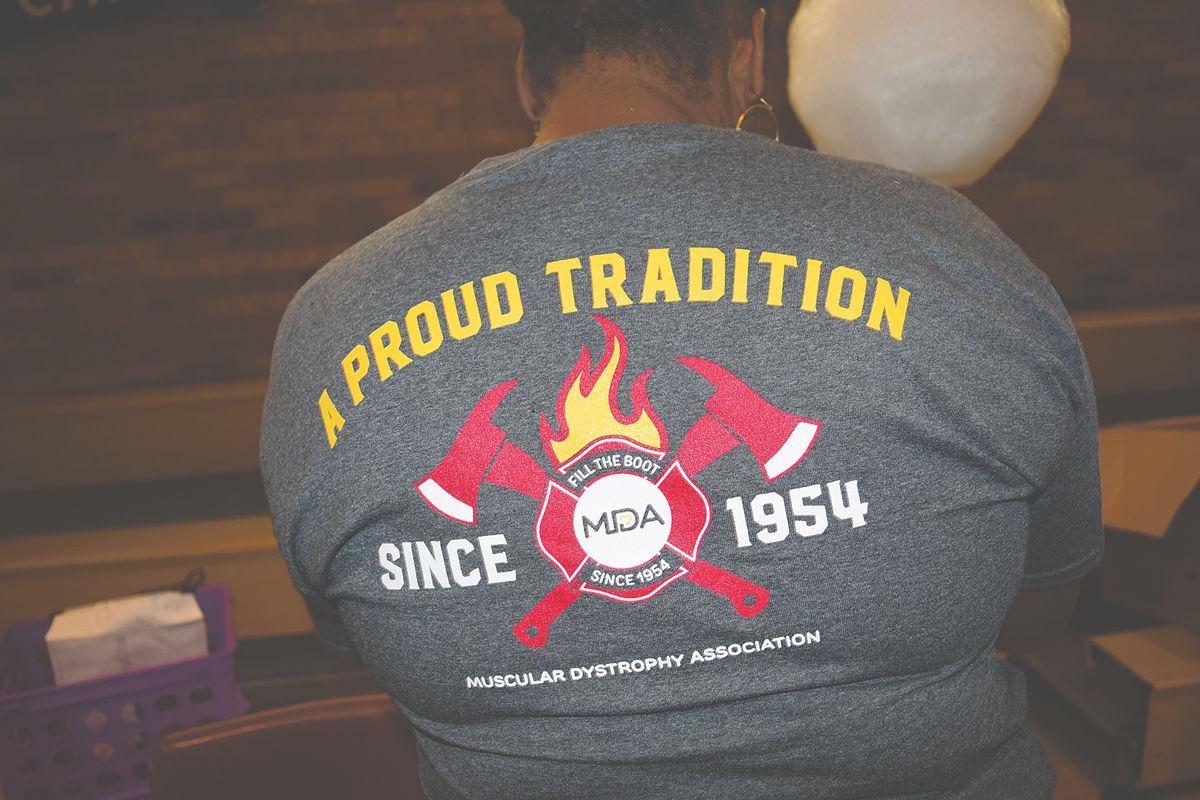 “More importantly to send a message to the criminal in the area and across the Nation that we as a community are no longer going to tolerate their criminal activities in our neighborhoods,” Breaux said.

The message has become popular among residents of the reservation who have began to look forward to National Night Out each year.

“This is our third year coming. We love it. I brought my two grandsons,” Lisa Dantin of Charenton said.

“It teaches us to come together and trust the cops. The health fair is going on too. It’s a good event,” the grandmother said while her grandson, Conner Simoneaux, petted a 17-foot Burmese python on display for kids.

“It’s very informative for  kids and they talk about issues like health and problems like bullying and sexual abuse, and physical abuse,” tribal member MaKenzie Broussard said after visiting the Chez Hope table.

“A lot of tribal members go through abusive relationships or they are in abusive homes, so I think it’s very important for us to learn how we can help ourselves and help each other so we can become a better community,” Broussard said.

Chitimacha Police Chief Hal Hutchinson said its important for residents to have an opportunity  to visit with police in a friendly, peaceful setting as well as collect information they may not have known was available had they not come out.

“People didn’t realize that they had all this available to them,” Hutchinson said.

“They thought they just had access to human services here on the reservation. Groups like BACA (Biker Association Against Child Abuse)  and CASA  (Court Appointed Special Advocates) and Hearts of Hope really help the community,” he said.

Eleven different agencies were represented at the community event as well as the St. Mary Parish Sheriff’s Office and the Franklin Police Department.

“For the Chitimacha Tribe we wanted to see who is prepared and who is  not in the event of a natural disaster or pandemic flu outbreak,”  Rudy Macklin, executive director of the Bureau of Minority Health Access, said.

“We have them fill out a survey to see who is prepared and who is not and if they are not we let the tribe know to help assist them,” Macklin said.

Organizers have been hosting the National Night Out for approximately the last seven years.

Melissa Darden, chairwoman of the Chitimacha Tribe, was glad to see so many people enjoying themselves.

“I hope the information given prepares them for the needs they have. This event helps give information and bring people together. It normally has a very good turn out,” she said.