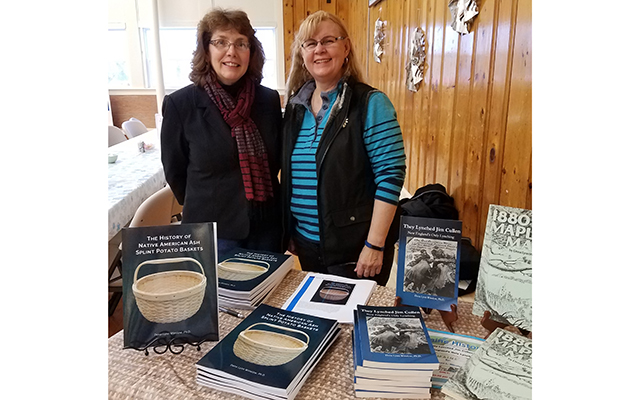 Dena Winslow, right, was on hand at the Southern Aroostook Agricultural Museum’s membership supper on Jan. 20 to introduce her new book, “The History of Native American Ash Splint Potato Baskets.” With Winslow is Debbie Melvin, secretary of the museum. The book details accounts of the largest authentic potato basket project funded by Maine Community Foundations for the museum. (contributed photo/karen donato)

MAPLETON, Maine — Mapleton native, Dena Winslow has just written the first book documenting the history of the potato basket. The book entitled, “The History of the Native American Ash Splint Potato Basket” presents the history of potato farming in Aroostook County and neighboring New Brunswick, Canada, and how the County farmers and local Native Americans relied on each other.

The book encompasses the evolution of farming practices from the 1800s to the present day. It describes the early design and construction techniques of baskets and the development of the more sturdy potato basket of the last 75 years. It also follows the early farming practices and the transition from using horses and manual labor to the mechanical equipment that was invented over time. 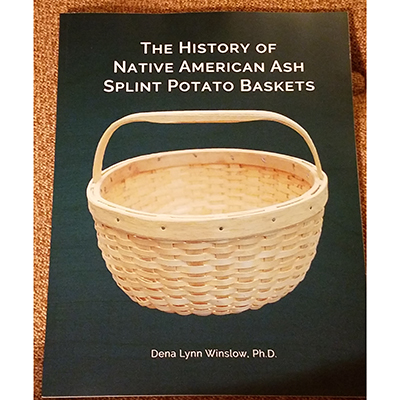 The cover of the newest book written by Dena Winslow of Presque Isle.
(Courtesy of Karen Donato)

Growing up on a farm and picking potatoes as a young child, Winslow is no stranger to potato baskets and the Micmac culture. As a child, she came to know a Micmac woman, Mary Christmas Chase, for whom the book is dedicated.

Chase’s husband worked for Winslow’s grandfather. The couple lived in a house trailer on the Winslow farm. Chase taught Winslow how to identify the black or brown ash tree, cut it, pound it with the back on an axe and to separate the growth rings into strips that would become the potato basket. It was from her, that she learned not only how to make a basket, but about the Micmac way of life.

“I didn’t plan to write a book about potato baskets,” said Winslow. However, when Richard Silliboy, vice-chief of the Micmacs shared the idea of making the largest authentic potato basket for the agricultural museum in Littleton, Winslow became involved. As the tribal planner and grant writer for the Aroostook Band of Micmacs in Presque Isle, she fit the need to assist with a grant for the project.

“Richard and the board of the agricultural museum needed a grant to cover labor and supplies and since that was my area of expertise we began working together on the project,” said Winslow.

The grant was funded through Maine Community Foundations and the museum received $8,680 for the project. Included in the grant were also funds to cover still photos and a video of the process. Through this collaboration, an idea for a book evolved from the project. Winslow thought being a consultant for the history of the basket would be pretty simple, until she discovered that there was no documentation.

Starting from scratch she visited museums, libraries, researched online and conducted interviews with people who were able to share their knowledge or experiences with her. She learned that the ash splint baskets originated in Maine and the Maritime provinces of Canada and included the Maliseet, Micmac, Penobscot and Passamaquoddy tribes, often times referred to as “Wabanaki” or “People of the Dawnland.”

Winslow gathered as many photos as she could, but came to realize the photos of those who created the baskets were practically non-existent. Winslow used newspaper articles and picture postcards as additional resources. The project has become even more significant with the written history and photographs included in this endeavor.

This book is a treasure trove of information, even if one is a lifelong resident and lived the life of picking potatoes every fall. It will be a resource for years to come. Unfortunately Winslow discovered that there is an invasive insect that is destroying the ash trees throughout the United States and Canada. The Emerald Ash Borer is believed to have been brought here from China in shipping pallets in early 2000. It is known to be in Quebec and New Hampshire and is moving this way. If it makes its way into Maine the basket making tradition could vanish without a supply of ash trees to make the baskets.

The Southern Aroostook Agricultural Museum hosted its annual membership dinner on Jan. 20, where the basket was on display. Silliboy was the featured speaker, along with Winslow who introduced her book to the audience.

The 25 books she had on hand sold out quickly. The paperback book sells for $20 and is now available online through Amazon. Other books she has authored include: “Mapleton, Maine”, “A History of Ashland, Maine” and “They Lynched Jim Cullen”. She has also contributed to other books and written newspaper and magazine articles.

Winslow graduated from Presque Isle High School in 1971. She furthered her education at the University of Maine at Presque Isle, earning a degree in English in 1975. With her degree she taught in Milo, Ashland and Mars Hill. During her career she earned the distinguished honor of being, “Maine Teacher of the Year in 1989”. This honor was sponsored by the IBM Corporation. Winslow went on to receive her masters in educational leadership from the University of Southern Maine and her doctorate in history at the Orono campus.

The museum board members anticipate the basket display to attract many visitors in the upcoming season. The basket is on display in the museum gymnasium at the present time, but will be moved to a permanent area in the Grass Tool Room before the summer tour season begins in June.