Shane Red Hawk of the Sioux Tribe from South Dakota, center, rides a horse with other Native Americans, farmers, ranchers and cowboys during the ‘Reject and Protect’ rally to protest against the Keystone XL pipeline on Tuesday.

Horses walking through the streets of the U.S. capital. Teepee tents and a settler wagon adorning the National Mall. Self-described “Cowboys and Indians” in traditional clothing, promising to fight together against a common foe.

This week will produce more than a few such memorable images as anti-pipeline “Reject and Protect” protesters gather in Washington, D.C., to pound the Obama administration with a visual demonstration of their opposition to Keystone XL.

The 2,700-kilometre TransCanada pipeline would move bitumen from Alberta’s oilsands to refineries on the Gulf Coast of Texas.

The six-day event is designed to send the message that whatever the president decides — whenever he decides it — there will still be pockets of resistance to the pipeline in aboriginal and farming communities along the route.

The event was planned a while ago, when it still seemed a Keystone decision might be imminent. Now that the administration has paused the process, perhaps for a year, protest organizers have a new objective: make President Barack Obama remember them.

“We came to D.C. with a lot of resolve to make sure that the president sees our faces, and sees the images of cowboys and tribes working together,” said Jane Kleeb, a Nebraska political activist who has helped lead the anti-Keystone movement.

“We think those messages from the communities that will be directly impacted will stay with the president, whether he’s making a decision today or a decision in 2015.”

Polls have consistently shown support for the pipeline in the United States — even in Nebraska, where the project is ensnared in a legal dispute. But a minority of Nebraska landowners have kept up a fight against the project, with some success in an ongoing court case.

This week’s protest is trying to put a face on that opposition, under the guise of a group called the C.I.A. — the “Cowboy and Indian Alliance.”

It kicked off the event Tuesday with traditional aboriginal ceremonies in which presents were exchanged, 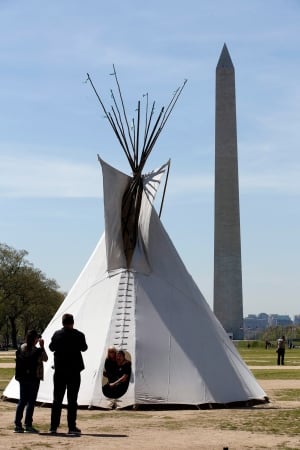 teepees were set up, and prayers were offered at the water in front of the U.S. Capitol building.

A few dozen protesters took part in Tuesday’s opening, which was covered by a similarly-sized contingent of a few dozen media from the U.S. and elsewhere. But organizers predicted thousands more would join the protest throughout the week.

One protest will take place outside the home of Secretary of State John Kerry, whose department is leading the Keystone review. Kerry’s department announced over the Easter holiday weekend that it would not issue its recommendation on the permit to Obama amid the uncertainty in Nebraska.

The group also promises some civil disobedience Thursday. Numerous participants have taken part in civil-disobedience training, including how to organize legal help and de-escalate conflict at a tense scene. There have been numerous arrests at past Keystone XL protests.

One participant Tuesday was from a First Nation community in Alberta.

Crystal Lameman said she wanted the American administration to know the oil industry could also face resistance in Canada. Lameman pointed out the six-year court battle, launched by her Beaver Lake Cree, over alleged treaty violations by governments and the oil industry.

“We have every major oil company in the world in our traditional hunting territory,” said Lameman, who is also a climate and energy campaigner at Sierra Club Canada.

“We say to Obama that we have — in Canada, First Nations people have — the constitutional power to stop this pipeline.”

The lawsuit from Beaver Lake Cree, which lists more than 16,000 oilsands permits, argues that those projects have cumulatively, over an area of 34,000 square kilometres, eroded hunting and fishing rights guaranteed under the 1876 agreement of Treaty 6.

That treaty gave the Crown authority over central Alberta and Saskatchewan, in exchange for some guarantees. First Nations were promised they could continue hunting and fishing throughout the area, subject to occasional regulations and use “from time to time” for mining, lumbering, settlement, or other purposes laid out by the Government of Canada or its duly authorized subjects.

The suit demands compensation, with compound interest. It also requests a halt in activities found to violate treaty rights.

“The purpose is not to completely halt tar sands development. I don’t parade around saying, ‘Shut down the tar sands,”‘ Lameman said.