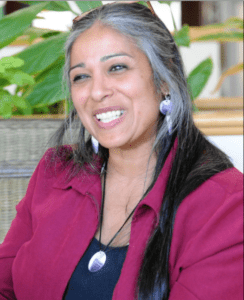 With 40 years of experience, and as chairwoman of the Wampanoag Tribe of Gay Head Aquinnah, she works to ensure that the tribe’s rights are upheld and is responsible for the overall welfare of the tribal community.

Recently, Andrews-Maltais was honored at the 24th annual National Indian Women’s “Supporting Each Other” Luncheon in Washington, D.C., and was named Woman of the Year.

“It is such a humbling honor to be recognized. Being a tribal leader can sometimes feel like and uphill battle,” said Andrews-Maltais, explaining that tribal leaders often have greater responsibility than most politicians as their constituents are their extended family. “The work is 24/7, 365 days a year, so to be recognized by your peers, especially women, is so humbling.”

Massachusetts Sen. Elizabeth Warren nominated Andrews-Maltais for the award and made a surprise appearance at the event to introduce her.

“I was blown away to be introduced by a presidential candidate,” Andrews-Maltais said, mentioning she is a supporter of Warren’s for the behind the scenes work she does for Indian Country.

Warren called Andrews-Maltais “a fighter who looks out not just for her community on Martha’s Vineyard, but for Native people everywhere.”

This was echoed by Andrews-Maltais’s sister, New Bedford City Councilor and director at the Bristol County Sheriff’s Office Naomi Carney, too. “She’s worked very hard to move the tribe forward, and in each decision, asks herself how it will impact Indian Country as a whole.”

Also in attendance was Andrews-Maltais’s 90-year-old mother, New Bedford resident Edith Andrews, who had served on the Aquinnah Tribal Council. “I am so full of pride,” said Andrews. “In each generation, we try to instill a pride for our heritage, and I am so proud that all of my children are involved with the tribe in some way.”

Andrews-Maltais, a graduate from Dartmouth High School, is one of five children, and though the family grew up on the mainland, would travel to Martha’s Vineyard for tribal meetings and to visit family over the summer. “We were the generation that grew up off the island, but it always felt like home.”

After working as a young adult in Boston for over 10 years in the fast-paced business world in managerial positions in marketing and sales, Andrews-Maltais and her husband, Dan Maltais, moved permanently to the island with their then young daughter, Samantha.

“He’s the most supportive and loving husband,” Andrews-Maltais said of her husband of 26 years. “My position impacts everything we do. Sometimes it’s a hard day, but he’s always there through the good and the bad with a hug telling me tomorrow’s a better day.”

Their daughter, a Dartmouth College graduate, is serving with the Peace Corps on the Island Kingdom of Tonga in the South Pacific.

The Wampanoag Tribe of Gay Head has been a federally recognized tribe since 1987, and the tribal council works to ensure the preservation of Wampanoag history, and promote self-determination, among other missions.

“We’ve been serving together for over a decade, which is a pretty special thing in itself,” said Carney, who is also a member of the tribal council. “It can be challenging working with family, but we respect one another’s decisions, knowing it’s all for the tribe.”

Andrews-Maltais, who at 14 was already working at the Wampanoag Homestead of Plymouth Plantations, took on positions such as personnel director and the historic preservation officer for the tribe before eventually being nominated as chairwomen for two consecutive terms starting in 2008.

“She was always eager to learn and accompany me to meetings when she was younger,” Andrews said. “They were all eager, and that’s why they are all involved today. I am very proud of my children and our ancestors would be proud of them.”

Before returning to her third term as chairwoman in 2017, Andrews-Maltais completed a presidential appointment for the Obama administration as a Senior Advisor to the Assistant Secretary on Indian Affairs. “It was a very high honor, and it gave me an interesting position to give guidance on policy and legislation from a tribal perspective,” Andrews-Maltais said.

During the appointment, she gave input and perspective to a variety of projects and issues such as federal recognition for tribes, the Indian Child Welfare Act regulations, Indian women’s rights, and even testified before the US House of Representatives and US Senate on legislation that would affect Indian Country.

Now home in Martha’s Vineyard, Andrews-Maltais continues to ensure her people are given a seat at the table, and is focusing on projects she is passionate about. She explained she would like to see the development of an independent living facility for their elders, as well the development of reasonably cost homes for those wishing to return to the island.

She is passionate about is telling a more accurate narrative of Indian history in America. “To be able to tell our truth through our lenses is imperative,” she said, referencing the horrors American Indians have faced through the centuries. “We endure. We look beyond the centuries of misrepresentation, and just ask for consideration and respect.”

Growing up, Andrews-Maltais explained that at times being one of the only Indian families in the area felt like living in a fishbowl. “In everything we did, we represented ourselves, our tribe, and all of Indian Country,” she said, explaining how pop culture never helped with its crude and inaccurate depictions of American Indians in movies like Peter Pan or The Lone Ranger. “To maintain our cultural heritages is a huge balancing act, but we’ve been doing it for centuries,” she said.

“If I am going to be critical, I have to put my money where my mouth is,” Andrews-Maltais said when asked how she sees herself as a leader, explaining that if she is going to cast stones, she has to be ready to roll up her sleeves and get to work. “We have a long way to go, be it educational reform or economic development, but we have a lot to share, and have a lot to bring to the table.”