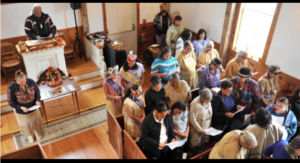 Mashpee Wampanoag Tribe members recite a unison prayer in November during their annual Native American Day of Thanks Giving service at the Old Indian Meetinghouse.

MASHPEE — The Mashpee Wampanoag Tribe could be just days away from learning the fate of land the federal government took into trust on its behalf and a casino it wants to build on some of that property.

The U.S Department of Interior is set to decide whether the tribe’s sovereign land, consisting of 170 acres in Mashpee and 151 acres in East Taunton, can remain in trust after a U.S District Court judge in 2016 adhered to a 2009 Supreme Court ruling in finding that the tribe failed to satisfy the legal definition of “Indian” under the Indian Reorganization Act. That act, established in 1934, sought to increase Indian self-governance, and strengthen tribal culture and tradition.

The tribe gained federal recognition in 2007, roughly 32 years after it first petitioned for the status. But the tribe traces its ancestral roots in the region back 12,000 years.

The tribe is seeking to build a gambling facility — the First Light Casino and Resort — in Taunton, but neighbors of the proposed $600 million facility filed a lawsuit in 2016 challenging how the federal government took the Mashpee and Taunton land into trust. Ultimately, the Interior Department fell in line with the Supreme Court ruling, known as the Carcieri decision, which required that tribes seeking land into trust must have been under federal jurisdiction in 1934 at the time the Indian Reorganization Act was signed into law.

Besides examining what exactly “under federal jurisdiction” means with respect to the law, the Interior Department is considering whether the state of Massachusetts had exercised authority over the Mashpee Wampanoag Tribe and whether that authority could stand in for the federal jurisdiction requirement under the Indian Reorganization Act.

A lawyer representing the East Taunton plaintiffs in their 2016 lawsuit says a decision should come sometime this month.

“It should be any day now,” said attorney David Tennant. “We’ve been hearing they’re targeting mid-February.”

Despite those expectations, Mashpee Wampanoag Tribal Council Chairman Cedric Cromwell said in a statement that there is no statutory requirement that the Interior Department issue a decision on a specific date.

Nedra Darling, a spokeswoman for the federal Bureau of Indian Affairs, did not respond to multiple requests for comment on the decision.

In a letter to Cromwell dated June 30, 2017, Interior Associate Deputy Secretary James Cason cited another legal case that established a trust relationship between a non-federally recognized tribe and the federal government as reason to further explore the Mashpee Wampanoag Tribe’s relationship with the state.

John “Jim” Peters, executive director of the state’s Commission on Indian Affairs, said there are many historical examples predating the Indian Reorganization Act in which Massachusetts exercised authority over the tribe.

“There were a number of times the state stepped in to help us become a viable town,” Peters, who is also a tribe member, said about Mashpee.

Before Mashpee was incorporated in 1870, Peters said the tribe controlled about 50 square miles of land across Cape Cod.

“Much of that land was taken from us because we couldn’t afford to pay taxes, and certain parcels were negotiated away from the tribe,” he said.

Looking forward to an eventual decision, Cromwell said, “anything other than a positive finding for the Tribe that made the Pilgrims survival possible and who helped establish the foundation of America would be a moral stain on this great country.”

“The federal government has already acknowledged the Mashpee Wampanoag Tribe as a sovereign tribal nation with an established reservation land base,” Cromwell said. “We’ve been on our ancestral lands for 12,000 years and we are not going away.”