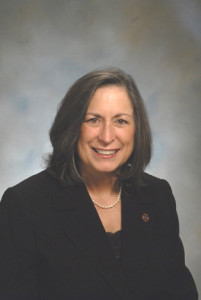 “We are so honored and pleased to have a treasured and well esteemed leader like Chief Malerba join us as an officer of USET.  She is highly educated, well accomplished, and energetic as a Tribal leader.  I think one of her greatest attributes is her passion to advance our Tribal Nations and promote their sovereignty, not just her own Tribe, but all of Indian Country,” President Patterson stated after the selection for USET Secretary was made by the (USET) Board of Directors.

Chief Mutáwi Mutáhash (Many Hearts) Marilynn “Lynn” Malerba became the 18th Chief of the Mohegan Tribe on August 15, 2010, and is the first female Chief in the tribe’s modern history.  The position is a lifetime appointment made by the Tribe’s Council of Elders.  Lynn follows in footsteps of many strong female role models in the Mohegan Tribe, including her mother, Loretta Roberge, who holds the position of Tribal Nonner (elder female of respect) as well as her great-grandfather Chief Matagha (Burrill Fielding).   Prior to becoming Chief, she served as Chairwoman of the Tribal Council, and also worked in Tribal Government as Executive Director of Health and Human Services.  Preceding her work for the Mohegan Tribe, Lynn had a lengthy career as a registered nurse ultimately as the Director of Cardiology and Pulmonary Services at Lawrence & Memorial Hospital.   She holds a Master’s Degree in Public Administration from the University of Connecticut, an honorary doctorate from the University of St. Joseph in Hartford and earned a doctor of nursing practice at Yale University; named a Jonas Scholar.

She is Chairwoman of the Tribal Self-Governance Advisory Committee of the federal Indian Health Service (IHS), one of fourteen Tribal leaders serving on the Justice Department’s Tribal Nations Leadership Council, a member of the Tribal Advisory Committee for the National Institute of Health, and a technical expert on the Commission for Environmental Cooperation.  She is also a member of the Board of Directors for the Center for National Policy and the Ms. Foundation for Women.

Locally she serves as a Trustee for Chelsea Groton Bank, Board of Trustees for the University of St. Joseph in West Hartford, Advisory Committee Member for the Harvard University Native American Program and served on the Board of Directors for Lawrence & Memorial Hospital for 11 years.

She published “The Effects of Sequestration on Indian Health Funding” in the Hastings Center Report, Nov-Dec. 2013 and authored two chapters in “American Indian Health and Nursing” Ed. Margaret P. Moss, Springer Publishing Company to be released in December 2015.

She lives in Uncasville with her husband Paul. They are the parents of two adult daughters, Elizabeth and Angela.