WASHINGTON — Senator Elizabeth Warren has released a DNA test that provides “strong evidence’’ she had a Native American in her family tree dating back 6 to 10 generations, an unprecedented move by one of the top possible contenders for the 2020 Democratic nomination for president.

Warren, whose claims to Native American blood have been mocked by President Trump and other Republicans, provided the test results to the Globe on Sunday in an effort to defuse questions about her ancestry that have persisted for years. She planned an elaborate rollout Monday of the results as she aimed for widespread attention.

The analysis of Warren’s DNA was done by Carlos D. Bustamante, a Stanford University professor and expert in the field who won a 2010 MacArthur fellowship, also known as a genius grant, for his work on tracking population migration via DNA analysis.

He concluded that “the vast majority” of Warren’s ancestry is European, but he added that “the results strongly support the existence of an unadmixed Native American ancestor.”

Bustamante calculated that Warren’s pure Native American ancestor appears in her family tree “in the range of 6-10 generations ago.” That timing fits Warren’s family lore, passed down during her Oklahoma upbringing, that her great-great-great-grandmother, O.C. Sarah Smith, was at least partially Native American. 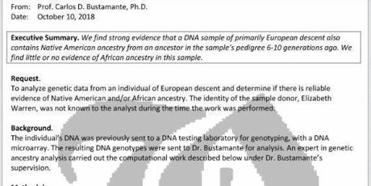 Senator Elizabeth Warren has released a DNA test that provides “strong evidence’’ she had a Native American in her family tree dating back 6 to 10 generations.

Smith was born in the late 1700s. She identified as white in historical documents, though at the time Indians faced discrimination, and Smith would have had strong incentives to call herself white if possible.

The inherent imprecision of the six-page DNA analysis could provide fodder for Warren’s critics. If O.C. Sarah Smith were fully Native American, that would make Warren up to 1/32nd native. But the generational range based on the ancestor that the report identified suggests she’s between 1/64th and 1/1,024th Native American. The report notes there could be missed ancestors.

Undergoing the test and releasing the results reveal how seriously Warren is taking the attacks from Trump, who has been able to effectively caricature and diminish his national foes via nicknames and conspiracy theories. Trump pushed then President Barack Obama into releasing the long form of his birth certificate to prove what most knew was already true: He was born in America.

The move is also another indication of how seriously Warren is considering running for president. And while it’s unclear whether the test will convince Trump and his die-hard supporters, Warren will be able to point to it with other, more open-minded voters. Once Obama produced his birth certificate in 2011, the racist “birther’’ movement, which thrived on the Internet and was stoked by Trump, largely evaporated.

Warren is seeking reelection in Massachusetts and is expected to easily win a second term. She has said that she will take a “hard look” at running for the Democratic nomination for president once the midterm elections are over. She’s already released 10 years worth of her tax returns and made her personnel files available to The Boston Globe, showing that ethnicity was not a factor in her rise in law.

By taking a DNA test, Warren is showing that if she runs for president, she plans to be a very different candidate than Hillary Clinton was. The 2016 Democratic nominee for president chafed at releasing personal information and was dogged throughout her campaign by her use of a private server while she was secretary of state.

Warren provided a sample of her DNA to a private lab in Georgia in August, according to one of the senator’s aides. The data from that test was sent to Bustamante and his team for analysis. Warren received the report last week.

Warren didn’t use a commercial service, but Bustamante is on the scientific advisory board for Ancestry, which provides commercial DNA tests. He’s also consulted on a project for 23andMe, another major DNA testing company.

Warren said she was committed to releasing the report regardless of the results. However, Warren’s aides would not say whether she or any of her three siblings had previously done a commercial DNA test that would have provided them with some assurance about Bustamante’s analysis.

“It really stood out,” said Bustamante in an interview. “We found five segments, and that long segment was pretty significant. It tells us about one ancestor, and we can’t rule out more ancestors.”

He added: “We are confident it is not an error.”

Detecting DNA for Native Americans is particularly tricky because there is an absence of Native American DNA available for comparison. This is in part because Native American leaders have asked tribal members not to participate in genetic databases.

“The tribes have felt they have been exploited,” explained Lawrence Brody, a senior investigator with the Medical Genomics and Metabolic Genetics Branch at the National Institutes of Health. “The amount of genetic data that is available from Native Americans is sparse.”

To make up for the dearth of Native American DNA, Bustamante used samples from Mexico, Peru, and Colombia to stand in for Native American. That’s because scientists believe that the groups Americans refer to as Native American came to this land via the Bering Strait about 12,000 years ago and settled in what’s now America but also migrated further south. His report explained that the use of reference populations whose genetic material has been fully sequenced was designed “for maximal accuracy.”

Bustamante said he can tease out the markers that these South Americans would have in common with Native Americans on the North American continent.

Bustamante also compared Warren’s DNA to white populations in Utah and Great Britain to determine if the amounts of Native American markers in Warren’s sample were significant or just background noise.

Warren has come under blistering attacks from Trump for making claims of Native American heritage. His taunts of her as “Pocahontas” have become part of his standard rally monologue.

Earlier this month at rally in Iowa, Trump said he hoped Warren would run for president because it would allow him to find out “whether or not she has Indian blood.”

In July, during a rally in Montana, Trump imagined debating Warren during the 2020 presidential election and said that he’d try to make her take a DNA test by throwing it at her onstage. “We have to do it gently, because we’re in the #MeToo generation, so we have to be very gentle,” Trump said.

He also offered to provide $1 million to her charity of choice if she takes the test.

Warren’s Senate campaign has used clips from Trump and his spokeswoman Sarah Sanders attacking her for making the Native American claims in a slickly produced video it planned to distribute Monday morning. It includes a scene of Warren and her three older brothers discussing the issue.

There’s even footage of Warren calling Bustamante to get the results of her DNA test.

“The president likes to call my mom a liar. What do the facts say?” asks Warren, sitting at a desk by behind a Macintosh laptop.

“The facts suggest that you absolutely have Native American ancestry in your pedigree,” replies Bustamante, who was also captured on film by Warren’s team.

Bustamante is considered one of the leading DNA analysts in the world. When several DNA experts were asked by the Globe, earlier this year, how they’d recommend Warren go about taking a DNA test, his name came up repeatedly.

He has never donated to Warren’s campaigns. (A different California professor with the same name donated $200 to Obama in 2008, federal records show.)

Questions over Warren’s ethnicity have dogged her since her 2012 Senate campaign. That’s when GOP operatives found archival stories in the Harvard Crimson of a Harvard Law School spokesman referring to her as a Native American as a way to show the school had a diverse faculty.

In an interview with the Globe published last month, Warren explained that she identified herself as Native American in the late 1980s and early 1990s as many of the matriarchs of her family were dying and she began to feel that her family stories and history were becoming lost.

Ivy League universities, like the ones where Warren taught, were under great pressure to show they had diverse staffs.

The University of Pennsylvania filled out a document explaining why it hired a white woman over minority candidates — clear evidence it didn’t view her as a Native American addition. And the Globe interviewed 31 Harvard Law School faculty members who voted on her appointment there, and all said her heritage was not a factor.

Correction: Due to a math error, a story about Elizabeth Warren misstated the ancestry percentage of a potential 6th to 10th generation relative. The generational range based on the ancestor that the report identified suggests she’s between 1/64th and 1/1,024th Native American.