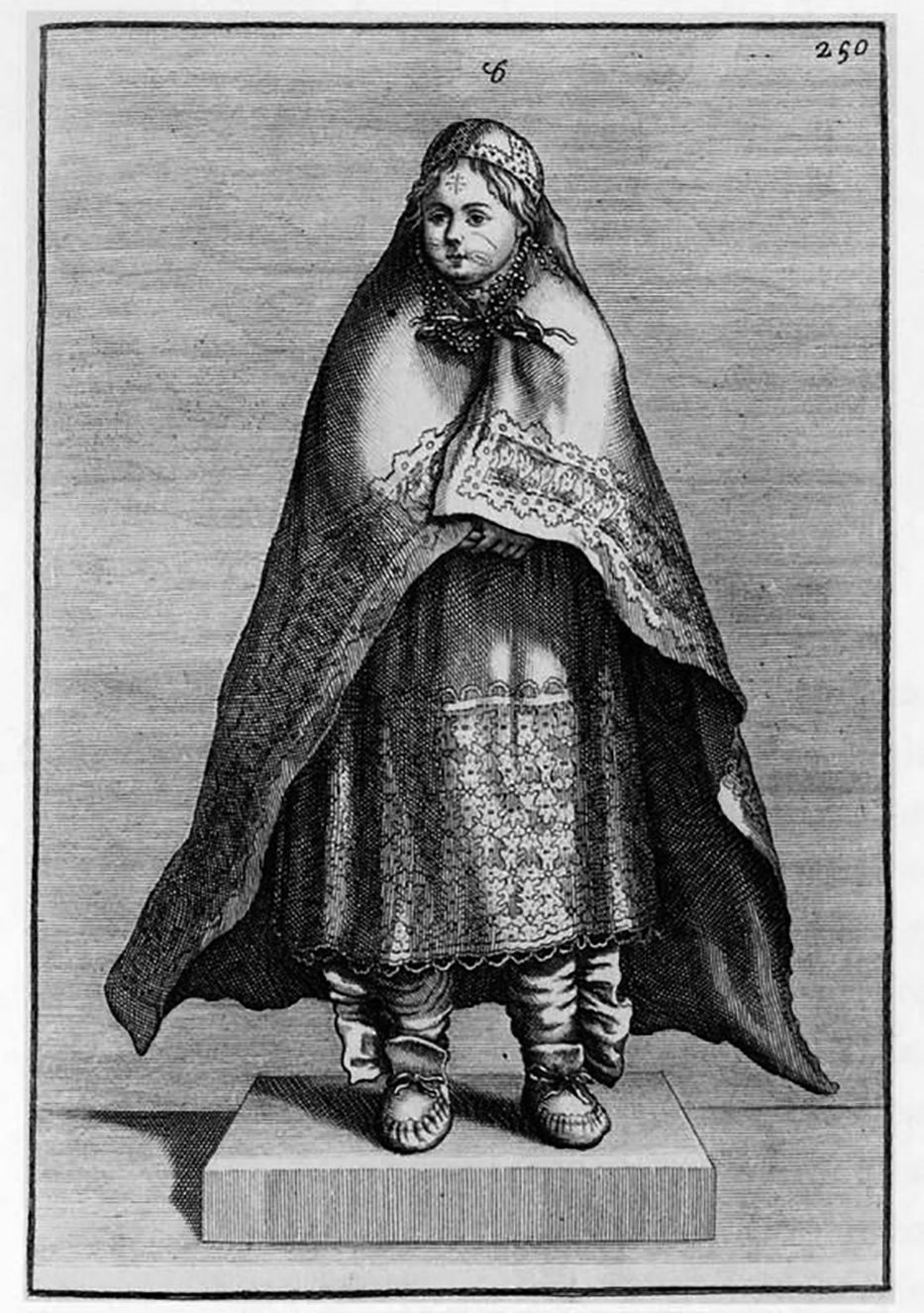 An engraving of a young Abenaki girl from c.1700 wearing very similar moccasins to those below. A copy of this engraving can also be seen in the exhibit at the Horatio Colony Museum in Keene. The moccasins are on loan from the Woodman Museum in Dover. They were made c. 1750 by women from the Ossipee Tribe. They are moose hide and decorated with porcupine quills. 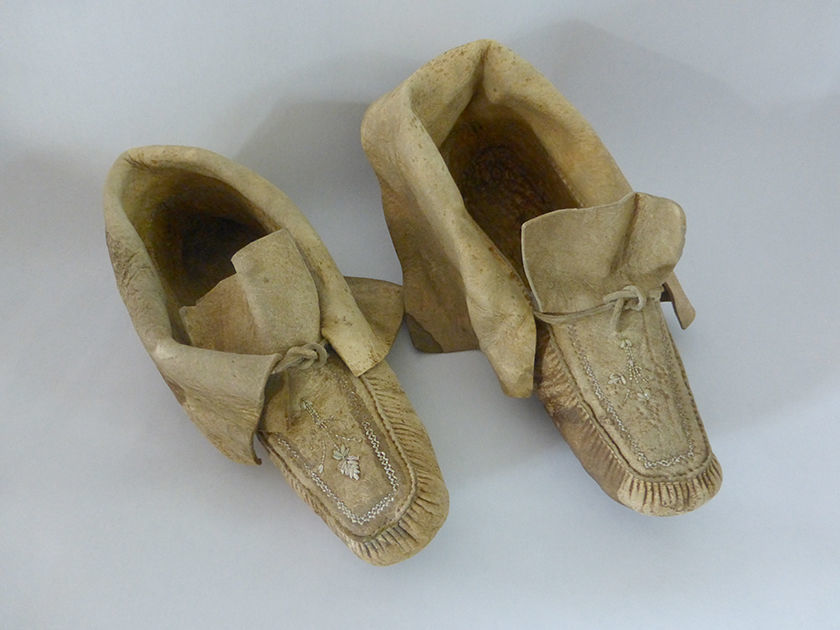 The moccasins are on loan from the Woodman Museum in Dover, N.H. They were made c. 1750 by women from the Ossipee Tribe. They are moose hide and decorated with porcupine.quills

In the 1630s, Connecticut colonists allied themselves with two New England tribes, the Mohegans and the Narragansetts, against a third, the Pequot. At one point during the so-called Pequot War, the English attacked a Pequot encampment.

The colonists’ native allies joined in the attack. But when the English set fire to the village, burning alive hundreds of Pequot, they balked.

“The Narragansetts, who were fighting alongside the English, started shouting ‘Enough, enough,’ ” author Michael Tougias said at the Cheshire County Hall in Keene Wednesday. “They’d never seen warfare like that.”

Tougias — a co-author of “King Philip’s War: The History and Legacy of America’s Forgotten Conflict,” who has also written a historical novel set during that war — was speaking at a talk organized by the Horatio Colony Museum. The museum has an exhibit, which runs through Aug. 26, on early clashes between Native Americans and colonists in New England.

Before long, the Narragansetts were on the other side of the English torches. In 1675, a conflict known as King Philip’s War broke out between English settlers and some southern New England tribes, Tougias said. The Narragansetts stayed neutral at first. But that December, Colonial forces attacked and burned a Narragansett settlement in what’s now southeastern Rhode Island. The assault killed hundreds of Narragansett, including civilians.

“In kind of a haunting way, the Narragansetts in King Philip’s War … suffered the same fate as they inflicted on the Pequots,” Tougias said.

King Philip’s War takes its name from Metacom, also known as Philip, a leader of the Wampanoag people of southeastern Massachusetts. It began in June 1675, after the Plymouth Colony executed three of Philip’s men on flimsy murder charges. For the next 14 months, Philip and his allies led destructive, deadly attacks on English towns in Massachusetts, Rhode Island and coastal Maine. Troops from Massachusetts Bay, Plymouth and Connecticut colonies did the same to Algonquian settlements.

The Wampanoag and Narragansett were among the several indigenous peoples in southern New England at the time, all part of the widespread Algonquian group of tribes.

While no battles were fought in the Monadnock Region — the closest was in what’s now Northfield, Mass. — more activity happened there than conventional histories of the war acknowledge, said Rich Holschuh of Brattleboro, a member of the Vermont Commission on Native American Affairs.

Supplies from Canada came down the Connecticut River, and natives from southeast New England took refuge “by the thousands” in what is now Hinsdale and Vernon, Vt., he said. “This was still a very strong Abenaki homeland,” Holschuh said, referring to another Algonquian people, “and they had shelter and they were welcomed there.”

In addition, Mary Rowlandson, an English captive who would later write a popular memoir of her ordeal, was taken to modern-day Chesterfield.

Lurking behind the immediate causes of the war were ongoing tensions over land. The English imposed a foreign concept of land ownership on New England, which clashed with Algonquian understandings of the landscape.

Algonquian peoples moved seasonally, taking advantage of different food sources. Rather than staying in a fixed location, their movement through the country “establish(ed) a permanence with the landscape that the English were unable to comprehend,” Tougias and his co-author, Eric B. Schultz, write in “King Philip’s War.”

To the English, one had to “improve” land — i.e., permanently settle and cultivate it — to claim it, the historian Jill Lepore writes in her book, “The Name of War.” The English didn’t see inhabited country, but unclaimed territory.

Once the fighting began, many in Colonial New England perceived an existential threat. “For a time in the spring of 1676, it appeared to the colonists that the entire English population of Massachusetts and Rhode Island might be driven back to a handful of fortified seacoast cities,” Tougias and Schultz write.

The Wampanoags and other Algonquians suffered greater losses. Colonists and their native allies “pursued every Indian, from Narragansett Bay to the Connecticut River Valley, killing warriors in the field and families in their homes,” Lepore writes.

On paper, the war ended soon after Philip’s death in August 1676. But the underlying tensions remained.

“In a way, that war just morphed into the French and Indian wars” of the next century, Tougias said Wednesday, “because many of these natives who were fighting alongside Metacom fled North, and now they have a European ally, in the French, to resume the fight against the English and try to get them out of their homeland.”

King Philip’s War is sometimes portrayed as a climactic conflict that swept native peoples from the region.

“In essence, the war cleared southern New England’s native population from the land, and with it a way of life that had evolved over a millennium,” Tougias and Schultz write.

As devastating as the war was, many Wampanoags, Narragansetts and Nipmucs survived it and went on to live among the English or in “small native enclaves,” according to Lepore. Native Americans in eastern Massachusetts kept elements of their own cultures alive, even as they adopted European ideas about property and other imported customs, she writes.

But they had certainly entered a “different world,” one in which English dominance spread and many Algonquians fled, hid out or were kept as slaves, according to Lepore.

Faced with persecution, New England natives often assimilated into European society, said Holschuh, who traces some of his ancestry to the Mi’kmaq of eastern Canada. Abenakis worked on whaling ships and in Vermont logging camps, sometimes passing for French Canadian, he said.

They “did not, and to some degree may still, not make themselves highly visible,” he said. “So (native) people are still in the communities, but you may not recognize them for who they are.”

For Holschuh, that recognition is important.

“There’s this attitude that … ‘The natives rose up, they were put back down, they were put in their place, they’ve all gone away and it’s ancient history,’ ” he said. “And New England has still refused to deal with that, basically.”

Larry Spotted Crow Mann, a writer, educator and member of the Nipmuc, said King Philip’s War “had a crippling effect on our community throughout central Massachusetts” that lingers to this day.

With the Nipmuc fearful and “demoralized,” it was easier for the English to take their lands, Mann said. The community was fractured and marginalized; he has ancestors who scratched out a living selling baskets and bows and arrows to tourists.

“Before and during that war, the Indian people of the Northeast still believed that they had a chance to remain how they were,” he said. “And that’s what the fight was about, holding on to your land, your traditions, your culture.”