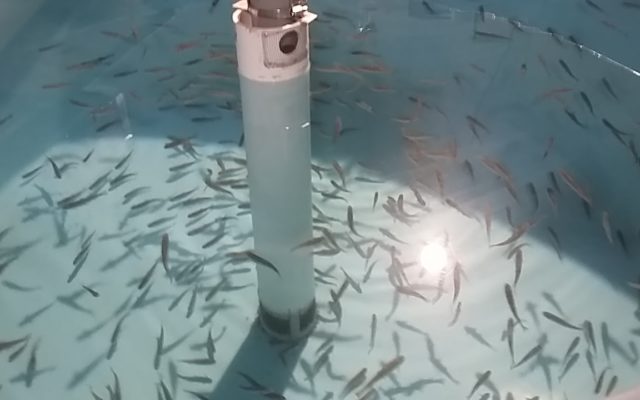 Young brook trout swim at the Micmac Farms trout hatchery on Route 1 in Caribou in September 2016. In a tank system installed in 2011, the farm is raising thousands of trout to supply fisheries for stocking as well as to sell fresh locally. (Anthony Brino | Star-Herald file)

CARIBOU, Maine –The Micmac Fish Farm is offering a new service to northern Maine landowners. This spring, Micmac Farms is licensed to stock trout in private ponds and waters.

According to marketing manager Jacob Pelkey, the farm is restoring a service that Mountain Springs Trout Farm of Frenchville previously fulfilled before their closure in 2015.

Dave Macek, farm manager for Micmac Farms, announced April 18 via a press release: “People have shown a great interest in pond stocking, and we are raising healthy, vigorous fish that people recognize as being a high quality. They want to raise them.”

This spring, Micmac Farms of Caribou anticipates selling 15,000 native Maine brook trout for the purpose of stocking ponds. The majority of these fish will be 6- to 8-inch fish (fingerlings) sold from the hatchery location and at Soil and Water Conservation District Trout Sales in Presque Isle, Houlton and Bangor.

Micmac Farms operates a 34,000-gallon recirculating fish farm on the town line between Presque Isle and Caribou. Pelkey said this type of facility is known as “land-based aquaculture” and is a new method of raising fish that is growing in popularity because of its sustainability and efficiency.

The facility, he explained, pumps 3,000 gallons of groundwater in every day, and filters out the same amount. The water leaving the hatchery collects into a septic system located below ground behind the hatchery building. The fish waste collected is then used as a rich fertilizer for the Micmac Farms’ produce fields.

Pelkey said Maine is “the last true stronghold of native brook trout in the United States,” and the trout project is a conservation effort with the U.S. Fish and Wildlife Service that aims to protect and restore the state’s native brook trout population.

In addition, he said, Micmac Farms encourages catch-and-release fishing practices that keep native fish in the wild while providing a best-choice seafood option to northern Maine.

Micmac Farms began in 2005 as a community garden for the Aroostook Band of Micmacs, committed to chemical-free agriculture. The facility annually cultivates more than 4 acres of land for produce like tomatoes, peppers and beans, and each year raises more than 12,000 pounds of brook trout, over 1,200 pounds of tomatoes and preserves 12 varieties of canned goods.