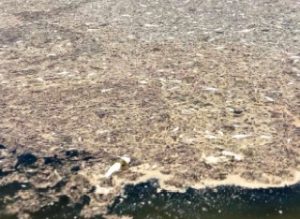 UPDATE: Gov. Rick Scott has now issued an emergency order to allow water from Lake Okeechobee to be discharged to the south, into the Everglades, instead of directing runoff primarily east and west.  The governor’s order calls for the suspension of rules and modification of permits to allow water to move swiftly from the lake through the Everglades regions of Palm Beach, Broward and Miami-Dade counties.

Local fishing guides have been coming back from the water in the last two days with pictures and video that most describe with two words – a nightmare. Out on the sandbar near the trestle, in the Harbor and in Gasparilla Sound there is death everywhere you look. Thousands of dead fish, from snook to grouper to tarpon, are mixed in with large floating mounds of viscous decomposing matter. The smell on press day (Thursday, June 21) going over the Boca Grande Causeway was incredibly overwhelming, as gas from decomposition mixes with salt water, seagrass and other questionable substances. The water around these masses is black and almost gooey-looking.

Welcome to one of the worst red tide blooms we’ve seen in a very long time.

Capt. Chris O’Neill was one of the guides on the water on Thursday, and what he saw frustrated him to no end. His photos and video coverage on Facebook prompted local news crews to come to the island that same day.

“There were grouper, redfish, 40-inch snook … all dead,” he said. “As far as you could see, it was one big wall of death. This is not normal, not at all, and if someone doesn’t figure this out soon we won’t have to worry about tourism dollars from the beaches and fishing. There won’t be any. I’m not as worried about someone losing a $500 dollar charter over bad publicity as I am making people aware that we need to figure this out quickly, we need to find out what is causing this – I’m interested in the long-term solution. If we can put a man on the moon, we can come together and figure out how to stop this.”

Ask 10 well-informed Floridians what they think of red tide and blue-green algae, and you will more than likely get the same answer – the number of blooms seems to have increased, and they stay around longer than ever before. However, when you ask those same 10 people why they think the blooms are here, you might very well get 10 different answers. While it is naturally occurring, few will dispute that both the severity and longevity of the blooms have become more serious in the last few decades.

Our current red tide bloom is a nasty, annoying problem that creates fish kills and breathing problems for many people. At the beginning of this month, the red tide bloom that has been sitting off our coast since November – traveling between Sanibel and Tampa, it seems – was mixed with a very large freshwater release from Lake Okeechobee that came down the Caloosahatchee River. Scientists from many fields of research have concluded that red tide blooms are enhanced by nutrient-rich fresh water mixing with salty Gulf water, creating a perfect environment for red tide to come to our beaches and stay awhile.

But wait, there’s more. We have “blue-green algae” as well, a cyanobacterium that also feeds on nutrient pollution from farming and urban runoff and thrives on stagnant water. Last year, a NASA satellite showed an algae bloom 239 miles long in the Everglades. In January of this year a very prominent scientist named Dr. Paul Cox visited Boca Grande and gave a very informative presentation regarding his theory that people exposed to cyanobacteria suffer higher rates of Lou Gehrig’s disease and Alzheimer’s.

While red tide and blue-green algae have been around since the history of man, there is no question that they have become a serious threat to everyone in the state of Florida. Whether you’re an asthma sufferer or a business owner, anything that keeps people out of local waters is a huge problem. You may think these are very good reasons to alert scientists that we need a solution sooner rather than later, and you’d be right. However, when you ask that question you walk right back into the same territory we discussed before, in that you’ll get 10 different answers as to why the blooms of algae are here in the first place in such prolific amounts.

There are two undeniable aspects of this problem: Algae blooms in saltwater feed on freshwater runoff laden with manmade and natural nutrients; and drainage from central Florida flooding is not properly directed southward back into the Everglades.

The flow of water runoff is a vital part of this whole problem. Historically the Everglades were fed from freshwater the flowed south from Lake Okeechobee in a slow and steady pattern called sheetflow. When more urban development and agriculture sprung up around central Florida and the lake, the water needed to be artificially tamed and managed to control the flow around those valuable areas.

When the Tamiami Trail was built in the 1920s, it also began to physically block the water flow from north to south. To make matters worse, the water levels around the road are kept at a low level to make sure the roadbed is not damaged. The Northeast Shark River Slough was always the biggest point of entry for southbound water flow into the Everglades, up to 60 percent. Now only 20 percent of the water flowing into the Everglades comes through there.

To add to this mix, many believe that “Big Sugar,” otherwise known as U.S. Sugar Corp. and Florida Crystals, is stopping the water from flowing south as well. Sugar companies utilize approximately 700,000 acres of land in southern Florida, and researchers have proven that they are heavily polluting the water running into the Everglades.

Sugar cane farms frequently fail to meet Everglades pollution cleanup standards, pumping hundreds of thousands of gallons of phosphorus-laden water that runs off from the farmland. However, thanks to forgiveness from the state, the polluted water has continued to flow.

While Big Sugar may not be the only culprit in a mixed bag of reasons why our inland and coastal water is not as clean as it once was, it is one reason why multiple clean water organizations – such as Bullsugar, Captains for Clean Water, Everglades Trust, Bonefish Tarpon & Trust and the Everglades Foundation – start standing up en masse to protest a lack of information regarding red tide and blue-green algae blooms in Florida waters. A new movement called “Now or Neverglades” has sprung forth from the combination,

After years of back-and-forth debate between Florida environmentalists and corporate lawyers (as well as a failed attempt in 2006 to buy land back from U.S. Sugar to build what was called the A1 Reservoir east of Lake Okeechobee), last year a new bill called SB 10 was introduced. It includes the State of Florida converting 14,000 acres of government-owned land that are currently covered by stagnant, shallow water and converting them to deepwater reservoirs. Why was this bill successful where so many others have failed? Public awareness is key. Seeing perpetual red tide blooms and massive blue-green algae blooms has spurred everyone from beachgoers to corporate restaurant owners to pay attention to what is happening to our water.

U.S. Fish and Wildlife freely admits the Everglades is about half the size of what it was historically, and calls it “one of the biggest plumbing systems in the world.” They are referring to the manmade levies and dikes called “water structures,” as well as pump stations that move water into different compartments. The Tamiami Trail acts as a dam, so water cannot flow into the Everglades the way it is meant to. They also admit they are moving water away from the developed areas and manmade canals that run through those areas. They also call it “one of the biggest ecological restorations in the world.”

Betty Osceola, a well-known Native American and outspoken clean water activist who lives in Ochopee in the Everglades, said there needs to be more proactive conversations and resolutions, not to mention action regarding proper drainage of Lake Okeechobee. She believes it is the key, not only to reinstating a more natural environmental chain of events in the Everglades, but to bringing much of Florida’s waterways and Gulf waters back into balance as well. She said a big part of the reason the six manmade canals that run water from central Florida south to the Everglades have been closed so often is because of one small bird, and many agree with her.

“Water releases at a slower rate over a longer period of time, instead of water releases at a greater rate for a shorter period of time. Is this concept too foreign to consider?” she said. “Restoration of an area to replicate what it was historically versus restoration of an area to what mankind thinks that area should now be? The sparrow is one component of the problem, but it is an important component.”

The sparrow she is referring to is the Cape Sable seaside sparrow. It has been designated as endangered under the Endangered Species Act. It lives on the prairies of the Everglades, right around the area where multiple Miccosukee villages exist. This bird requires what is known as “aquatic prairie” land, meaning the land has to have low water levels and open areas to exist. Its very livelihood is dependent on water levels, and with man’s encroachment on the Everglades, natural water levels are hard to maintain.

This particular sparrow’s nickname is the “Goldilocks” bird, because for it to exist, everything must be “just right.” So while the State of Florida is working feverishly to keep the Cape Sable seaside sparrow thriving, many say the rest of the Everglades is suffering.

Michael Frank of the Miccosukee tribe was born in the Everglades in 1957, specifically in a place called “High Island.” He recalled the stories told through the generations, of the special place his ancestors hid when they were being chased into a white man’s world of conformity.

“Our creator told them he had provided a refuge for them,” he said. “The River of Grass, as it is called, is very important not only to the indigenous people, but to the animals who live there as well. The Everglades sparrow is one of them. While they are preserving that bird, though, they are destroying the entirety of the Everglades as well.”

The gates that are closed now through mid-July to protect the sparrow would allow runoff to flow southward, but U.S. Fish and Wildlife Services say it is “incumbent on all federal agencies under the Act to do everything within their authority to maintain these species.” So when rains are heavy and the southbound canals are closed, that makes the water very high north of the Tamiami Trail and south into the national park. For the Everglades, this means that an area that used to be a wetland is drying out and turning into something different altogether, all to protect one bird. For the love of that particular sparrow, more fresh water is released into east/west waterways, which eventually ends up in the Gulf of Mexico on our side of the state and in the Atlantic at Port St. Lucie on the east side of the state.

Michael Frank said his people who have lived on Florida land for generations, as well as the rest of the population of South Florida, are at daily risk. He voiced his own concern for the future existence of his people in the Everglades, but the words resound in the ears of all of us who love natural Florida and hate to see what is happening right now.

“We fight not only for our existence, but for the animals. For the birds, for the trees, for the land,” he said.