Halbritter, who for several years has campaigned for the NFL’s Washington Redskins to drop the name Redskins, called the move by the Cleveland Indians “a very good step.”

Halbritter told Syracuse.com| The Post-Standard in a telephone interview Friday that “it was really something to see professional sports leagues catching up to what younger generations already intuitively understand – that we all strive to be respectful and inclusive.”

He said he had no contact with Cleveland or Major League Baseball officials on the decision, but said others have been fighting for this issue for some time.

“This makes good business sense as well,” he said. “Sports is such a unifying event.”

The Cleveland Indians’ Chief Wahoo mascot, a red-faced caricature of a Native American, is “offensive, and not appropriate or respectful,” Halbritter said. The team announced last Monday it won’t use the mascot on its uniforms starting in 2019.

Changing the Cleveland Indians name would be another positive step, but Halbritter said the focus is on changing “the most blatant examples of negativity” – and that, he said,  would be the Redskins name.

“The name (Redskins) is a derogatory, racist name,” Halbritter said. “It has a horrific genesis, and no amount of polling can change that.”

“If you wouldn’t go around calling Native Americans the “R” word, why would you have this name,” he said.

Origins of the word Redskins 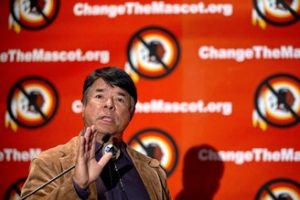 Halbritter suggested the team and NFL look in the mirror and think about how they’ll be remembered in history.

“Do they want to be remembered as the worst purveyors of bigotry in sports – and for what?” he said. “If it’s no big deal, then why don’t they just change the name. It’s the only decent and humane thing to do.”

Halbritter said it matters to the next generation because promoting racial bigotry doesn’t serve anyone’s children.

Halbritter and the Oneida Nation have been on a campaign to pressure the Washington Redskins to change its name for several years. He has met with NFL executives and members of Congress to explain why he believes the word is a racial slur.

The Oneidas have spent tens of thousands of dollars on their Change the Mascot campaign, commissioning studies, hosting a symposium and scheduling radio ads to run in every city Washington’s team visits this season, according to the Washington Post.

Redskins owner Daniel Snyder has repeatedly vowed to never change the name of the team.

Earlier this week, NFL Commissioner Roger Goodell said he does not expect any change to the Redskins’ name in the foreseeable future.

He cited a Washington Post poll that said most Native Americans don’t see a problem with the name, according to an article in The Washington Post. Change the Mascot organizers have questioned the accuracy of the poll.

Halbritter said there’s no gray area for arguing the Redskins name is acceptable.

“Just because it’s popular doesn’t make it right,” he said.