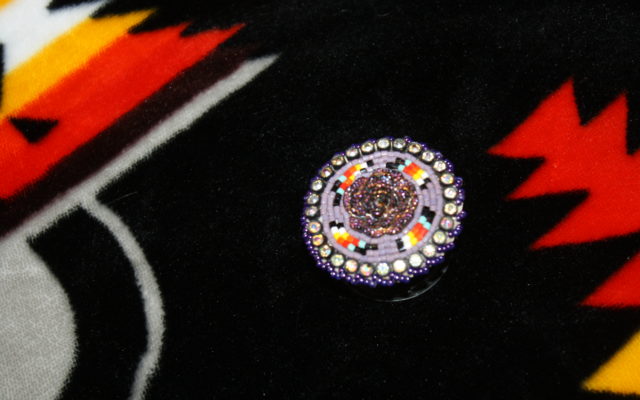 PRESQUE ISLE, Maine — For many generations, beading has been a common practice in Native American artwork for creating earrings, necklaces and beaded accessories for traditional tribe regalia.

On Friday, Waupi Paul, a community member of the Aroostook Band of Micmacs and longtime craftsperson, stopped by Hardscrabble Solutions in Presque Isle to teach folks how to create a unique accessory out of beads: popsocket grips for their cell phones.

A popsocket is a circular disc attached to the back of a cell phone with a flexible, accordion-like stem that pops out and allows the user to hold the phone more easily or prop it up to watch videos.

To begin making a popsocket, crafters need to gather many different colored beads, a needle and thread, a button and a small circular canvas to sew their beads onto. They should then glue their chosen button onto the center of the canvas using jewelry and beading glue that they can purchase from any retail or specialty craft store. Paul said people should wait at least one to two minutes for the glue to dry so that the button does not slip off as they thread their beads.

Once they have chosen their favorite colored beads, crafters need to place the beads onto their needle and begin threading around the button. Paul shared the best way to thread the beads without having any of them slide off the thread during the process.

“I like to create a ‘fisherman’s knot’ by tying a knot at the end of the string so that the string doesn’t completely slide out of the needle,” Paul said. “Then I stretch the thread across my chest and cut it so that I have a string that’s long enough to thread with, but not too long.”

The rest of the steps, Paul said, become more repetitive as crafters weave three beads at a time in and out of the canvas, slowly working their way around the center of the button to create the popsocket. The popsocket should be large enough to fit onto the case of a Smartphone or iPhone and to grip easily.

Paul has been beading since she was 11 years old after learning from older family members. She is originally from the Narrangansett Indian Tribe in Rhode Island and has lived in the Micmac community for over a decade now. She has often held demonstrations on Native American beading, traditional regalia and dancing for both the Micmac community and the general public.

Once people master the basics of flat stitching, Paul said, they could easily move on to more complex forms of beading such as peyote stitching and tubular stitching and create other accessories such as necklaces, earrings or beaded decorations to go with traditional Native American regalia, including belts, dance sticks and feathers. Beading techniques are fun crafts that people of all ages can easily learn and practice and traditions that Paul has been passing down to her children.

“Beading is a very expressive form of art that can show a person’s individuality and creativity,” Paul said.

“I work for Little Feathers Head Start and we always incorporate cultural lessons into the curriculum,” Ellithorpe said, referring to the Head Start program of the Aroostook Band of Micmacs. “This is the first time I’ve learned to bead, and I definitely want to continue. I like the togetherness of beading with other people and how family-friendly the craft is.”

Paul’s beading demonstration is just one part of a Micmac community art showcase going on now at Hardscrabble Solutions. In addition to beadwork, Native American paintings, photography and other crafts are on display at the family-friendly co-working space throughout this month. A demonstration of Micmac basket-weaving techniques will be held at 6 p.m. Friday, Feb. 22.