VERY SORRY: Of the four Trump administration witnesses at a Senate Committee on Indian Affairs hearing on April 10, 2019, three were late with their testimony. Photo by Indianz.Com (CC BY-NC-SA 4.0)

WASHINGTON, D.C. — A routine hearing before the Senate Committee on Indian Affairs on Wednesday turned into an apology tour for the Trump administration as a slate of officials were forced to explain why they turned in their testimony late.Of the four witnesses sent by the Trump team to testify about community development in Indian Country on Wednesday afternoon, three failed to abide by the committee’s rule for submitting their written statements 48 hours in advance. All had varying explanations for their lateness and all said they were really, really sorry.”My apologies to the committee,” Assistant Secretary for Indian Affairs Tara Sweeney said in what was her first appearance on Capitol Hill since being confirmed to her post at the Department of the Interior nearly 10 months ago.”I was late in drafting the entire document and so it was going through the review process,” Sweeney, who is the first Alaska Native woman in the job, said of the seven-page written statement that outlined her priorities regarding energy development, business development and access to capital on

tribal lands.Indianz.Com on SoundCloud: Senate Committee on Indian Affairs – Building out Indian Country: Tools for Community Development – April 10, 2019Jodie Harris, the director of the Community Development Financial Institutions Fund at the Department of the Treasury also was sorry. But she indicated she was only a few hours late in submitting her six pages of testimony.”We were verifying the data late into Monday and we sent it over Monday evening so my apologies for missing the 48-hour window,” Harris told the committee. The document included dollar figures of projects that have been supported by community-based financial institutions in tribal communities.Henry Childs II, the national director of the Minority Business Development Agency at the Department of Commerce was really apologetic too. He was the only one of the three who explained at the beginning of his presentation to the committee why he was late in sending in his eight-page statement.”I apologize for missing the 48-hour rule,” Childs said before talking about his agency’s commitment to economic empowerment and self- determination in Indian Country. “This testimony is very important. The issue will be addressed and it will not happen again.” 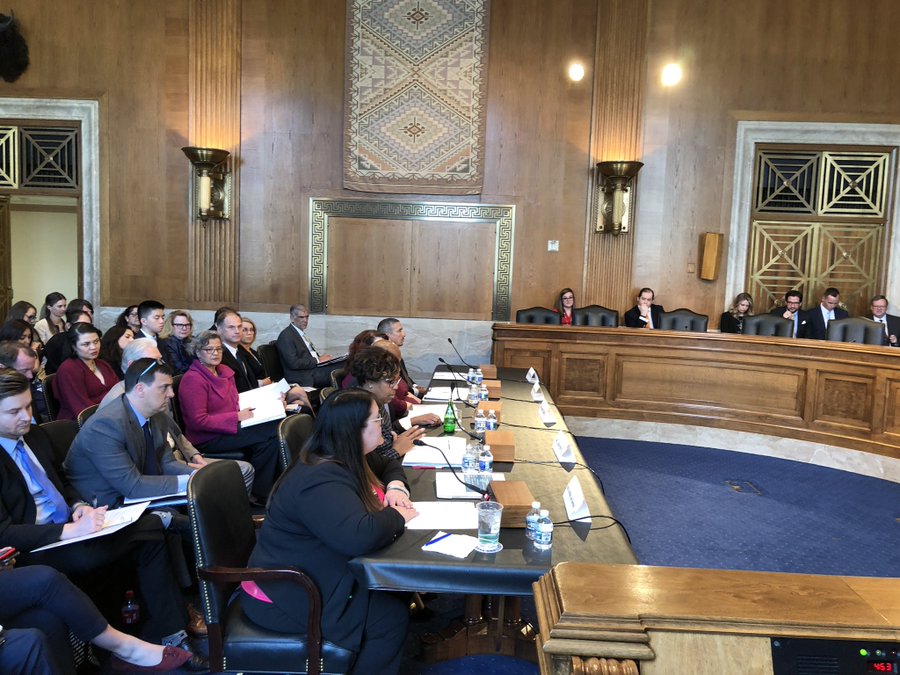 Unfortunately for the Senate Committee on Indian Affairs, members have heard such explanations, apologies and promises before. Just last month, the directors of the Bureau of Indian Affairs and the Bureau of Indian Education were late with their testimony.”We apologize,” BIE Director Tony Dearman said on March 14. He had to be prompted for an explanation regarding his agency’s testimony about being designated as a “high risk'” program, one that is in danger of failing to failing to carry out its trust and treaty responsibilities.The BIE is part of the Department of the Interior and Dearman, like Sweeney, appeared to lay blame at its huge bureaucracy.”We have a lot of moving parts right now,” he said. “We wanted to make sure the information we provided was accurate and we do have a review process with the department.””I’ll definitely take back the concerns with the department and make sure that we meet the deadline for the next hearing,” added Dearman, who is a citizen of the Cherokee Nation.

Department of Treasury was late too: “We were verifying the data late into Monday,” Jodie Harris said, so the Community Development Financial Institutions Fund @CDFIFund broke committee’s rule requiring testimony to be submitted 48 hours in advance of hearing. @IndianCommittee

No one at Interior must have heard the “concerns” or taken them seriously enough since Sweeney’s testimony was late for the “next hearing,” the one on Wednesday.”I apologize too on behalf of the department for our late submission of the written testimony,” BIA Director Darryl LaCounte told the committee on March 14. He said the department was working “right up to the last evening” before the Tuesday afternoon hearing “in order to give the committee the most up-to-date, accurate picture” of why its programs also have earned the “high risk” designation from the Government Accountability Office.But LaCounte, a citizen of the Blackfeet Nation, was far more forthcoming about the inner workings — or lack thereof — at 1849 C Street NW.”There’s are some new folks involved in the process and I’m confident everyone involved will learn from this,” LaCounte said without naming the newer people who don’t seem to have learned over the past month about the late testimony rule. “I’m really confident that when I’m the witness, I’ll speak a little louder when the deadline nears.””But to be honest, I really don’t know why it’s late,” he added, indicating that the process at Interior — whoever controls it — is out of his hands.

Also breaking @IndianCommittee 48-hour rule regarding testimony was the Department of Commerce. “I want to apologize,” said Henry Childs II of the Minority Business Development Agency. @USMBDA “It will not happen again.”

To be honest, the Trump administration hasn’t been the only offender. During the Obama years, committee members expressed frustration when the Department of Justice, in addition to the BIA, failed to submit critical law and order information on time.”Indian Country’s in crisis and what this tells me, right or wrong, is that it’s not a priority for you,” Sen. Jon Tester (D-Montana) said at a December 2015 hearing during which he served as the vice chairman.According to Tester, Indian Affairs has long been treated as an afterthought by the executive branch. “It’s unacceptable and it’s the only committee that this happens,” he said at the time. He was not present at Wednesday’s hearing so the witnesses were spared another admonishment.The history underscores precisely why the committee changed its procedures for the 116th Congress. According to Rule 4(b), a government witness who fails to submit their testimony 48 hours in advance must explain, in person and on the record, “why their testimony was late,” Sen. Tom Udall (D-New Mexico), who is the current vice chairman, said at the March 14 hearing.
The rule change, which was adopted at the beginning of the session in January, doesn’t seem to have made the rounds fully in Washington, D.C., or at least enough to make the Trump administration pay more attention to the committee. Even when Sen. John Hoeven (R-North Dakota), the chairman of the panel, reminded the witnesses on Wednesday to explain why their testimony was late, he had to promptAssistant Secretary Sweeney to do so.”It’s supposed to be in 48 hours prior,” Hoeven said before asking them to explain why they were late “as part of your introductory remarks.”Sweeney didn’t seem to have heard that part. Just five minutes later, Hoeven told her: “I do have to ask why you didn’t get your testimony in within the 48 hours.”Harris, of the Community Development Financial Institutions Fund, did not have to prompted by Hoeven. But she waited until the end of her statement to provide her on-the-record explanation, leaving Childs as the only one of the three witnesses who addressed the issue right away.

Wow. Sounds like a complete lack of respect on their part.

“Wow. Sounds like a complete lack of respect on their part,” one observer wrote on social media of the Trump administration’s apology tour.The fourth administration witness was Jacqueline Ponti-Lazaruk, who serves as the Chief Innovation Officer for Rural Development at the Department of Agriculture. Her agency was the only one who complied with the committee’s rule.The Senate Committee on Indian Affairs has not yet posted notice of its next hearing. 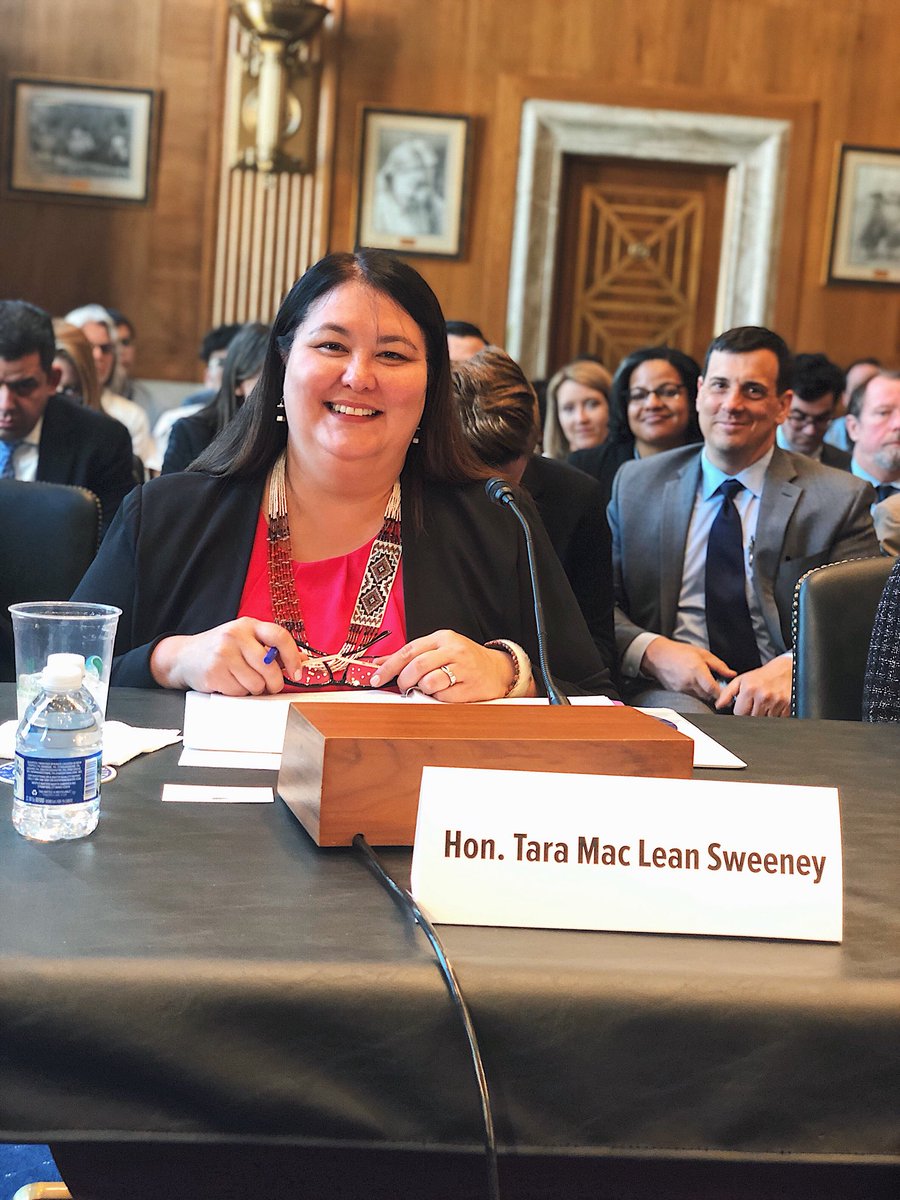 .@IndianCommittee, thank you for having me to discuss community development in Indian Country today. More info here: http://indian.senate.gov