After delaying action for more than two months, the U.S. Supreme Court has finally delivered victory to the Oneida Nation in a long-running land case.

But the denial of the petition in Upstate Citizens for Equality v. U.S. on Monday isn’t coming without some drama. In a rare dissent, Justice Clarence Thomas blasted his colleagues for turning down a chance to consider the legality of the land-into-trust process.

And if given the opportunity, Thomas is letting Indian Country know how he would rule. The land-into-trust process is illegal because it allows the Secretary of the Interior to take land out of state control without the state’s consent, he argued

“Asserting plenary power, Congress authorized the Secretary to take 13,000 acres of New York and to declare it sovereign Oneida territory,” Thomas wrote in the four-page dissent. “It did so even though the land had been under New York’s sovereign control for more than two centuries.”

So just what does Thomas cite as the basis for his beliefs? His own writings, of course. In a handful of recent cases, he has repeatedly undermined the federal-tribal relationship and has questioned whether Congress has the power to enact laws such as the Indian Reorganization Act.

“Understood this way, the Indian Commerce Clause does not appear to give Congress the power to authorize the taking of land into trust under the IRA,” Thomas wrote in his dissent, making clear that “this way” is based on his own views, which he himself admitted go against the Supreme Court’s own precedents.

“Even assuming that land transactions are ‘Commerce’ within the scope of the Clause, many applications of the IRA do not involve trade of any kind,” he added.

“In short, because no exchange takes place, these trust arrangements do not resemble “‘trade with Indians,’” Thomas also stated as he characterized the land-into-trust process as a transaction in which no trade or commerce occurs. 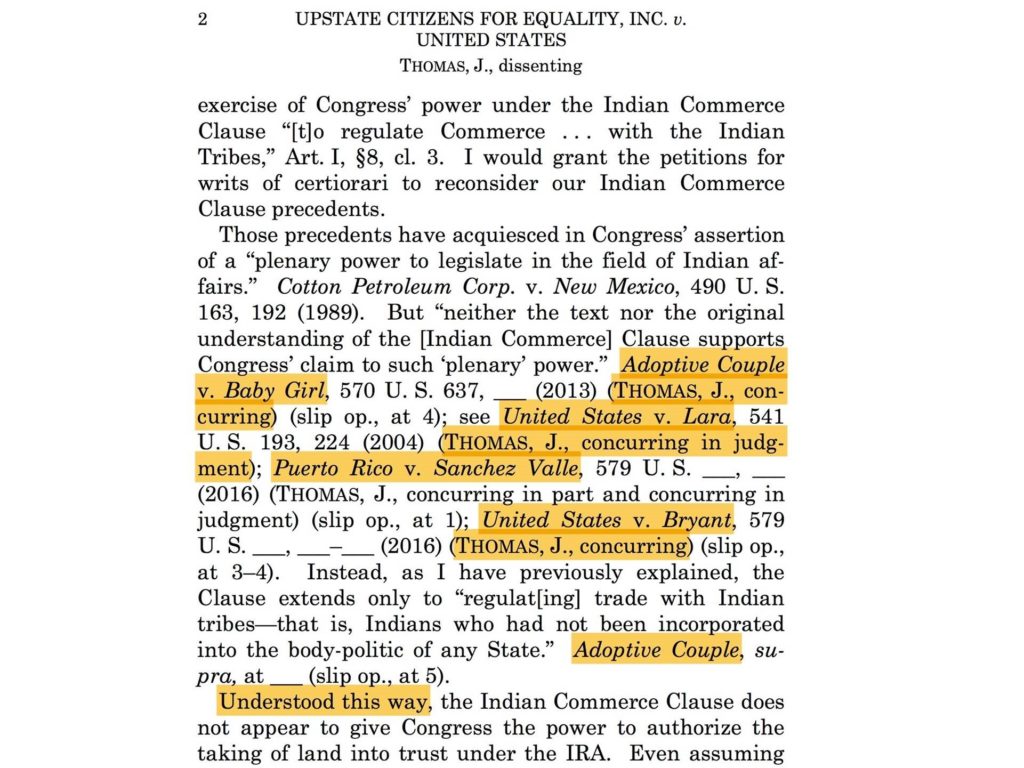 In a November 27, 2017, dissent, Justice Clarence Thomas cited his own writings in four recent cases as the basis for his belief that the U.S. Supreme Court should re-examine its Indian law precedents.
The emergence of the dissent helps explain why the Supreme Court took so long to dispose of the petition. It was originally listed for consideration for a closed-door conference on September 25 but the justices kept delaying action — six times since then, according to Docket No. 16-1320.

It takes a vote of four justices to agree to hear a case. So Thomas only needed to convince three of his colleagues to consider granting a petition filed by anti-Indian group called the Upstate Citizens for Equality and non-Indians.

Yet no one else joined his dissent despite the lengthy delay between the original conference, which had been scheduled in July, during the Supreme Court’s summer break, and the issuance of the order list on Monday.

The Supreme Court does not release the results of any votes taken during its conferences and most petitions are denied without an explanation, except in rare instances where a justice decides to explain his or her views.

“Due to the number of reschedules in the Supreme Court we believe we had the supprt of 3 justices (1 shy of the number needed to grant the petition),” Upstate Citizens for Equality wrote in a post on Facebook on Monday. “There are other challenges in other circuits making their way to the high Court and we believe that our case will help in their cause.”

Oneida Nation Representative Ray Halbritter with former vice president Joe Biden are seen at the opening of the Museum of the American Revolution in Philadelphia, Pennsylvania, on April 19, 2017. Photo: Oneida Indian Nation

With the denial of the petition, the Oneida Nation has survived all legal challenges to its land-into-trust application. The tribe was forced to go through the process after the Supreme Court, in a disastrous 2003 decision known as Sherrill v. Oneida Indian Nation, said it was the only way for the tribe to reassert sovereignty over its ancestral homelands in upstate New York.

After a five-year review, the Bureau of Indian Affairs in 2008 agreed to place about 13,000 acres in trust for the tribe. The land represents just a small portion of the 300,000-acre reservation that was guaranteed to the tribe by the 1794 Treaty of Canandaigua.

The 2nd Circuit Court of Appeals eventually rejected two different lawsuits that challenged the acquisition and the legality of the land-into-trust process. One wasUpstate Citizens and the other was Central New York Fair Business Association v. Zinke.

In May, the Supreme Court turned down the Central New York petition without fanfare. But Upstate Citizens was already pending at that time, so Thomas and his law clerks were aware as far back as April of an opening to attack the land-into-trust process.

And in his dissent, Thomas acknowledged that the 2nd Circuit properly applied the Supreme Court’s Indian law precedents. Yet he thinks that was the wrong move and that it’s time to “reconsider” those well-settled precedents, some of which date back centuries.

“It is time to fix our error,” Thomas wrote. “We should have granted certiorari to reexamine our Indian Commerce Clause precedents, instead of standing idly by as Congress, the Executive, and the lower courts stray further and further from the Constitution.”

Justice Clarence Thomas speaks to Stetson University College of Law in Gulfport, Florida on February 2, 2010. Photo: Stetson University
Despite the win for the Oneida Nation, Indian Country as a whole is facing renewed scrutiny of the land-into-trust process. Efforts began in earnest during the prior session of Congress and have continued in the ongoing session, as Republicans on a key committee have repeatedly questioned whether tribes should be able to restore their homelands.

“When they hold a Congressional hearing on the 1934 Indian Reorganization Act in a subcommittee that conducts oversights and investigations and does not do Indian policy, and when the hearing doesn’t feature any tribal leader witnesses, whose interests are they really advancing?” Brian Cladoosby, a former president of the National Congress of American Indians, said in June of the efforts on Capitol Hill.

The Republican-led Trump administration is providing an assist to those efforts by erecting new hurdles in the land-into-trust process. Tribes scored a temporary respite from some of the more controversial changes but the BIA has said it will resume deliberations in 2018 on the Fee-to-Trust Regulations (25 CFR 151).

The Oneida Nation marked the 223rd anniversary of the Treaty of Canandaigua on November 11. The agreement was signed by then-president George Washington following the Revolutionary War. The tribe was the first sovereign to recognize the newly-established United States of America.

“The Treaty of Canandaigua is the oldest valid treaty in the U.S.,” the tribe said on the anniversary of the agreement.