The PBS Masterpiece Amazon channel and PBS Passport have been reveling in the success of the period-drama Jamestown. The series follows the lives of three women who leave England and make the journey across the ocean for a new life in 1619 Jamestown. The series also embraces the Native life and culture of the period, specifically the Pamunkey tribe.

In a conversation with Indian Country Today’s Vincent Schilling, Kalani Queypo described what it was like to be part of the series, and how it felt to honor the culture and language of the Pamunkey people.

Vincent Schilling: Congratulations on the role Kalani. So first tell us who you are portraying in Jamestown.

Kalani Queypo: Thanks! I play the role of Chacrow, who is a Pamunkey warrior from the nearby village. He is later revealed as the translator and right-hand man to the Chief, Opechanconough. Chacrow eventually befriends one of the Jamestown colonists, Silas Sharrow, and takes him on a journey to find his missing brother.

Vincent Schilling: How do you like your role in this series and portrayal of your Native character?

Kalani Queypo:  Playing the role of Chacrow is a huge challenge. But that said, this is also a huge opportunity. The portrayal of Native characters are rich and multi-layered in this series, which makes it so gratifying to play. Oftentimes Native characters are simply “sidelines” in so many period films and television projects. But in Jamestown the Native characters are highly-nuanced with agendas and humanity. We are very much an integral part of the storyline.

Vincent Schilling: That is great to hear. So how much information do you know or have you researched in terms of portraying a Pamunkey?

Kalani Queypo: I have the privilege of working with Buck Woodard, an incredibly knowledgeable and generous historian, with whom I had worked with in the past on a feature film. He serves as our cultural consultant. He always makes himself available to share his wealth of knowledge and actually works with us on set, advising the entire production on the design aesthetics, props, makeup, hair, costumes, everything really, down to the physical behavior and customs of the Pamunkey people. This keeps him very busy.

Vincent Schilling: So you are speaking Pamunkey in this series.

Kalani Queypo: I am speaking the Pamunkey language which has been specifically reawakened for this project by Dr. Craig Kopris after over 150 years. I work closely with my language coach, Jesse Bowman Bruchac, who teaches me every sound and word with meticulous attention to the fine details. I believe that you learn a lot about a Nation when you study their language. There are so many clues as to the approach they have to life, their surroundings, the way they structure their ideas and the manner in which they speak. Every language has a specific viewpoint, a worldview that is affected by their communities as well as their interactions with outside peoples who came to settle or trade with them.

Vincent Schilling: Have you reached out to any members of the tribe in regards to your character?

Kalani Queypo: The producers took great care not only to invite First Nations people to play the “core” warriors and villagers, but within that group of fifty plus actors, were six individuals who descend from the Pamunkey lineage. That was exciting. I felt honored to be speaking their language , which most of them hadn’t heard, with that kind of fluency, in their lifetime. It was a humbling moment when Debbie Cook, a Pamunkey descendant, told me that I did a great job speaking their language and representing their people in this series.

The ‘Jamestown’ series flew in 50 First Nations people from North America and Canada to portray the Native cast.

Vincent Schilling: The Pamunkey recently received federal recognition, considering the history of Pamunkey to American history, what do you make of the irony of such a historical tribe, that is so late to be recognized?

Kalani Queypo: I remember years ago, I was shooting The New World, a film about Pocahontas, where I played her brother, Parahunt. I worked with a lot of the local Virginia Indians and started following the struggle with the Pamunkey people, who were fighting for their federal recognition. It took decades for them to finally be recognized by a political system that designed a paper genocide that was almost successful in erasing their existence. What makes this so ironic is that not only were the Pamunkey well documented by the settlers as being the original people of that region in Virginia, but they were instrumental in providing food and a safe haven to the first settlers of Jamestown in 1607. Without their help, Jamestown colonists never would have survived. Pocahontas is one of the most well-known female figures in all of American history, and the fact that her people were only officially recognized in 2016 is ridiculous! I am very happy for them and was thrilled that the other six Virginia tribes got their recognition as well this year! 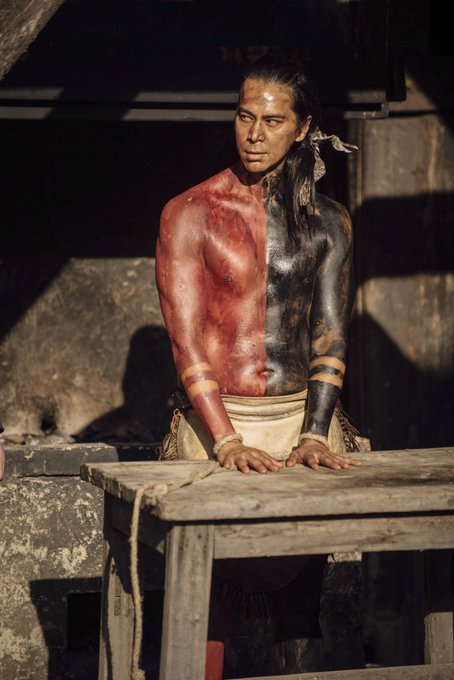 Vincent Schilling: Wow, that is a lot you have surely put into this. Which leads me to ask, how has your career as a Native actor been going?

Kalani Queypo: I think this is a very exciting time for Native actors. There are so many trailblazers who have come before us who have created far more opportunities for us today. I take every role I do very seriously and I work extremely hard. I realize that producers and directors and writers are always watching. They study the way you conduct yourself on set and they are judging your delivery of performance. My job is to make them respect me and to build our professional relationship. Decisions on their future projects, regarding Native content and Native roles, are directly influenced by their experience of working with me. That’s a huge responsibility. And beyond that, Native people are always watching, too. My job is to represent well, inspire them, and continue the trailblazing for the generations that come after me.

Vincent Schilling: What is in the future for you?

Kalani Queypo: I think it is very important for Native artists to be writing and producing their own content as well. We want to present our stories and with our sensibilities. We want to find our way into the positions of making the decisions on Native content and Native roles in this industry. I currently am writing an Episodic project, a feature film and even a musical production created for stage. This keeps me very busy. There are many exciting projects being developed by amazing Native artists like Lucas Brown Eyes, Steven Paul Judd, DeLanna Studi, Jason Gavin and Mary Kathryn Nagle, just to name a few. I am so excited to see what will be coming forth on stage and screen in the next few years.

Vincent Schilling: You are a busy man! Any words for young aspiring actors?

Kalani Queypo: Don’t wait for opportunities to come to you, create them. Always ask yourself what you can be doing to strengthen your craft, the work will come, you need to be ready.