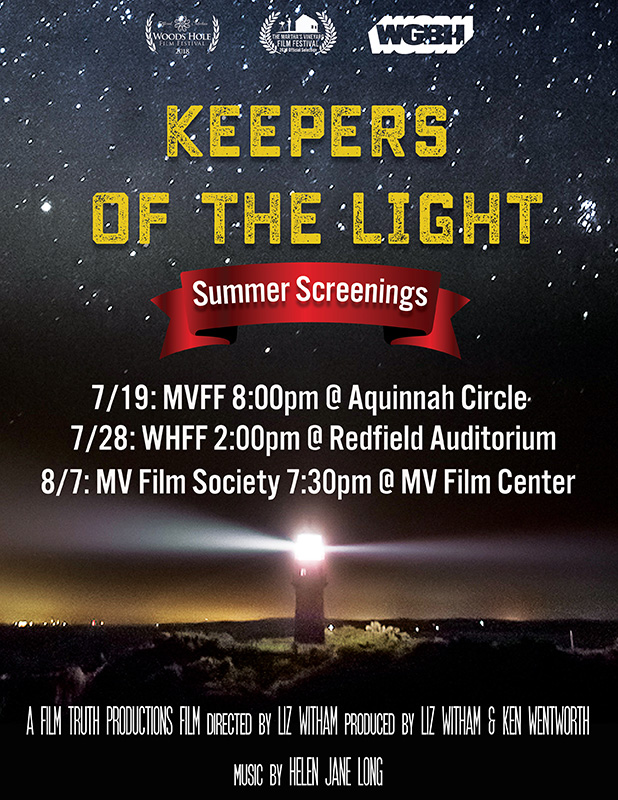 “Keepers of the Light” is a new documentary about a small, intact Island community seen through the prism of its internationally recognized lighthouse.

Nominally, the film, by Island documentarians Liz Witham and Ken Wentworth, is about Gay Head Light in Aquinnah. But the film is really about the culture and ways of the Wampanoag Tribe of Gay Head, who settled Aquinnah several thousand years ago, and Anglo-Europeans who arrived 400 years ago.

The film touches on the nationally publicized move of the lighthouse in 2015. The documentary uses the event to tell the story of a small settlement’s long culture, articulated through the voices of settlers living its past and present.

You can see it first on Thursday, July 19, at 8 pm, part of the Martha’s Vineyard Film Festival at an outdoor screening at Aquinnah Circle. Food will be available, and the event is free and open to the public. Music will be provided by Witham’s family: music stars Kate Taylor (Witham’s mom) and cousins Isaac and Ben Taylor.

The Times sat down with husband and wife team Witham and Wentworth to talk about “Keepers.”

“We began talking about the movie in 2013, when the conversation about saving the lighthouse was going on,” Witham, a lifelong Aquinnah resident, said. “I felt it would be a cool opportunity to tell the story of the community in a way that people could really engage with the history of Aquinnah, and its place in the larger maritime history.”

“It’s a story of how people in every generation have had to work to keep the lighthouse in a place where people have lived for generations and generations,” she added.

The film was a chance to give voice to their story, help represent the story of the community, and to give light to their history. “Most people don’t live in a town with Native Americans — people who have a connection to a place with a time continuum that other people don’t have,” Witham said.

Witham and Wentworth’s one-hour film shows footage of the 129-foot journey of the light to safe ground in 2015. It tells the story of the fundraising effort of the 400-member year-round community of Aquinnah to raise the $3.5 million to $4 million needed — an amount equal to the entire annual town budget.

But it’s the voices and faces of Aquinnah’s people that stay with you after the credits roll. Several vignettes in the film stand out:

Kristina Hook, a Wampanoag tribal leader, shows up as a doer. But when she speaks of the land — the clay cliffs and white sands older than dinosaurs —her face softens, crumbles a little, and unbidden tears accompany a crack in her voice. “To see the cliffs disappearing … it is hard sometimes,” she said.

A segment with charter boat Captain Buddy Vanderhoop is another standout vignette. In 1884, during a January storm and gale, the steamer boat “City of Columbus” ran aground on rocks offshore of the light, with 132 souls aboard. “The channel is narrow here, and the rocks will eat your boat,” Vanderhoop said, navigating a safe passage through the channel.

His people and others in the community rowed their dories several times into the maelstrom and saved 29 lives — the only survivors. Looking at the beach off his port bow, Vanderhoop, a man not given to showiness, pointed and said, “My grandfather and great-uncles were on the lifesaving team.” It becomes easy to understand how history is ingrained and alive in this small up-Island community.

After its Thursday, July 19, premiere in Aquinnah, “Keepers of the Light” will open the Woods Hole Film Festival on Saturday, July 28, and screen at the National Lighthouse Museum in Staten Island, N.Y, on Saturday, August 4. The film will return to the Vineyard for a screening at the Martha’s Vineyard Film Center in honor of National Lighthouse Day on Tuesday, August 7. The filmmakers and those profiled in the film will be at all summer screenings for postscreening Q and As. The film will be broadcast on WGBH Boston (PBS) in October as a Thursday night special presentation.