Two Penobscot root clubs collected by A. H. Gottschall (object # 97-84-2123 and 97-84-2124) came to the Penn Museum from the Academy of Natural Sciences in 1936. Adorned with intricate carving and paint, root clubs are a long-standing tradition of the Penobscot tribe located in Maine.[1] Although we know nothing about the individual who made this particular club, we can learn something about the object by looking at traditional root club makers today. 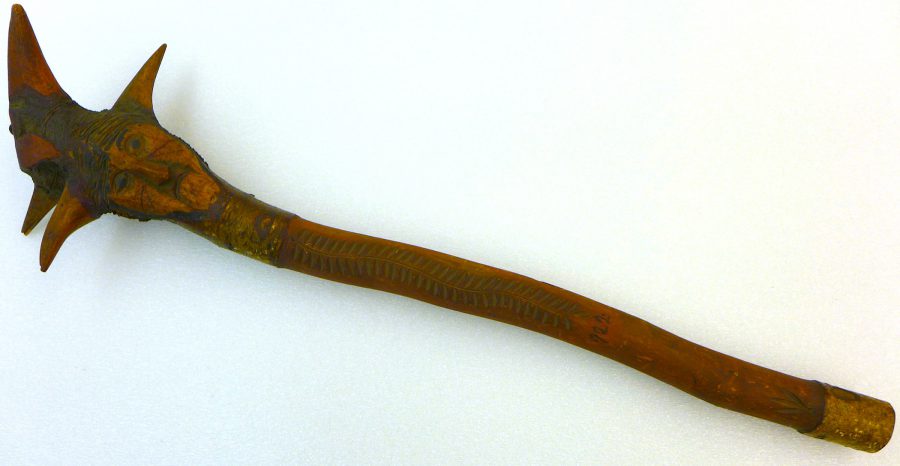 The individuals who specialize as root carvers take these pieces through a specific process. Stan Neptune, one of the best-known root carving specialists, shares his process. First, a small birch tree is carefully uprooted, preserving the integrity of the tree’s central foundation. Smaller roots are chipped out and hammered. The root is cleaned and then decorated. The base, which becomes the top of the club, is shaped into forms, usually an animal or head. Small tools are used to chip out more intricate designs. [2]

Neptune stresses the uniqueness of each root club, saying since each root is “one of a kind,” the products reflect this quality. That is certainly true of the Penn Museum’s club. Upon observation, the club is not a straight line. It curves with the likeness of the birch tree it came from. The head has protruding spikes, carved to follow the grain of the original roots that grew from there. The head is heavier than the rest of the tool. 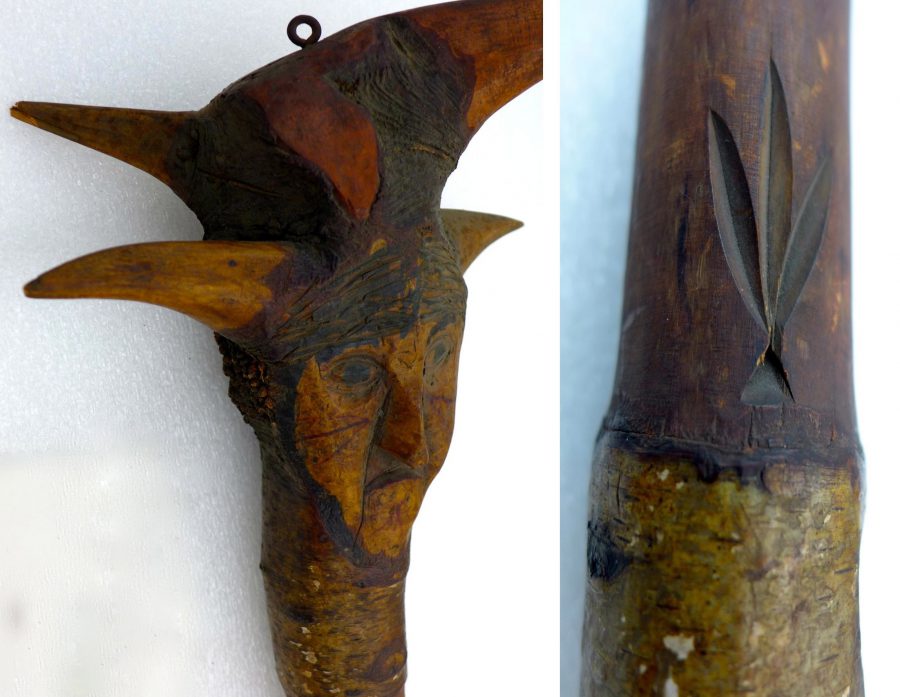 This club is covered in striking detail. In addition to its unique form, the club is adorned with carvings of fern-like vegetation, running down the handle, with one standalone plant towards the base, on the back. The base is indicated by a thicker part of the birch. A connection between man and nature is exemplified by the face.[3] Expression is marked by painted eyebrows and eyes, and the indents on the slumping mouth seem to indicate a degree of aging. Red lines are painted on the cheeks, and the striking marks on the forehead could either be hair or decoration. The time put into this composition is clear.

Root clubs started as weapons, then became ceremonial tools as spirit clubs, then became tourist pieces. Increasing complexity in the use of ornamental design parallels the market that grew for these objects.[4] Upon initial search, a number of old root clubs are listed on auction websites, where they are largely considered to be a collectible art form.[5] A ring at the very top of this club indicates how the piece was adapted to be hung on a wall, perhaps as decoration.

For the Penobscot, these clubs are both an artistic object and a valuable tool passed through time. Stan Neptune recalls how he initially learned to carve by having an interest in his culture. He went to an elder, Senebah Francis, and in addition to learning more about his heritage he was taught the skill of root carving.[6] He went on to teach this to his son, and both of them now pass along this to younger members of the nation, through the Penobscot Boys and Girls Club and other community events.[7]Here, we see root carving as an act of maintaining traditional art forms.[8] The creating of these goes beyond a form of preservation, it is a continuing practice that affirms Native existence.

Note: The Abbe Museum in Bar Harbor, Maine, will feature some of Stan Neptune’s root clubs in an upcoming exhibition in 2018, to be co-curated by Joan Lester, Curator Emeritus from the Boston Children’s Museum.[9]

This object analysis was conducted for the Fall 2017 University of Pennsylvania course “Anthropology of Museums.” Students are examining Native American objects in the American Section of the Penn Museum by combining material analysis (elements, construction, design, condition, etc.) with documentation (texts, photographs, ethnographic data, etc.). Since some objects have minimal provenance data, we seek out similar materials, consult research articles and archives, and consider non-material evidence (oral traditions, ecosystems, museum memories, etc.) that might illuminate these objects. This research is designed to expand our understandings of object lives, using insights and information gathered from inside and outside of the Museum.

For an overview of the 2017 object studies in the Anthropology of Museums class, see: