Visitors walk around Mantle, the Virginia Indian Tribute, Tuesday following the dedication of the monument, located inside Capitol Square in Richmond. 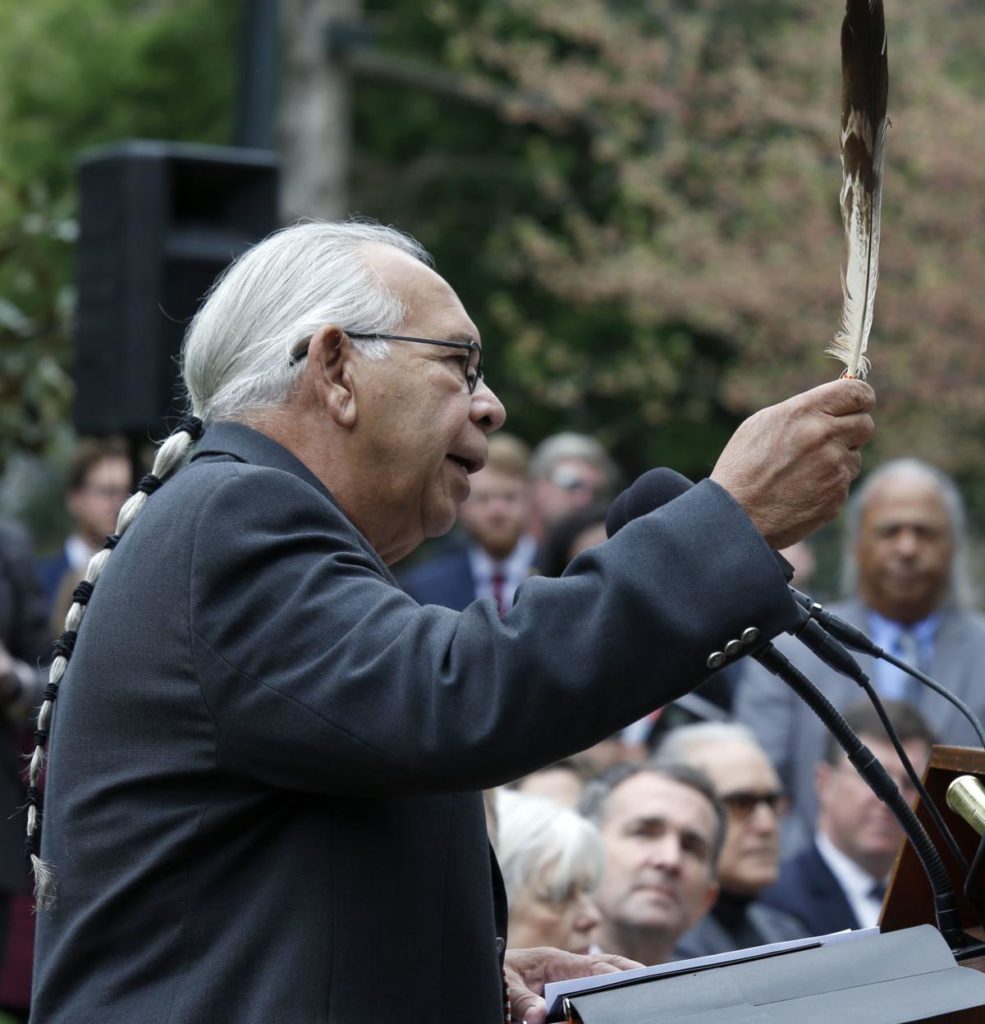 Upper Mattaponi Indian Tribe Chief Emeritus Ken Adams holds up an eagle feather as he prepares to deliver a prayer during the dedication ceremony of Mantle, the Virginia Indian Tribute.

The dignitaries gathered in Capitol Square included governors, legislators, business leaders and others who had worked to establish a fitting monument to Virginia’s Indian tribes.

But the last word fell to Ken Adams, chief emeritus of the Upper Mattiponi tribe and the originator of the idea for a monument to Virginia Indians in the heart of the state government that had often ruled them cruelly.

All of the 11 tribes recognized by the state were represented at the commemorative ceremony, including seven that also have received federal recognition and the benefits that comes with it – the Pamunkey, recognized by a federal administrative process three years ago, and the Upper Mattaponi, Chickahominy, Eastern Chickahominy, Rappahannock, Nansemond and Monacan, designated under federal law adopted by Congress and signed by President Donald Trump earlier this year.

“Mantle is a reality, as is federal recognition of six more tribes,” said Alan Michelson, a New York-based artist and Mohawk member of Six Nations of the Grand River, who designed the monument in Capitol Square next to the Bell Tower along North Ninth Street.

The title refers to the mantle of earth, the organ that builds the protective shell of mollusks, and the mantle of responsibility conferred on leaders, said Michelson, who designed the spiraling walk that leads to a meditation circle and fountain engraved with the names the tribes and 20 rivers associated with them.

“Mantle is a Chief’s cloak,/A pathway, water, a seat for the weary,” said Frances Broaddus-Crutchfield, a member of the Virginia Indian Commemorative Commission and major donor to the monument, in a poem she recited for the ceremony.

The monument began after Del. Chris Peace, R-Hanover, acted on Adams’ idea with a resolution the General Assembly adopted in 2009 and then-Gov. Tim Kaine signed into law. The commemorative commission joined forces with the Virginia Capitol Foundation, which raised the private funds to make it happen.

“Mantle’s impact is far greater than its footprint alone, beautiful as it might be, in Capitol Square,” said Paul Nardo, clerk of the House of Delegates, who said the monument also will serve as “a testament and a training tool.”

Gov. Ralph Northam, who spoke to a sizable crowd that included former Gov. George Allen and his wife, Susan, called Mantle a “symbolic tribute to Native Virginians past, present and future,” and “this magnificent creation.”

Northam reminded the audience that the history of Virginia’s tribes extends thousands of years “before those settlers staggered ashore” at Jamestown in 1607. It also includes a painful chapter that began with the state’s adoption of the Virginia Racial Integrity Act in 1924, designed to prevent racial intermarriage and enforced ruthlessly by Dr. Walter Plecker, then the registrar of statistics.

That history also figured in the blessing and prayer given by Adams, who said, “We can’t thank you enough for bringing us out of the dark ages we experienced not too long ago.”

For the representatives of Virginia tribes, the monument was a fitting testament to all 11 tribes recognized by the state, including those that have not yet received federal recognition.

“It’s about time we have a monument,” said Sid Turner, a member of the Nottoway Indian tribal council, which has begun talking about seeking federal recognition. “We’re finally recognized as a tribe of Virginia.”

“We see it as an opportunity to help our people,” Gray said.