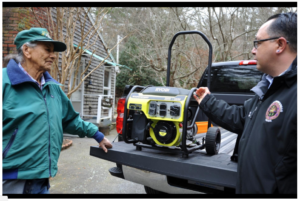 MASHPEE — The native Wampanoag people used to ease the effects of winter storms by moving their longhouses and wetus away from the coasts and burying their agricultural goods in holes they had dug in the ground.

As Cape residents heed local authorities in the wake of a succession of nor’easters, the roughly 2,600-member Mashpee tribe, whose ancestors lived off land in Massachusetts for some 12,000 years, rely on the guidance of two individuals: Andrews, who has more than a decade of experience working for the Federal Emergency Management Agency, and 29-year-old Allyssa Hathaway, the tribe’s emergency preparedness specialist.

In the event of a natural disaster, the two staffers conduct wellness checks on tribe members, respond to reports of damage to homes or tribal property and collaborate with local and state authorities in cleaning up debris from storm damage.

As residents braced for their second nor’easter in seven days, Andrews and Hathaway were conducting wellness checks of tribal elders Wednesday. Four days earlier, they were delivering generators and helping to transport their kin to tribal headquarters, which served as a warming station during the storm.

“Our primary focus and first concern is the safety of our tribal community,” Andrews said, as he consulted with an elder outside a house that had been without power since Friday’s storm.

About 40 elders — tribe members representing values and wisdom who have reached a certain age — live within the emergency department’s radius, Andrews said.

“It’s good to have somebody we can contact,” said 95-year-old Vernon “Silent Drum” Lopez, chief of the Mashpee Wampanoag Tribe, who has lived off Meetinghouse Road for more than 40 years.

Lopez, who became chief in 1999, had his power restored early Wednesday. Since Friday, he had been relying on a generator Andrews helped to set up, which provided for the use of a microwave, a reading light and several electronic devices, he said. Lopez was one of the last tribe members to have power restored.

The tribe’s emergency management department received a major federal grant last year through the Department of Homeland Security, which Andrews said would go toward building on its capacity and the hiring of more staff. Altogether, the tribe’s emergency response branch is funded through nine grants, Andrews said, and mirrors the National Incident Management System, which emphasizes preparedness, response, recovery and mitigation.

“In the future we hope to have an operations section, a logistics section and a planning section just like the state and the federal government,” Andrews said.

As the nor’easter last weekend raged on, Andrews responded to several resulting emergencies, including a call to repair a roof in the midst of high winds.

“A 12-foot section of the roof ripped off,” he said. “We had to get up there during the storm and tarp it down.”

Throughout his career, Andrews has taken part in rescue efforts in more than 25 presidentially declared disasters, including hurricanes Katrina and Sandy.

In the wake of recent mass shootings, Andrews said his department also was coordinating with a Sandwich firm that specializes in active-shooter training to write training exercises for tribal emergency response personnel.

A tribal spokeswoman said she was not aware of any significant damage to tribal property caused by last weekend’s storm.