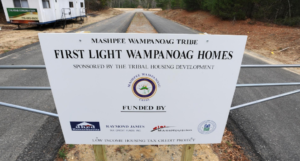 MASHPEE — Members of the Mashpee Wampanoag Tribe learned Sunday whether they would be selected among a pool of applicants seeking affordable housing units in the soon-to-be-built tribal housing development.

The tribe held a lottery to decide who will get to live in the First Light Wampanoag Homes Development, located at 184 Meetinghouse Road — a 42-unit low-income housing project subsidized by the Massachusetts Department of Housing and Economic Development.

“We’re full speed ahead with our construction,” said Coreen Moore, chairwoman of the Mashpee Wampanoag Housing Commission, which is comprised of seven tribe members.

In December 2017, the state announced $1 million in funding for the project that would come in the form of state and federal tax credits, which totaled close to $11 million in equity and support, according to a tribal press release issued Sunday. Those low-income housing tax credits give companies incentive to invest in affordable housing projects to offset their federal tax liability.

The project was originally called Mashpee Wampanoag Village, and Moore said the development will consist of eight duplexes with 16 units, set aside for tribal elders and disabled members, and 26 two- and-three-bedroom units for families.

Tribe members who were chosen by the lottery still have to go through a thorough application approval process. Those who were not selected, as well as those in the pool who did not meet the application deadline, could be put on a waitlist in case units open up in the future, Moore said.

Site work has been underway since February, according to the release. The first housing unit, likely a duplex, should be available by the first of July, according to Michelle Tobey, the tribe’s housing director.

Calamar Construction is the project’s general contractor, Moore said. The roughly 58-acre site has been cleared, and Calamar may begin laying building foundations sometime this week, she said.

Moore said a needs assessment conducted some years ago found a dire housing need within the Mashpee Wampanoag community. Many tribe members live off Cape Cod in places like Taunton and Fall River because of the Cape’s high cost of living, and the tribal family size has grown as a result of multigenerational living.

The project, she says, is a way of bringing those far-flung tribe members “back to their homelands.”

“We’ve never had our own housing stock,” Moore said.

Moore and Tobey said the project is the realization of the vision of Alice Lopez, the housing department’s maiden director, who passed away in 2011. Planning efforts to build affordable housing for the Mashpee Wampanoag community date back to more than a decade ago, when the tribe received $2 million from the American Recovery and Reinvestment Act — a stimulus bill signed into law by President Barack Obama in 2009 — to build a wastewater treatment plant and improve the surrounding infrastructure on Meetinghouse Road.

But Lopez, described by tribe members as a tireless advocate of the needy and homeless, was central to the effort. She suffered a blood clot in December 2010 following an ankle fracture she sustained walking the grounds of the proposed development, dying on New Year’s Day 2011 at age 49. Moore says Lopez is “one of the driving forces” keeping her motivated to bring the project to fruition.

“Everyone holds Alice in high esteem,” she said.

On March 30, the tribe held a ceremony at the site recognizing the various partners involved in the project, which included the Massachusetts Department of Housing and Community Development and the Raymond James Tax Credit Fund Inc., an organization based in St. Petersburg, Florida, the release says.

Tobey offered praise for the state for their commitment to the project.

“We have been working diligently; that’s what made this application so attractive,” she said in a statement.

Mashpee Wampanoag Tribal Chairman Cedric Cromwell said the tribe is “a step closer to providing much-needed housing for our people.”

“The dream is becoming a reality,” he said in a statement.