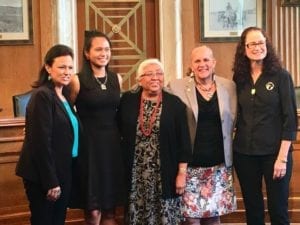 For us, the preservation of our language ultimately is the key to preservation of ourselves. With our language, we are once again able to properly introduce ourselves to our Ancestors when we pass from this world into the next.” — Mashpee Vice Chairwoman Jessie Baird at Senate Committee on Indian Affairs hearing, “Examining Efforts to Maintain and Revitalize Native Languages for Future Generations.”

Ms. Baird, who led an effort to revitalize the Wampanoag language as well as a Wampanoag language school and programs, spoke in front of the Senate Committee on Indian Affairs on Wednesday, August 22, during an oversight hearing titled “Examining Efforts To Maintain And Revitalize Native Languages For Future Generations.”

The hearing featured testimony from the commissioner of the Administration for Native Americans, tribal representatives and other stakeholders who discussed efforts to promote and preserve native languages.

Ms. Baird’s testimony arrives at a time when the tribe’s land, a crucial piece for revitalizing the language, is under threat of losing federal protection. And Ms. Baird made it clear in her presentation.

“I want to underscore that the federal government also played a crucial role in helping us preserve our language when in 2015 it set aside a federally protected reservation on which we are able to engage in true self-determination,” Ms. Baird is quoted in her written testimony. “This level of language instruction would be nearly impossible in an off-reservation public school environment and we are praying that our lands remain in trust in order to continue this work.”

She told the senators that the tribe’s reservation allows the tribe to provide a school setting under its own law, which provides the appropriate culturally based education.

Ms. Baird’s efforts to revitalize the language started more than 20 years ago. The process that initially started at Massachusetts Institute of Technology (MIT) and led to creation of the Wopanaak Language Reclamation Project. The program created an intertribal cooperative project for the tribes of the Wampanoag; has trained and produced two credentialed Wampanoag linguists; and now has more than 15 certified language teachers.

Ms. Baird said that they are developing a dictionary that already includes more than 12,000 entries, as well as a curriculum for second language acquisition of adult learners. The language department offers a three-week summer youth program for ages 5 to 13, as well as classes that teach children in Wampanauk during the school year. The department also offers family immersion language camps, and community language classes in Mashpee, Aquinnah, Plymouth, and Boston.

For the first time, the program will be adding a 1st grade class.

Ms. Baird, in her testimony, provided a brief history of the language. The tribe—which she said was the first Native American tribe to do so—created an alphabet in the early 1630s. Yet after years of oppression and attempts to assimilate the tribe into the non-Indian community, the language was lost and not spoken for six generations.

“But today, seven generations later, we have used those written tools left by our Ancestors to heal this wound, as we are the first American Indians to have reclaimed a language with no living speakers,” she said.

Ms. Baird proceeded to explain to the senators the interconnection between the tribe’s language and their land.

In her written testimony, she wrote:

“The interconnectedness of our language and our land is even more fundamentally explained by our word ‘nutahkeem,’ which loosely translated means ‘my land,’ but is better understood as ‘my land that is not separate from my body.’ In ourlanguage, there is no other way to express, ‘my land.’ Another of our words—’nupunuhshâm’—means both ‘I have fallen down,’ and ‘I have lost my land rights,’ that my feet (part of my body/which is also my lands) have been removed from me. Our land and our language are inextricably tied to one another, and to our ultimate survival as a people.”

Ms. Baird has a master’s degree in science in linguistics from MIT; in 2010, she was named an MacArthur Fellow, which came with a John D. and Catherine T. MacArthur Foundation fellowship in recognition of her efforts in reclaiming the Wampanoag language. She has taught the Wampanoag language since 2014. Additionally, she sat as an appointed commissioner on the Commission on Language Learning, created by The American Academy of Arts and Sciences in response to a bipartisan request from Congress to study the nation’s language education needs.

The chairman of the committee, Senator John Hoeven (R-ND), issued a statement following the hearing, saying that preserving ancient languages has been a goal for Congress.

“Through the passage of the Native American Languages Act and the Esther Martinez Native American Languages Preservation Act, Congress formalized the promotion of native languages,” the senator said. “These laws have helped facilitate opportunities for native communities to learn, research, and preserve their languages—ultimately strengthening their cultures and traditions.”

‘Today, seven generations later, we have used those written tools left by our Ancestors to heal this wound, as we are the first American Indians to have reclaimed a language with no living speakers.’