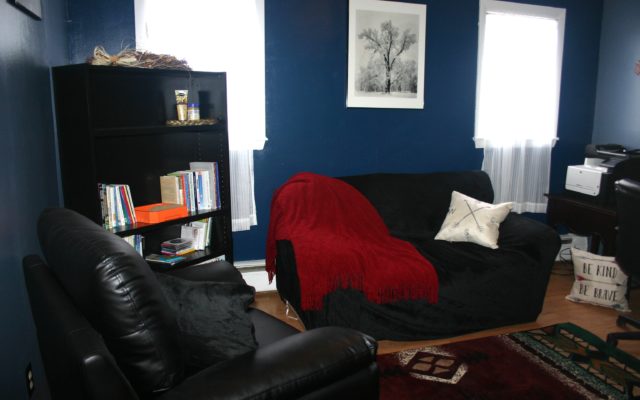 The counseling room at the Aroostook Band of Micmacs Domestic and Sexual Violence Advocacy Center provides a safe and confidential environment for victims of sexual assault to share their experiences with one of the center’s three advocates. (Melissa Lizotte)

According to program director Angel Gilberti, the $899,135 grant is one that the center reapplies for every three years in order to keep the center operating. The funding covers the wages for three full-time advocates and supports programs such as the center’s Presque Isle-based emergency shelter, victim outreach, on-site counseling, legal assistance and transitional housing.

Gilberti noted that the funding has been critical in helping the program also continue to provide community awareness events, youth education and staff training to both the Micmac and surrounding community.

“We serve a little over 100 people, which might not seem like much but really is when you think about the hours spent in court and in being a support system for people who are trying to rebuild their lives,” Gilberti said.

The advocacy center started in 2012 and subsequent funding allowed staff to expand programs to include the current counseling and legal services. They frequently partner with the Aroostook Mental Health Center’s Sexual Assault Services and the Hope and Justice Project for community awareness initiatives and also host events on their own.

To commemorate National Domestic Violence Awareness Month in October, the center will host a tree lighting on Wednesday, Oct. 3, that will honor both survivors and those who have lost their lives to domestic violence. The event will take place at 5 p.m. in the Micmac administrative building, located at 7 Northern Road in Presque Isle.

On Monday, Oct. 8, the center will host its 7th annual Walk to End Domestic Violence, beginning at the Micmac Council Chambers within the administrative building. The walk will begin at 4 p.m. and include a performance from the Micmac women’s drumming group and a meal for attendees.

Gilberti stated that even with the increased public awareness of domestic violence and sexual assault, the support that she and other advocates provide to victims has never been more crucial.

“I think if we didn’t have this program, people would be much less likely to come forward,” Gilberti said.