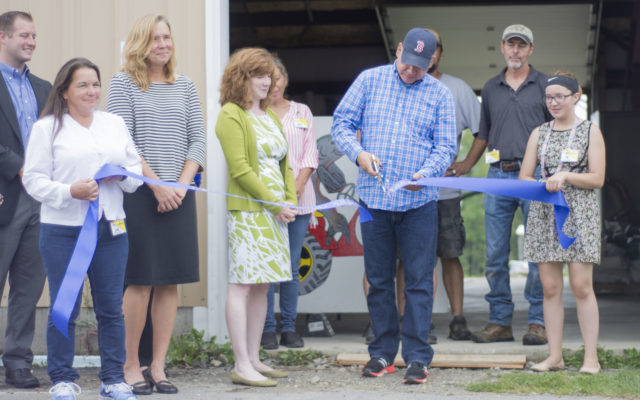 Aroostook Band of Micmacs Chief Edward Peter-Paul is joined by political and community representatives as well as members of the Micmac Farm as he cuts the ceremonial ribbon on Aug. 28 in celebration of the fish hatchery at the farm hitting full capacity at 50,000 brook trout. (Christopher Bouchard)

The Micmacs began raising fish at the complex in 2015 and now, three years later, they have hit full capacity with 50,000 Maine brook trout in the 34,000 gallon land-based aquaculture facility.

The operation was primarily started with a $200,000 U.S. Fish and Wildlife grant, and with funds from several private donors as well as from the federal Bureau of Indian Affairs and the Stephen and Tabitha King Foundation.

The trout, which are raised without harsh chemicals or antibiotics, have tribal significance and are considered to be a natural indicator of water quality.

Micmac Chief Edward Peter-Paul said he was surprised by the large attendance and honored to be celebrating the fish farm milestone.

“This has been approximately nine years in the making,” he said. “The Mimac Nation has always depended on fish and has, historically, eaten it in abundance. We have lost lands, and the wild fisheries are in need of restoration. Our farm is providing fresh fruit, vegetables, and trout to our community and all of northern Maine.”

The chief added that the farm is now annually producing 12,000 pounds of brook trout, and commented on the long journey that began nearly a decade ago.

“Micmac Farms had many directors over the years,” he said, “each bringing new skills and visions. We’ve had about five different directors or farm managers who have all had a hand in this, from the garden to all the berries, and the different type of vegetables, they all brought something to the farm.”

“We never had any mistakes; we just learned the way not to do things,” he joked, concluding that the hatchery ultimately “brought new knowledge and skills to our community.”

Obediah Racicot told guests that the goals of the USDA and the Maine Natural Resources Conservation Service are “closely aligned with those of the indigenous people.” He said the NRCS “understands and respects” the tribe’s approach of protecting and managing sustainable natural resources that enhance the Micmacs’ cultural integrity and food sovereignty.

Andrea Perry also touched on the issue of food sovereignty, adding that the tribe’s efforts have been “inspiring” to witness.

“We are most excited about the amount of fresh vegetables and fish going back to the tribal community,” she said, “It was recently explained to me by a tribal elder that ‘If we can’t feed ourselves, we can’t be sovereign.’ It is this reality of providing food for the community in a way that honors cultural tradition that most inspires us now.”

Lawrence commented on her first visit to the fish hatchery two years ago, and the rapid progress made by the tribe.

“The Sewall Foundation is very much excited to be a part of this work,” she said. “It’s not just about raising food, but really doing it well, in a way that heals both the folks and the earth. I am just delighted to see the progress of this facility since I was here a couple years ago. Thank you for allowing us to partner with you. We wish you much success and many blessings for the future.”

Chief Peter-Paul cut the ceremonial ribbon in front of the facility following a closing song from the Mawitan’ej E’pitjig Drum Group. Guests then enjoyed refreshments and tour of the facility.