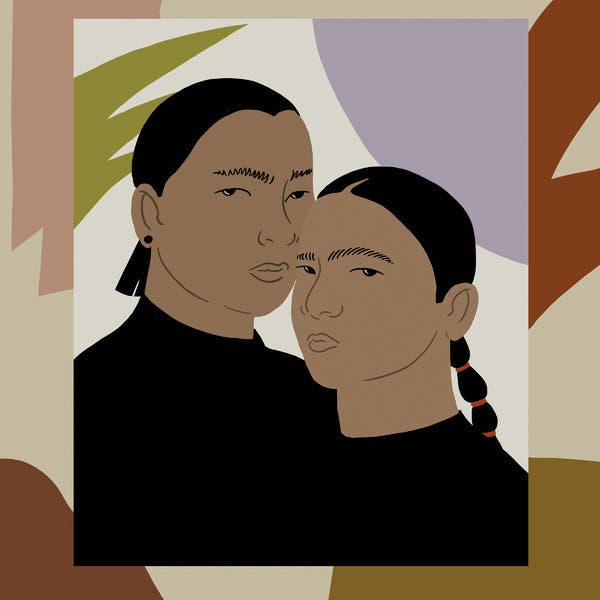 You’re reading In Her Words, where women rule the headlines. Sign uphere to get it delivered to your inbox. Let me know what you think at dearmaya@nytimes.com.

“It’s long past time the topic of missing and murdered indigenous women received this type of national attention.”

Native American women and girls are facing an epidemic of violence that is hiding in plain sight. They are being killed or trafficked at rates far higher than the rest of the U.S. population (on some reservations, women are 10 times as likely to be murdered as the national average, according to the Justice Department). Some simply disappear, presumably forced into sex trafficking.

The bipartisan bill, called the Not Invisible Act of 2019, was introduced last week by Lisa Murkowski, Republican from Alaska; Catherine Cortez Masto, Democrat from Nevada; and Jon Tester, Democrat from Montana. It aims to change what the Indian Law Resource Center has called a “lack of a diligent and adequate federal response” to these crimes.

The bill would create an advisory committee of local, tribal and federal stakeholders to devise best practices to combat the problem and make recommendations to government — efforts that would include paving a way for federal agencies, law enforcement and elected tribal officials to collaborate more easily.

Cortez Masto told HuffPo that she believed the bill would help federal agencies improve and quicken their response by focusing on why these women and girls are disappearing and where those who are being trafficked are going — as well as on how to collect data and educate law enforcement on sex trafficking and start prosecuting offenders.

Data on the issue is scattershot at best, but here’s some of what is known about the problem:

That’s how many indigenous women have experienced physical, sexual or psychological violence in their lifetime, according to the National Institute of Justice.

That’s how many Native American women have been raped or experienced an attempted rape, according to the Justice Department, more than twice the national average.

That’s how many sexual assaults reported by Native American women result in arrest, according to the Justice Department, compared with 35 percent for black women and 32 percent for white women.

The number of indigenous women and girls who have disappeared or been killed in 71 urban American cities in 2016, according to a November report by Urban Indian Health Institute.

In 2016, 5,712 indigenous women and girls were reported missing, but only 116 were logged by the U.S. Department of Justice’s federal missing persons database, according to the National Crime Information Center.

Sign up here to get In Her Words delivered to your inbox. 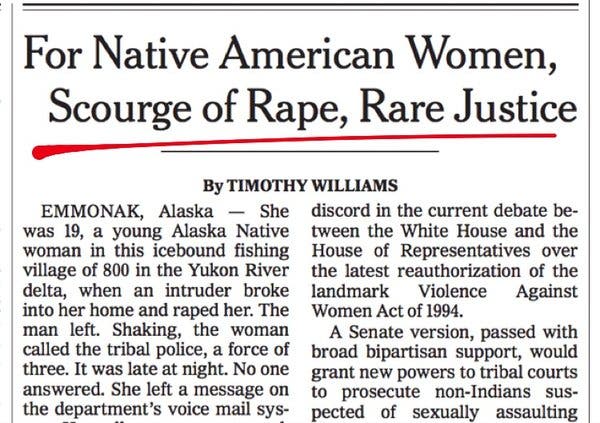 In 2012, a front-page story in The Times delved into the epidemic of rape on American reservations, the obstacles the survivors face and failed attempts by the federal government to help.

Lisa Marie Iyotte, then 43 years old, told The Times she was sexually assaulted on the Rosebud Sioux Reservation in South Dakota, but prosecutors never told her why they did not charge the man arrested in the crime.

He was later convicted of another rape, and when he was released from prison and moved back to the reservation, no one told her, she said.