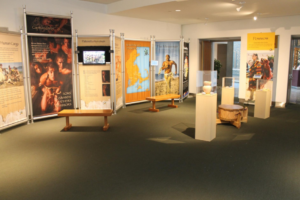 Mashpee Commons will host a Wampanoag Tribal exhibit called “Our” Story, beginning on Sunday. The exhibit has been on display across New England and highlights the Tribe’s history and the meeting between the natives and the Pilgrims. [Courtesy of Plymouth 400]

Display to be installed Sunday at Mashpee Commons.

MASHPEE — An interactive educational exhibit about the history and culture of the Wampanoag people is coming to Mashpee Commons for the month of July.

Plymouth 400′s “Our” Story Wampanoag exhibit will be installed inside a store within the commercial district on Sunday. The display comprises various picture panels and offers viewers a way to watch and listen to presentations on Wampanoag history.

Plymouth 400 is a nonprofit group formed to organize events and programs commemorating the 400th anniversary of the voyage of the Mayflower and the founding of Plymouth Colony.

The modular exhibit has traveled around New England. It was most recently on display at the New England Historic Genealogical Society in Boston.

First proposed in 2014 by tribe member and independent tribal scholar Paula Peters, the installation gets bigger every year as new themes are added. Peters proposed the educational exhibit as a way of highlighting the history surrounding the meeting between the natives and the Pilgrims, but also to present the history from the native experience.

“It’s not a secret that our history has been marginalized and misinterpreted,” Peters said.

Peters said the story of the Wampanoag people is largely left out of the standard account of colonial history. Having written extensively on the subject, Peters said she worries about the spread of misinformation about Native American history.

Peters said the project of putting together the installation included contributions from the Wampanoag Tribe of Gay Head (Aquinnah) and members of other Wampanoag tribal bands. She credits Linda Coombs, program coordinator for the Aquinnah Cultural Center, for her contribution.

The exhibit debuted in 2014 as “Captured 1614,” which offered insight into the “colonization and the roots” of Thanksgiving.

“It grows a little every year,” said Michele Pecoraro, executive director of Plymouth 400.

“This exhibit is intended to create conversations around these crucial realities in our history in an informative and authentic way, honoring the contributions of both cultures and recognizing the complexities of their relationship,” Pecoraro said.

Plymouth 400′s website lists the event at 5 Central Square in Mashpee Commons, across from Bobby Byrne’s.

As it’s grown, the display’s creators have tried to maintain a portrayal of indigenous history that is uncensored and culturally inclusive. Pecoraro said the exhibit was created, written and researched by native people using historical documents and writings from the early days of Plymouth Colony. It takes from the likes of William Bradford, an English Separatist whose journal “Of Plymouth Plantation” was a seminal account of the Pilgrims and the colony.

The installation includes three-dimensional items, such as artwork and pottery. Spectators will also be able to touch a Wampanoag drum, Pecoraro said.

“It can fit in a lot of spaces and configurations, which gives us the opportunity to bring it to a lot of different venues,” Pecoraro said.

The exhibit will be featured next at the Aquinnah Cultural Center on Martha’s Vineyard. In September, it will be installed at the Massachusetts Building during “the Big E” in West Springfield.