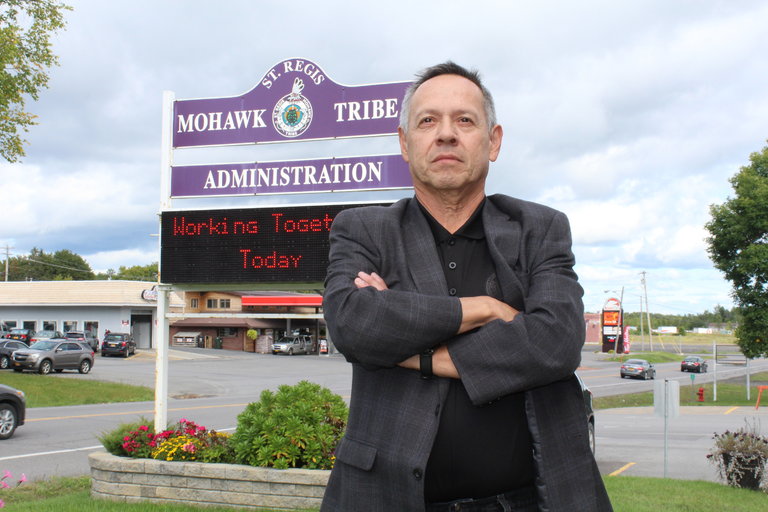 Dale White, general counsel of the Saint Regis Mohawk Tribe. For the Mohawk tribe, the deal with Allergan offers promise of a new revenue stream that could allow the tribe to diversify its income. Credit: St. Regis Mohawk Tribe

The drugmaker Allergan announced Friday that it had transferred its patents on a best-selling eye drug to the Saint Regis Mohawk Tribe in upstate New York — an unusual gambit to protect the drug from a patent dispute.

Under the deal, which involves the dry-eye drug Restasis, Allergan will pay the tribe $13.75 million. In exchange, the tribe will claim sovereign immunity as grounds to dismiss a patent challenge through a unit of the United States Patent and Trademark Office. The tribe will lease the patents back to Allergan, and will receive $15 million in annual royalties as long as the patents remain valid.

The surprising legal move rippled quickly through the pharmaceutical world on Friday, setting off speculation about whether other drug companies would soon follow suit in order to protect their patents from challenges through a patent-review process that the industry despises.

If Allergan succeeds in holding onto its patents, “we will probably see multiple branded companies housing their patents with Indian tribes,” Ronny Gal, an analyst for Bernstein, said in a video message to investors on Friday.

For the Mohawk tribe, a community of 13,000 who live in a rural region on the border of New York State and Canada, the deal offers the promise of a new revenue stream that would bring in income beyond that of a casino the tribe runs near the reservation.

“The tribe has many unmet needs,” Dale White, the tribe’s general counsel, said in an interview. “We want to be self-reliant.”

Mr. White said the tribe was approached in April by a Dallas law firm, Shore Chan DePumpo, which proposed the idea. The tribe has already taken ownership of patents owned by a technology company that Mr. White declined to name, but said the Allergan arrangement is the tribe’s first pharmaceutical deal.

The payments from Allergan — not to mention potential deals with other companies, he said — will give a much-needed boost to the tribe’s approximately $50 million annual budget.

Denise Bradley, a spokeswoman for Teva Pharmceuticals, one of the generic companies that is challenging the Restasis patents, described the deal as “a new and unusual way for a company to try to delay access to high-quality and affordable generic alternatives.” She added that Teva “will be interested to see what comments are made about this tactic by regulatory agencies.”

The announcement Friday is perhaps the most novel attempt to avoid a patent-review process that the brand-name drug industry has railed against in recent years. The process was created in 2011 as a way to streamline patent challenges by allowing them to be decided by an administrative panel, the Patent Trial and Appeal Board. But many patent holders have argued that the process is unfair and unnecessary because patents are already challenged in the federal courts. The Supreme Court will take up the issue next year in the case Oil States vs. Greene’s Energy Group.

In the case of Restasis, the validity of the drug’s six patents — which the company says expire in 2024 — are being heard by the review panel, even as a similar battle is also moving through the federal courts. A trial over the issue recently concluded in U.S. District Court in Texas and a decision in that case has not yet been reached. The deal announced with the Mohawk tribe will not have any bearing on the federal court case. If the company loses that case, its patents would be invalidated regardless of the deal with the tribe.

Brent Saunders, the chief executive of Allergan, said in an interview Friday that the company made the move to avoid what he described as the “double jeopardy” of having the same issue heard in two venues. “We did this to really make sure that we can defend these patents in only one forum,” he said.

A. Robert D. Bailey, the chief legal officer at Allergan, said that though the Supreme Court may ultimately invalidate the review process, the company couldn’t risk losing its patent on Restasis, which brought in $336.4 million in revenues in the second quarter of 2017, its second-biggest selling product behind the wrinkle treatment Botox. “It’s one of our most valuable products, so we can’t wait,” he said.

Mr. Bailey and others said the legal theory behind the Mohawk deal stemmed from a decision by the patent-review panel earlier this yearinvolving the University of Florida, which owned a patent being challenged by the medical-device maker Covidien. The university, which was also represented by the Shore Chan DePumpo firm, successfully argued that the challenges should be dismissed because, as an arm of the state of Florida, the university should be granted sovereign immunity.

Mr. White said the tribe has entered into an agreement with Shore Chan DePumpo, which will vet companies and their patents before referring them to the Saint Regis tribe. “Indian tribes have sovereignty that is stronger than states,” Mr. White said, pointing to recent Supreme Court cases that have ruled in favor of tribes. “We feel that we have an extremely strong case.”

Michael Carrier, a professor at Rutgers Law School who studies patent law, called the announcement Friday a “concerning” development, in part because the Mohawk tribe played no role in developing the drug. And he said the administrative-review panel served a worthy purpose. “Challenges at the patent office play a crucial role in overturning invalid patents, and that role could be undermined by agreements like this,” Mr. Carrier said.