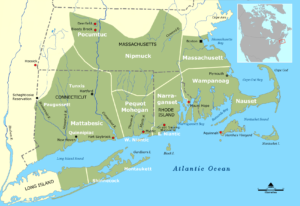 By Nikater; adapted to English by Hydrargyrum – Wikimedia Commons – Image:Wohngebiet_Südneuengland.png, as of 5 July 2006, CC BY-SA 3.0, https://commons.wikimedia.org/w/index.php?curid=5276243

BOSTON — “Our” Story: 400 Years of Wampanoag History, an educational and cultural exhibit about the history and traditions of the Wampanoag tribe, is open to the public at the New England Historic Genealogical Society through April 25.

This traveling, multimedia exhibit is part of the Signature Events and Programs of Plymouth 400 Inc., the organization planning the international 400th anniversary commemoration of the 1620 Mayflower voyage and the founding of Plymouth Colony. Admission to the exhibit is free. The NEHGS, located at 99-101 Newbury Street in Boston, is open from 9 a.m. to 5 p.m. Tuesdays-Saturdays, and 9 a.m. to 9 p.m. Wednesdays.

From 6 to 7:30 p.m. April 18, Paula Peters, a Mashpee Wampanoag and recognized scholar of Wampanoag history, will present “The Critical Backstory to Colonization from the Native Perspective.” In this free lecture, Peters will explore the primary resources of the period through an indigenous lens, providing a fresh, unique analysis of the period. She is also the author and executive producer of the “Our” Story exhibit.

“Our” Story is an interactive traveling exhibit, told in the Native voice, which shines a light on historic events that had a significant impact on the Wampanoag tribe, their relationship with the Mayflower Pilgrims, and the founding of Plymouth Colony, cornerstone events that shaped America’s earliest beginnings. Plymouth 400 worked closely with its Wampanoag Advisory Committee, with representation from both the Aquinnah Wampanoag and Mashpee Wampanoag tribes, in the creation of the exhibit. It was designed to bring to light key legacies of America’s earliest beginnings from the Wampanoag perspective, a voice largely silenced in the colonial narrative. The exhibit received widespread media attention since its debut for its honest and powerful approach to highlighting occurrences in indigenous history that are not commonly known, yet vital to the founding of Plymouth Colony and the building of America.

Each year, a new theme is added to the exhibit; the first installation debuted in 2014 with “Captured 1614,” a critical backstory to colonization and the roots of the American holiday, Thanksgiving. “The Messenger Runner” added new context regarding the Wampanoag tribe’s communication traditions. The “The Great Dying,” depicts the catastrophic effects of a plague that devastated the Wampanoag nation between 1616 and 1619. The newest panel, titled “Powwow” was introduced in November 2017. It explores the traditions around gathering and giving thanks with a mix of interactive video, contemporary native art, and photos collected by the Mashpee and Aquinnah powwows, held annually in July and September respectively.

Plymouth 400 commissioned a Native design team to create “Our” Story to ensure that the exhibit was thoroughly representative of the history of New England’s indigenous peoples. The Indian Spiritual and Cultural Training Council Inc. and SmokeSygnals Marketing and Communications conceptualized, researched, and produced “Our” Story, and members of the Mashpee and Aquinnah Wampanoag tribes portrayed historical figures for the exhibit. The creation of this exhibit aligns with Plymouth 400′s mission to create a commemoration that is historically accurate and culturally inclusive, as indigenous peoples have declined participation or faced misrepresentation and even omission from previous anniversary events.

“Perceptions from Plymouth’s earliest period became etched into the American story when President Lincoln used the iconic symbol of the Wampanoag people and English colonists feasting together in 1621 as a representation of cooperation as he proclaimed our national holiday, Thanksgiving,” said Michele Pecoraro, executive director of Plymouth 400. “Plymouth 400 is committed to creating a commemoration that is historically accurate, which means addressing the realities of the story that don’t reflect the simplified and often inaccurate depictions of the First Thanksgiving. This exhibit is intended to create conversations around these crucial realities in our history in an informative and authentic way, honoring the contributions of both cultures and recognizing the complexities of their relationship.”

“Our” Story was displayed at both Mashpee and Aquinnah Powwows in 2015, in addition to several museums and libraries throughout New England. It received international media attention upon its debut for telling “the story of Squanto, and the millions he represents,” Public Radio International, and for “changing Thanksgiving’s history,” The Boston Globe. For more information on this exhibit, visit http://plymouth400inc.org/OurStory

For more information about the exhibit at the New England Historic Genealogical Society, call 888-296-3447, or visit https://americanancestors.org.