The Yale Peabody Museum of Natural History has completed its transfer of hundreds of Mohegan artifacts to the tribe’s Tantaquidgeon Museum in Uncasville, Connecticut.

Following the brief ceremony, Gredell and White worked with Tantaquidgeon Museum staff to unpack and inventory the collection materials.

The transfer concluded the following day with a ceremony and celebration attended by tribal members, Peabody staff, and members of Yale’s Native American community.

“Today we celebrate the return of very significant, sacred, cultural objects to our people,” Malerba said at the celebration. “We are thankful to Yale University and Peabody Museum for this great achievement. These objects hold special meaning to us in a very particular way. Mohegan tradition tells us that life is a sacred circle, representing wholeness, equality and time without end. Today with the return of these sacred objects, wholeness has been restored to our Mohegan people.” 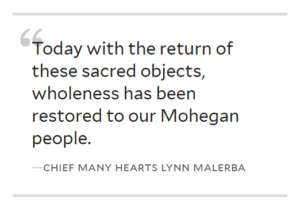 Yale and the tribe finalized the transfer agreement last fall. Yale President Peter Salovey and tribal leaders signed the agreement during a ceremony on Nov. 17 at Woodbridge Hall. The pact followed years of discussions between the university and tribe concerning the objects, which had been housed at the Peabody Museum for decades.

“This was the culmination of a process that involved some challenging conversations at times but was always marked by mutual respect and friendship,” said David Skelly, director of the Yale Peabody Museum. “I enjoyed the opportunity to celebrate the transfer with Chief Malerba, other tribal leaders, and members of the tribe. The objects have found a great home.”

The artifacts include a wooden succotash bowl that had belonged to 18th-century Mohegan matriarch Great Lucy Occum, a wooden mortar, and a doll, as well as hundreds of archaeological objects from Fort Shantok in Uncasville, Connecticut, the site of a Mohegan settlement from 1636 to 1682 and the sacred ground of Uncas, the tribe’s Great Sachem. The Shantok collection includes stoneware, glass beads, iron knife blades, and pipe bowls, shells, and bones. The majority of the items were excavated in the early 1900s.

“We believe that every artifact holds within it the spirit of its maker,” Malerba said.  “These artifacts tell us about who we are as a people; connecting current Mohegan citizens to our ancestors and connecting future Mohegan citizens to our ancestors and our rich cultural history.  It is significant that these important cultural objects represent both a woman, Lucy Occum Tantaquidgeon and a man, Chief Uncas as this reflects the balance of life.  We believe wholeness is exists due to the spirituality and equality of both men and women.”

Founded in 1931, the Tantaquidgeon Museum is the country’s oldest Native American owned and operated museum. John Tantaquidgeon, a longtime Mohegan chief, built the small structure of granite fieldstones with his son, Harold, and daughter Gladys, who was a celebrated tribal matriarch and anthropologist.

The tribe is developing a Mohegan Tribal Cultural Preservation Center, which will facilitate research and scholarship within its collection of more than 10,000 eastern woodland Indian artifacts, across the street from the museum.

The Jan. 20 community celebration featured an exhibit of the transferred materials to give tribe members a chance to learn more about them, Gredell said.

“The exhibit was impressive,” said Gredell, who is the Peabody’s repatriation coordinator and was closely involved in the transfer process. “I was amazed that they were able to organize it overnight.”

The day featured speeches by tribal leaders and Skelly, who was honored during the celebration and presented with a woolen Pendleton blanket. The Yale contingent presented tribal leaders with a bowl hewn from a maple tree that once stood on the Peabody’s grounds.

The transfer of objects signifies the evolution of the long-standing relationship between Yale and the Mohegan Tribe. During the 1700s, Yale President Ezra Stiles studied Mohegan language and spirituality.

The university and tribe have cooperated on the Yale Indian Papers Project (YIPP), a collaborative research initiative that locates, digitizes, transcribes, and annotates materials by or about New England Indians, publishing them as an online resource. In 2014, YIPP researchers discovered historically significant writings by two noted tribal cultural figures: Samson Occum, an 18th-century Mohegan minister and preacher, and Fidelia Smith Fielding, the last known speaker of the Mohegan Pequot language.