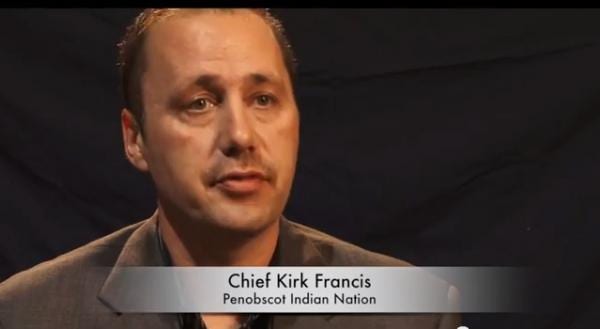 Read more at http://indiancountrytodaymedianetwork.com/2014/02/18/penobscot-chief-calls-investigation-maine-attorney-generals-office-153633?page=0%2C2
Penobscot Indian Nation Chief Kirk Francis is calling for an investigation of  the state attorney general’s office following the latest successful effort by  Attorney General Janet Mills to thwart a tribal-state agreement that would have  benefited all stakeholders while acknowledging the sovereignty of the Wabanaki  nations.

Francis and leaders of the Passamaquoddy Tribe learned on February 12 at a  meeting of the Maine legislature’s Joint Standing Committee on Marine Resources  that a Memorandum of Agreement (MOA) between the Passamaquoddy Tribe and the  Department of Marine Resources (DMR) over elvers fishing licenses and  conditions, which had been hammered out over months of negotiations, would not  be finalized as planned. DMR Commissioner Patrick Keliher said the department  was backing off from its support of the MOA because of “legal concerns” raised  by Mills. According to Indian law experts, neither the U.S. Constitution nor  case law supports Mills’s legal concerns.

The undermining of the Memorandum of Agreement is just the latest in a long  line of actions by the attorney general’s office to quash any enterprise that  would acknowledge, recognize or affirm the tribes’ sovereignty and right to  self-determination, Francis said.

“This is getting infuriating; that office needs to be investigated,” Francis  said in an exclusive statement to Indian County Today Media Network in response  to a request for comment.

Francis testified in front of the marine resources committee a number of  times during the months of negotiations. The Memorandum of Agreement was  critical to amendments to Legislative Document 1625, a bill to codify the rules  over elvers fishing. Although only the Passamaquoddy Tribe was a signatory to  the MOA, the agreement would affect all Wabanaki nations—the Penobscot, the  Houlton Band of Maliseets and the Aroostook Band of Micmacs.

“The negotiated MOA proved that when the tribes are treated as governments  and dealt with as sovereigns, solutions and mutual compromise can provide for an  acceptable solution to both sides,” Francis said. “But there really is no place  in the state system for meaningful government-to-government negotiations and  agreements when the attorney general’s office wants this relationship totally  managed by state law.… The reality is, while this makes them feel better, it is  wrong! And as we’re starting to see, the tribes are not the only ones  seeing this behavior for what it is—criminal,” Francis said.

Mills claimed that the proposed MOA might violate the equal protection clause  in the state constitution by making Indians a “special class” of people, who  would be dealt with differently from non-Indians should legal conflicts arise.  She did not respond to a request for comment.RELATED: Maine Attorney General Under Fire Over Elvers

Akin Gump, the tribe’s Washington, D.C.–based firm that specializes in Indian  law, wrote a nine-page letter to Mills on February 11, presenting fully  articulated legal arguments about the MOA that addressed her equal protection  concerns and more, including the tribe’s reserved treaty fishing rights. The  letter explained that the U.S. Constitution recognizes that Indian tribes occupy  a separate political status in the U.S. It cited various examples of case law  showing how the separate classification of federally recognized Indian tribes  and their members is based on their status as political entities, not racial  identity.

For decades the attorney general’s office has not been able to shake its  “inaccurate world view” that the Maine Indian Claims Settlement Act somehow made  the Penobscot and other Wabanaki nations subordinate to the State of Maine,  Francis said. This attitude has prevented the development of a good tribal-state  relationship for decades “because that office has a thirst for control and a  hunger to prove they have control,” according to Francis.

Francis has been standing up for tribal sovereignty for years against a state  that seems determined to repress it. The tribal-state relationship deteriorated  so badly in 2008 that the Penobscot Nation cut off ties with it.

The Nail in the Coffin

Frances noted that negotiations for the MOA began in December, “and never  once was the Constitution raised” until the agreement was nearly completed—a  pattern that he said has been repeated over the years.

The tribes are becoming more unified in protecting themselves from the  attorney general’s termination policies, Francis said.

“Once our connection to the river is taken, once we cannot fish any more, we  will no longer have the right to be Penobscot, in my mind—that’s terminating a  people, and we have to defend ourselves vigorously with all the means available  to us,” Francis said. “The people of Maine should know about this as well  because they have been used in this battle, turning state and tribal fisherman  against each over non issues, telling people we are trying to kick everyone off  the river when it’s really about the state wanting to protect its biggest  constituents in industry from some authority the tribe may get, a theory that is  delusional.”

The problem is institutional, and the fight is with those in power who  continue “this legacy of systematic abuse of Wabanaki people,” Francis said.  It’s an abuse that’s rooted as far back as 1755 with Phips Proclamation—an official genocidal edict detailing the  financial rewards for scalping members of the Penobscot Tribe. But Francis makes  a clear distinction between the Maine government and the Maine people.“The facts also tell us through all the smoke and mirrors that Maine people  and the tribes are more on the same side than we all may think with all these  issues,” Francis said. “Make no mistake about it—with the AG’s office, it’s  about maintaining control at all times. The problem is that while they are  feeding themselves proving it, they are also trying to tell us not just with  words but also with their actions that we are not who we know we are. Is it a  human rights violation to systematically try to alter the identity of a  people?”