PLYMOUTH 400: Four nations forge together toward 2020 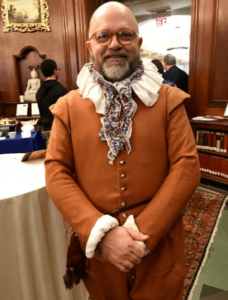 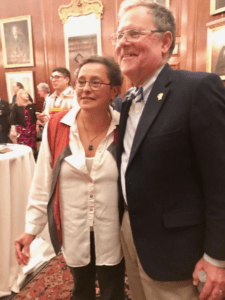 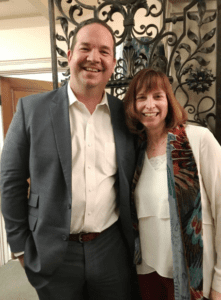 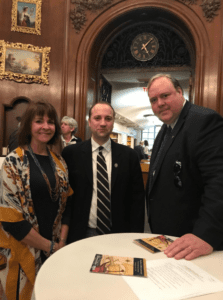 Wampanoag Chief Metacom, or King Philip as he was known, was shot and killed by a praying Indian in 1676 in Bristol, R.I. Philip’s body was cut into quarters and hung in trees. His head was mounted on a stake that colonists erected outside the Plymouth fort, in what is now Town Square, where it rotted for decades.

For hundreds of years that follows, the Wampanoag history would be swallowed up into that of the European settlers, and Metacomet’s wampum belt would loom as a metaphor. Embedded in those tiny beads were the history of his people, and the belt had vanished.

“It is our hope that the international attention given to the wampum belt project will lead to the return of our long lost treasures of our nation that were taken from Metacom at the end of King Philip’s War,” Peters told the crowd gathered at the New England Historical Genealogical Society in Boston last Thursday evening, during the Mayflower 400 International Visitor and Commemoration Program. “Among those treasures was his wampum belt – a symbolic document of our story portrayed in elaborate bead work. Generations of Wampanoag have been searching for this belt and we refuse to give up looking for it.”

Peters was among representatives of four nations who gathered at the New England Historical Geneaological Society on Newbury Street to share their plans for this commemoration in America, England and the Netherlands, as the Wampanoag, European Americans, British and Dutch join hands to tell a story that echoes down the ages. Mayflower 400 UK Chief Executive Director Charles Hacket spoke at length about the hundreds of events his country is planning to honor this shared history.

One of these is “Wampum: Stories and Shells from Native America,” which will bring Wampanoag artists to the British Museum to record, interpret and explore one of the world’s largest collections of historic wampum belts, he said.

Hacket noted that the English commemoration will take visitors to points all over the island, showcasing the rich history behind the passengers, the captain and crew.

But his is a four-nation experience, with events cross-pollinating to the continent as well.

Mayflower 400 Leiden Executive Director Michael Roumen noted that the Pilgrims’ experiences in Leiden are another facet to this history that the Netherlands is spotlighting. And it’s not just about how Leiden’s position of tolerance and equality helped shape the story, but how the Pilgrims helped shape Leiden, he said.

“The Pilgrims actively partook in that Leiden community,” Roumen added. “William Brewster taught English to Dutch students at Leiden University. John Robinson partook in the Arminian debates, fierce religious debates at the university that laid the ground for Protestantism.”

Plymouth 400 Executive Director Michele Pecoraro detailed the signature events planned for Plymouth’s 2020 Commemoration. She noted that group tours and travel plans span America, England and the Netherlands. Recently, Plymouth 400 joined forces with the Massachusetts Office of International Trade and Investment to collaborate with all of the International Consul Generals of Boston, representing 20 countries, to promote international tourism and participation in 2020.

“Early on, the Plymouth 400 Board of Directors made a commitment to present all perspectives in 2020,” Pecoraro said. “The first manifestation of this is an unprecedented Wampanoag exhibit – ‘Our Story – 400 Years of Wampanoag History,’ created by members of the Indian Spiritual and Cultural Training Center.”

The cross-pollination of events and programming is forging friendships between Wampanoag, English, American and Dutch, as representatives from these nations work together toward a common goal of telling a symbiotic story of survival that gave birth to a nation.

For Peters, it’s the dawn of a new era, when her people are part of this conversation.

“We’ve come a long way from the events of the 1970 commemoration for the 350th Mayflower anniversary when censorship led to protest on Cole’s Hill by hundreds of Native Americans across the country,” Peters said.

Far from a noblesse oblige gesture of inclusion, Pecoraro and others say this commemoration will electrify its audience with the truth in all its glory and infamy. The effervescent mood of excitement and hope during Thursday’s event in Boston seemed to suggest that 2020 is inspiring hope and promise for lasting friendships between the four nations.

Lurking in the background are the players in this story – a group of settlers, a Native American chief and his son, 50 years of peace and a war that ended that peace.

The search for the wampum belt continues.