Most people who come across enigmatic stone structures in the woods don’t know that some are remnants of a network built by indigenous Americans for ceremonial and other purposes.

This indigenous ceremonial stone landscape that surrounds us in New England is often hidden in plain sight in forests and fields. 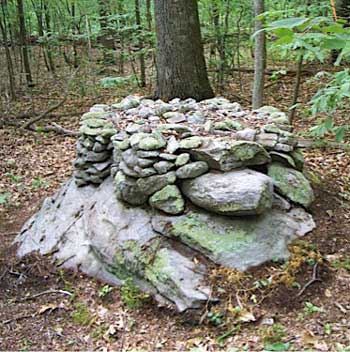 The traditional belief is that these stone structures are living prayers of stone, placed to create and restore harmony between human beings and Mother Earth. The prayers they embody continue to live as long as the stones are kept intact. Once disturbed, the harmony is disturbed.

Regional Native American tribes recognize that protecting this cultural and ceremonial resource is a team effort that often falls to municipalities who may know little about it.

In this local community outreach, called “Let the Landscape Speak,” Harris will talk about the cultural significance and importance of the ceremonial stone landscape. His presentation will include examples of indigenous stone structures and offer ample time for questions from the audience. Harris will be speaking in Volunteers Hall at the Harvard Public Library, Thursday, April 5, at 7 p.m.

Harris has been doing this work for more than 20 years. He and his office, NITHPO, work on the protection of indigenous ceremonial stone landscapes in the Northeast together with three other federally recognized tribes: the Wampanoag of Gay Head-Aquinnah, the Mohegan, and the Western Mashantucket Pequot. All four tribes are part of a larger group called USET, United South and Eastern Tribes, that is composed of 27 federally recognized tribes from Maine to Texas.

Sydney Blackwell is the Harvard liaison to the “Let the Landscape Speak” project, an effort to bring communities and tribal historic preservation offices together to protect indigenous landscape artifacts.