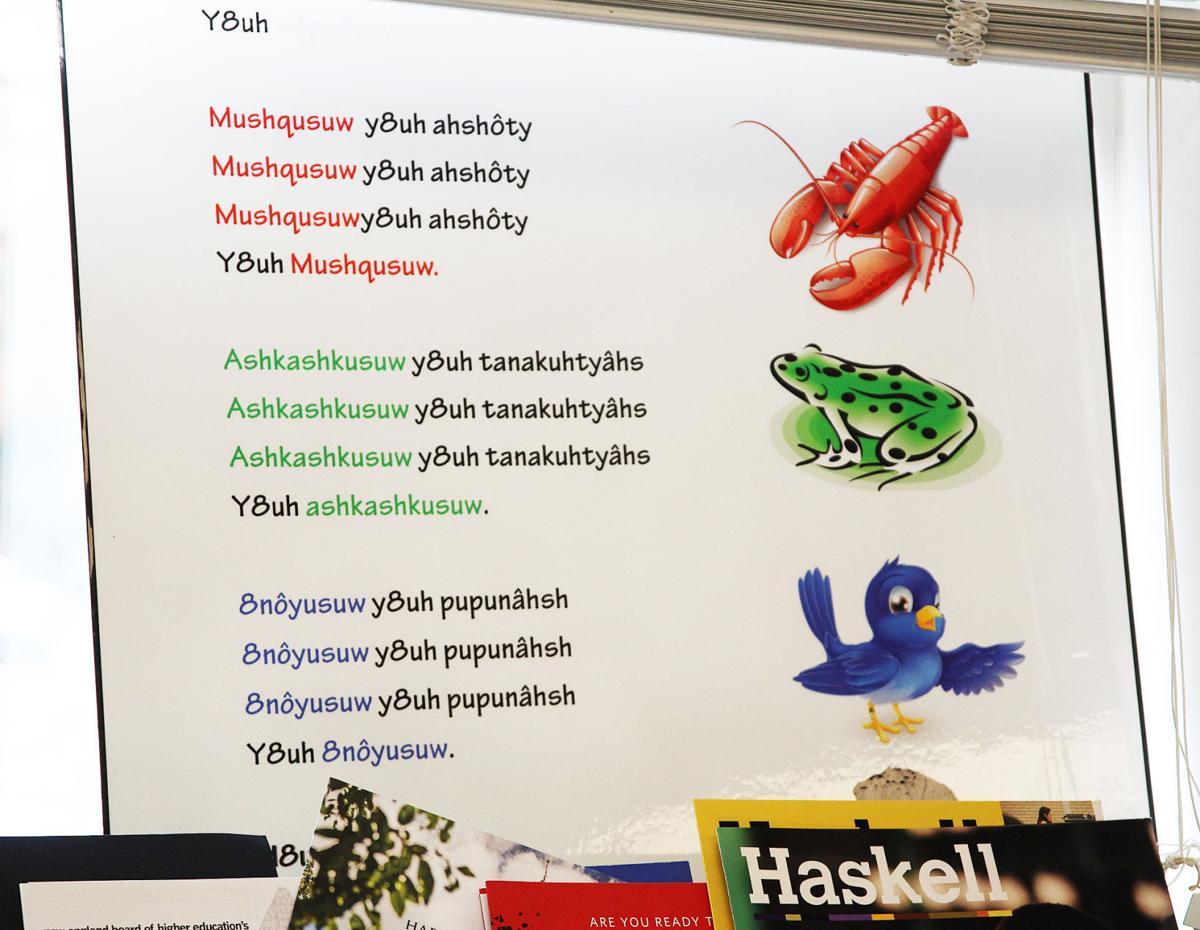 A poster containing words written in the native language of Wôpanâak is in the window of a classroom during the lessons. 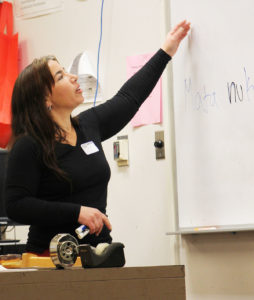 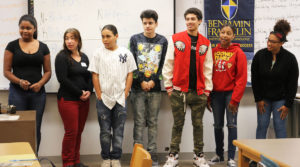 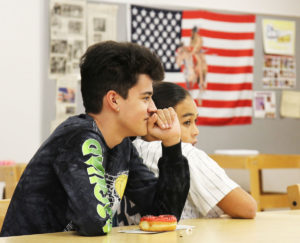 DJ Peters and Caesar Hendricks are among the students enrolled in the class. 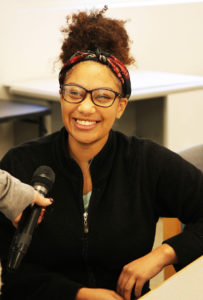 Mya Swindell, in her junior year at MHS, is interviewed by MashpeeTV following the class. 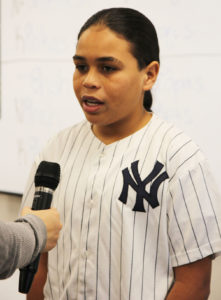 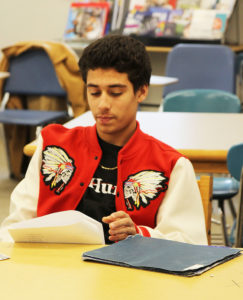 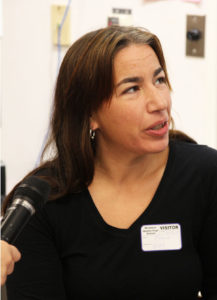 Tribal member Melanie Roderick speaks during an interview after teaching a Wampanoag language class at Mashpee High School on December 11.

The Wampanoag language, Wôpanâak, is now being taught in a public school in its place of origin.

Mashpee Middle/High School launched the first class in the indigenous language in September, and Mashpee Public Schools and Mashpee Wampanoag Tribe officials say the historical significance should not be underestimated.

“Our language was actually outlawed in the 1800s,” Jessie (Little Doe) Baird, vice chairwoman of the Mashpee Wampanoag Tribal Council, said in a Mashpee School Committee meeting at the tribe’s community and government center in October. “People living in Mashpee could be fined or jailed for teaching ‘Mashpee’ in Mashpee. This is the first time in 200 years the language has been offered in a school setting. It’s extremely important for our children to see.”

Ms. Baird, co-founder of the Wôpanâak Language Reclamation Project, said the course would be a model for schools not only in Massachusetts but also around the country.

Principal Mark L. Balestracci said that the school offers students a language credit for the course, as they do for all other language courses.

During a visit to an Indian Education Program classroom at the high school on Monday morning, December 11, the teacher, Melanie Roderick, led six students (one student was absent) through a series of declarative and interrogative sentences using the Wampanoag verbs “meech” (to eat) and “naush” (to see).

Reporters from WCAI and MashpeeTV were also in attendance.

“Nukatmeech: I want to eat,” Ms. Roderick said, writing the sentence on her white board. “Kukatmeech: you want to eat.”

She followed this with “Katmeechuw,” which means “he or she wants to eat.”

She then went around the room, asking each student to say aloud a sentence or two using the verb “meech,” a set of kinship terms that refer to family members as subjects and a list of food items as direct objects.

The letter “8” in Wampanoag words is pronounced like “oo” in “spoon.”

“Peesh” signals the future tense and means “will.”

She also asked the students to form a question using the appended word “Sun.”

“Unlike in English, some words in Wampanoag can be moved around in a sentence and still make sense,” Ms. Roderick said. “This is called variable word order.”

Next, she taught the students to make the sentence a negative, using the example “Mata nukatmeetch nee,” which means “I don’t want to eat that.”

After the lesson, 14-year-old freshman Caesar Hendricks said that, in addition to Wampanoag, he has also taken language classes in Mandarin and Spanish.

Eleventh grader Mya Swindell said she has also taken Mandarin and Spanish and thinks that Wampanoag is in some ways more complicated that the other two languages.

“Mandarin is more character-based, and Spanish is a romance language,” she said. “There’s a huge difference in the way words are structured.”

Tenth grader Nathan Mills said that learning Wampanoag is a particular point of pride for Native American students such as he and his classmates in the course.

“It feels good because it’s our language. I’m a Native American. I live and breathe Wampanoag, so it’s very important that we keep our language alive and going,” he said. “It’s not just like learning Spanish where you can talk to other people or study abroad. This is more than a class and a language. This is our culture. Whether we learn our language or not is how strong our culture could be.”

Nathan said that he and his generation feel some pressure to study the language.

“It’s important that we the youth bring it back and teach it to the younger kids as well as the older kids,” he said. “Just like the Navajo; they know their language.”

Nathan added that most of his non-native friends are not interested in learning Wampanoag.

“They don’t really care about learning a language because English really has no meaning,” he said. “You go to any country, everyone pretty much speaks English.”

Ms. Roderick, who works closely with Nitana Hicks Greendeer, the tribe’s director of education, said that she started learning Wampanoag in 1998 with Ms. Baird and has since taught Wampanoag to a range of age groups from babies to seniors.

“I’m pretty good, but I don’t know that I’ll ever get as fluent as I aspire to be,” she said. “But I hope that my kids and my grandkids will just speak Wampanoag like it’s nothing. That’s my vision.”

“None of us is here by force,” she said of her high school class. “We’re here because it means something to us. We want to be.”

Some students started the course with more experience in the language than others, she said.

“We’ve had programs happening in the community for a number of years, so kids have come to summer camp or come to community evening classes with their parents,” she said. “And some kids have had no exposure at all. We start from the beginning.”

Ms. Roderick said the course is a balance of grammar and conversation.

When asked about the Roman alphabet used to write Wampanoag words, she said that the Wampanoag people did not traditionally use an alphabetic writing system.

“We started using these Roman characters in the 1600s at the same time the Bible was being translated, that sort of effort by missionaries to convert us to Christianity,” she said. “We adapted to using the Roman alphabet. People picked up literacy pretty quickly.”

While the Wampanoag word list now has more than 10,000 items, new words for modern objects and concepts are continually being added to the dictionary, she said.

“That’s the great debate: should we just borrow from English for something like ‘refrigerator’ or come up with something new?” she said. “Languages evolve constantly anyway, so with languages that are continuously spoken, that gets done fluidly, but [with Wampanoag] we have this gap so we have to be the deciders.”

Wampanoag language scholars look to old documents, she said, for clues about how to form new words.

“You can also look to sister languages, languages still spoken in the language family, and borrow from them and change the sounds,” she said.

Timothy M. Rumberger, world language department chair for the Mashpee Public Schools, said, “We’re just thrilled that we have a Wampanoag class here in the home of the language in Mashpee, which gives students the chance to learn their heritage language. It’s a great collaboration, and we look forward to it growing in the future. I’m hoping that the non-native students will gain interest and become part of this program, which is open to all students.”

Recognizing that Wampanoag is an indigenous language, Mr. Rumberger said he changed the name of his department from “foreign language” to “world language.”

Judi Urquhart, business manager and director of development for the Wôpanâak Language Reclamation Project, said that the new Wampanoag course fills her with pride.

“We’ve come so far,” she said. “I actually wrote one of the first grants [for the language reclamation program] back in 2009 and got our first big grant in 2010, and at that point in time we began what’s called a master apprentice program where our master speaker [Ms. Baird] was able to instill language fluency into three individuals. It really has become an exponential process, so those people gain fluency and they in turn could teach people and they in turn can be certified and teach more people.”

Ms. Urquhart, who is also a board member and director of planning and development for the tribe, said the tribe has expanded its language offering to full-time community classes, with as many as 700 people participating over time.

“We’ve got this language class here [at the high school],” she said. “We teach a special elders class. We do special ‘lunch bunches’ in both the Quashnet Elementary and Kenneth C. Coombs schools. And our biggest accomplishment has been the opening of our full-day language immersion preschool which opened last year.”

At the preschool, certified teachers are instructing 20 three-to-five-year-olds in the Wampanoag language all day long, Ms. Urquhart said.

“It’s really fabulous because it’s really with children that language can come back because their brains are more receptive to language acquisition, so the fact that we’re able to create a whole new generation of speakers is really amazing,” she said.

Part of the promise that the parents have in that class, she said, is that they will agree to go home and speak Wampanoag with their children, she said.

“The school itself is free because we don’t want them to have any barriers to having their children attend the school,” she said. “But their ‘payment,’ so to speak, is the fact that they do have to participate in language classes—we ask them to go once a week—and learn the same kinds of words that their children are learning in the classroom so that there is that consistent reinforcement.”

Ms. Urquhart said that the tribe’s board will discuss expansion plans for the course.

“Right now we’ve got a full year’s worth of curriculum at the beginning level, and we need to begin to create curriculum for the second year of Wampanoag in general,” she said. “And hopefully there’ll be a new cohort of students that comes in next year as well.”

Before leaving the classroom, Ms. Roderick called to her students, “Peesh kunaush,” which means goodbye or, more exactly, “I will see you.”