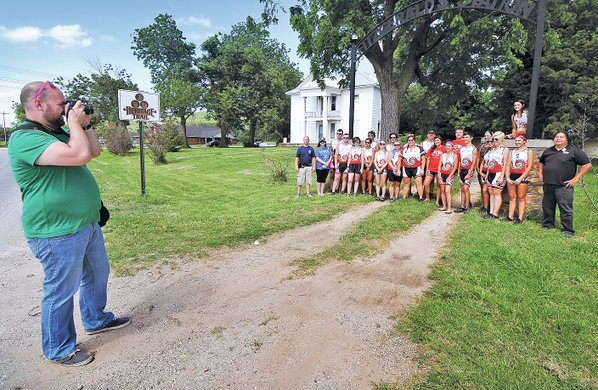 STAFF PHOTO BEN GOFF • @NWABenGoff Todd Crow, left, public relations writer for the Cherokee Nation, takes a photo of the 20 cyclists and support team with the Remember the Removal bike ride in front of Fitzgerald’s Station on Old Wire Road in Springdale.

FAYETTEVILLE — U.S. troops marched thousands of Cherokee Indians through Fayetteville in 1839 as part of the tribe’s forced relocation to Oklahoma. Almost two centuries later, a small group of Cherokees re-enacted their thousand-mile journey by bike.

The 19 Cherokee citizens in this year’s “Remember the Removal” ride arrived Wednesday in Northwest Arkansas, making their way from the Missouri border to Fayetteville. They plan to complete their three-week journey to Tahlequah, Okla., present-day capital of the Cherokee Nation, by the end of today.

Sean Teuton, an associate English professor at the University of Arkansas and Cherokee citizen, greeted the riders at the town’s monument to the Trail of Tears, as the path to Oklahoma is known. Alderwoman Rhonda Adams and a dozen other residents joined him.

The small memorial of lichen-covered boulders sits near the intersection of Stadium Drive and Martin Luther King Boulevard, just outside the fence of the university soccer field. Three pillars of rough stone stand at one end, one shorter than the others, symbolizing the men, women and children moved by U.S. forces.

The Cherokee were the last of five major tribes violently relocated from their homelands in Georgia, Florida and the Carolinas in the 1830s. President Andrew Jackson, already well-known as an Indian fighter, oversaw the removal to make way for white settlers.

Starvation, disease and exposure to winter claimed perhaps a third of the 16,000 Cherokees moved.

The Fayetteville monument was the site of a camp along the trail in January 1839, historian Jerry Hogan told the riders Wednesday. More than a thousand Cherokees came at once, tripling the town’s population.

“It was a Sunday afternoon, and some of the guys wanted to go into town for a drink,” said Hogan, president of the Washington County Historical Society.

A fight soon broke out, and a local man killed a Cherokee.

“There was almost a war right there,” Hogan said, though cooler heads prevailed.

More than a dozen Cherokee groups in all came through the area, curving from eastern Tennessee through Missouri.

The annual ride is meant both to teach the trail’s history to the riders and to spread these stories to others, said Owle and another rider, Elizabeth Burns.

“I don’t think there are many ways you can get closer to your culture,” said Burns, 18, of Claremore, Okla. “You’ll have a day when you think, ‘Oh my gosh, I’m so tired.’ But you just think, ‘My ancestors didn’t give up.'”

Riders are generally between 16 and 25 years old and must apply to participate. They go through months of classes and physical training before the ride.

Each day begins with a group prayer and war call, then they set off, Owle said. They rode up to 80 miles a day, according to the Cherokee website.

The ride serves as a bridge between Oklahoma Cherokees, such as Burns, to the Eastern Band of Cherokee Indians, such as Owle, whose ancestors managed to avoid relocation.

“I’m learning what it means for the western people, in a sense, as I’m tracing these steps,” Owle said. “I’m so excited to be finished biking, but I’m going to miss my family — my new family.”