The Florida Everglades is a very wet place. With a terrain that spans over 8 million acres of some of the richest wetland ecosystems in North America, it varies from a shallow freshwater river, filled with aquatic plants and dotted with islands of trees, to a saltwater apron of mangroves, sea grasses, and coral reefs, the combination of which naturally deal with huge variance in precipitation. But there can be too much of a good thing: Excess water is drowning the Everglades.

Of all the attention surrounding Hurricane Irma, little has been given to the way the Everglades protected the state from greater damage. The largest subtropical wetland ecosystem in North America acted as a “shock absorber” against the storm’s landfall, decreasing the predicted storm surges and absorbing rainfall and runoff. Yet now, even weeks into dry season, the Everglades is facing a long recovery, in part because all that water has nowhere to go. Water has accumulated since the month of June, with a record-breaking wet season presaging the worst flooding in 70 years. Marshes and tree islands are submerged too deep for birds to nest and wade.

Celeste De Palma is an Everglades policy associate for the Florida Audubon. “When you look at wetlands, they are incredibly valuable in terms of giving us protection against incoming storms or hurricanes, like the ones we just had,” she explained. “One acre of wetlands is able to hold up to 1.5 million gallons of flood waters, and for every 2.7 miles that a hurricane crosses the wetlands system, the storm surge is reduced by a foot. So when you hear something like that, you should think the wetlands are our allies, our shock absorbers.”

Thanks to years of development, mismanagement, and now an epic hurricane, that shock absorber is being pushed to the limit. The 60-mile-wide, 100-mile-long northern catchment of the glades begin around Orlando, draining to the Kissimmee River and into the 730-square-mile Lake Okeechobee. Water would normally feed the southern Everglades uninterrupted, but development has led to complex changes in water dynamics. Roads cut across the entire system and block the north-to-south flow. Agricultural land use has degraded water quality. At the end of this wet season, the water levels on Lake Okeechobee reached a dangerous 17 feet. As the largest freshwater lake in Florida, its condition has wide-ranging effects. Modern day water management has enclosed the lake within the Herbert Hoover Dike and largely relies on oversaturated estuaries to discharge water east and west to the sea. The Army Corps of Engineers, already engaged in strengthening work on the dike, made daily inspections during Hurricane Irma and spotted weaknesses that led to mandatory evacuations.

“We were lucky that Hurricane Irma interacted with the Everglades before going straight through to our communities, although the Keys, unfortunately, [got] hit first and it was pretty devastating,” De Palma said. “The Everglades ecosystem [hugs] the entire peninsula, so it really acted as a shield. What we’ve done is essentially pluck away at these wetlands that used to be the shock absorbers.” Agricultural land use has replaced flood plains and degraded water quality, while residential development has reduced the Everglades to half its original size, increasing run-off.

Florida Fish and Wildlife Conservation commissioner Ron Bergeron, a charismatic Gladesman, is known locally as “Alligator Ron.” His family came to Florida in the 1800s and has remained here for eight generations. Bergeron took his first airboat ride at the age of three. He says the Everglades is in a catastrophic condition after Hurricane Irma. “We broke the 1947 record for rainfall,” he said. “The Everglades was inundated, including all of the deer islands. We worked very hard with our federal partners on an emergency deviation.”

They moved vast quantities of water through Big Cypress National Preserve and from there, south to Florida Bay, which has been suffering a lack of freshwater for decades. Animals were seen in groups of hundreds, seeking refuge on levees that surround the conservation area. As state and federal agencies work together to relieve water from the upper areas of the watershed, things are starting to normalize. “The deer islands are drying up, so there’s some refuge for fur-bearing animals, but water levels have to come down more for things to be improved for wading birds,” Bergeron said. “That’s something people have to understand. When you have wetlands, and there is three feet of water, well, there is no wading bird with three-foot legs.”

James Erskine, the Everglades coordinator for the Florida Fish and Wildlife Conservation Commission, oversees the Comprehensive Everglades Restoration Plan (CERP) enacted by Congress in 2000 for the restoration of the Everglades ecosystem. The goal is to restore, preserve, and protect the south Florida ecosystem while providing for other water-related needs in the region, including providing water to nearly 8 million people. With a $10.5 billion budget spanning an approximately 35-year timeline, it is the biggest hydraulic restoration project ever undertaken in the United States. Erskine is optimistic about the project. “There were some growing pains at the beginning. Getting some initial projects off the ground may have taken a little longer than some of the stakeholders or biologists might like, but right now we have tremendous momentum,” he said.

To re-establish natural water flow, sections of the Tamiami Trail highway, which runs across the southern Everglades, are being raised on concrete pillars, including an already completed one-mile section and a 2.6-mile segment now under construction. “The Everglades hydrology is one wide sheet flow—shallow water moving slowly across a broad area,” Erskine said. “Restoring that, along the border of the Everglades wildlife management area and Everglades National Park where Tamiami Trail resides, is very important; it’s going be a tremendous help, allowing water through the system in times like this and benefiting the Everglades wildlife management areas.”

One of the biggest concerns, Erskine explained, is the wildlife. “We are still concerned about wildlife. The water levels in the Everglades management area are not compatible with the native species, both ecology and habitat,” Erskine said. “We know that water levels that persists greater than two feet, for longer than 60 days, can be detrimental. Right now we are at about 180 days; we do have concerns about both immediate and lasting effects of that.” 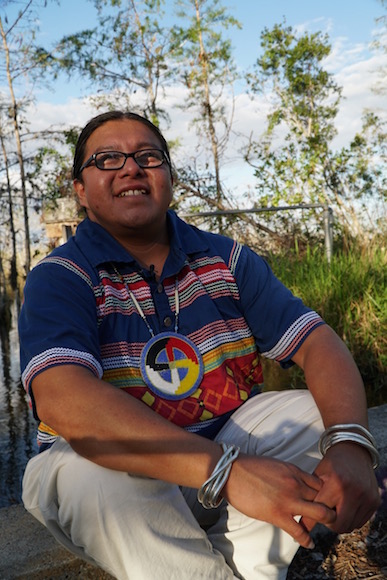 Downstream south of Lake Okeechobee, near the Tamiami Trail, Houston Cypress tells his airboat-tour guests “welcome home” as they disembark, windblown from their trip across the watery Everglades. They proceed along the dock to visit his family’s hammock tree island, called “Where the Little Pot Sits,” a place filled with spiritual significance. Cypress and his extended family are part of the community of a few hundred sovereign Miccosukee Tribe, who, along with their modern village and casino, maintain a number of more traditional properties on tree islands scattered through Water Conservation Area 3A. Cypress, with his long hair and traditional Miccosukee dress, exudes the confidence and rooted character born of a proud history; as cofounder of the Love the Everglades Movement, he educates people and advocates for cleaning up their waters.

The Everglades frames the Miccosukee way of life. “Being healthy on a physical, mental, and spiritual level—this is just a part of the bigger universe that we are part of, a grand philosophy of life that we have. It is a place where we get out medicine, where we get our food, where we tell our stories and the way we express our connection to the universe.”

These tree islands were refuge to the Miccosukee going back to the early 1800s during the Trail of Tears, when most of the Miccosukees were forced to the west of the Mississippi river. At least 100 never surrendered and hid in the Everglades. Houston Cypress is a descendent of those who eluded capture. Setting aside this tragic history, Cypress believes it is important that everyone work together to save the Everglades.

“When I think about the Everglades and look at it in my time on this earth, I am definitely conflicted in the sense that I am very sad for all of the things that we have lost but also very hopeful about what we can achieve if we get our act together,” Cypress said. “The environment is resilient and bounces back; the animals come back. So, if we can achieve progress, there is hope. We can do things right, we can get things done—together.”