Sen. Tom Udall (D-New Mexico) is pushing Congress to extend the Special Diabetes Program for Indiansbefore the funds run out next month.
In a letter to key leaders in the Senate and the House, Udall said the program has made a big difference in combating the disease. More than 300 tribal and urban Indian communities rely on the program for treatment, services and other initiatives, he noted.
“American Indians and Alaska Natives (AIANs) are disproportionately impacted by diabetes,” Udall wrote in the letter on Monday. “Nearly 30 percent of AIANs are pre-diabetic and 16 percent are diabetic – the highest rate of diabetes prevalence of all U.S. racial and ethnic groups. AIANs are also more likely to experience negative complications related to diabetes – Native diabetics are 1.9 times more likely to suffer from kidney failure and 1.6 times more likely to die from the disease.”

The letter comes after Udall, who serves as the vice chairman of the Senate Committee on Indian Affairs, hosted a roundtable in New Mexico on Saturday to discuss the program and other health issues. Attendees spoke of the need to extend SDPI, which has historically provided $150 million in grants every year to Indian Country. 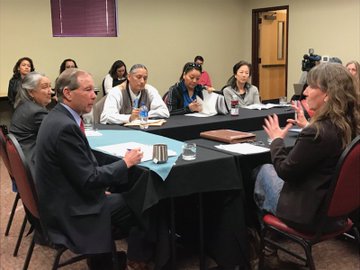 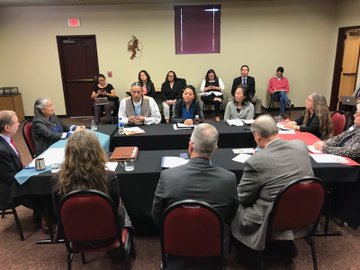 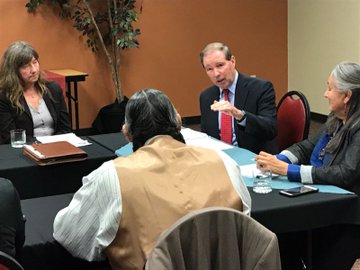 Great roundtable today on the importance of funding #communityhealthcenters and the Special Diabetes Program for Indians. I’m fighting hard in Congress to break the partisan divide over the budget and ensure these critical programs remain available to New Mexicans in need.3:01 PM – Feb 3, 2018

“At our clinic, we have close to 500 Native American patients with a known diagnosis of diabetes,” Linda Son-Stone, the CEO of First Nations Community Health Source, said in a press release distributed by Udall. “We depend on SDPI funding to decrease the onset of diabetes and its costly complications among the urban Indians in Albuquerque.”

While diabetes among American Indians and Alaska Natives remains sky-high, the program has shown success in keeping the rates down in the last 20 years. But the money will run out on March 31 unless Congress takes action.
Tribal advocates have been lobbying key lawmakers in hopes of seeing SDPI included in a new bill to keep the federal government up and running. The February 8 deadline is quickly approaching without a clear indication on the status of the program.
“Without these funds, thousands of patients in Indian Country will have nowhere to turn for diabetes help, placing additional burdens on the drastically underfunded Indian Health System – and costing lives,” Stacey A. Bohlen, the executive director of the National Indian Health Board wrote in The Hill along with Derek Rapp of the JRDF, a leading diabetes organization.”
The instability in funding will mean staff losses for SDPI programs and unreliable care for patients who depend on this life-saving program,” Bohlen and Rapp wrote.If the program isn’t included in the funding agreement, tribal advocates will have to look for other legislative vehicles. That hasn’t been a problem in the past, when five-year extensions were common.
That’s changed in recent years, as conservative lawmakers try to reign in the federal government’s spending. Tribes have had to settle for one-year and two-year extensions but even that’s become too much for some on Capitol Hill. The two most recent extensions, including the one that ends in March, have been for just three months.