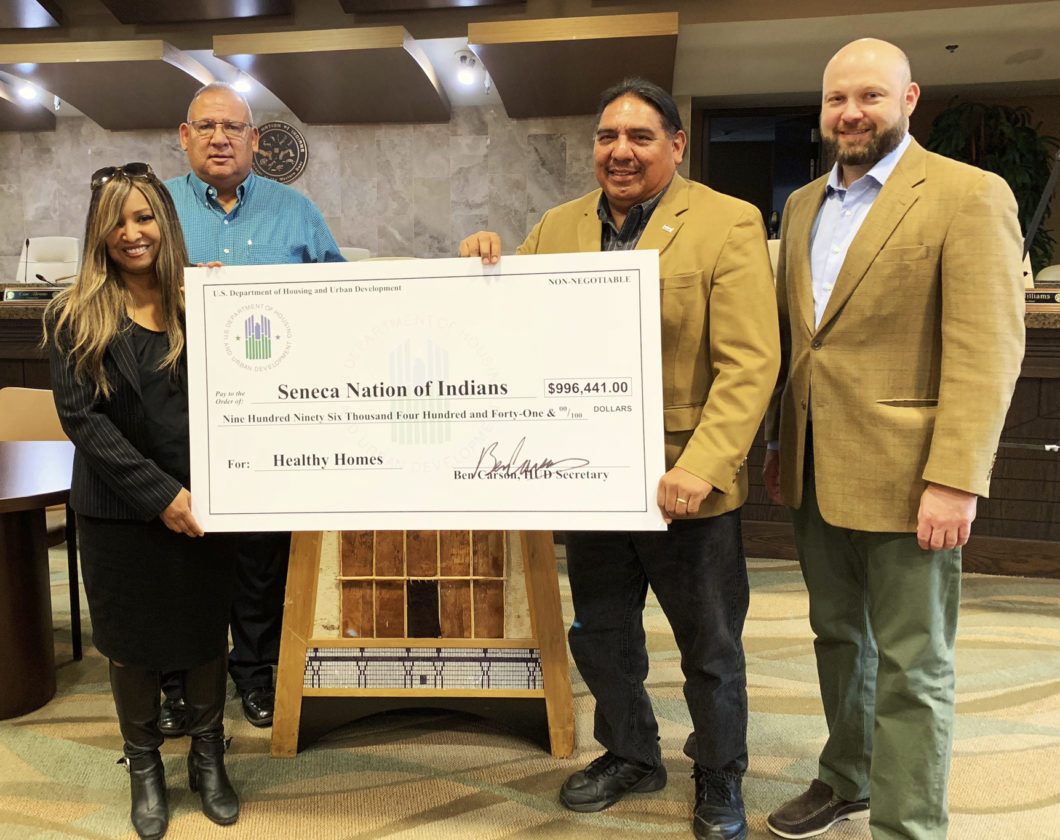 IRVING — On Monday afternoon, representatives of the U.S. Department of Housing and Urban Development (HUD) presented a grant of $996,441 to the Seneca Nation of Indians to help income challenged families within their community.

The grants that comprise this lump-sum amount are part of the Healthy Homes Production program. This program works to helps protect children and their families from home health and safety hazards. This award is part of a $12,415,732 national award that included $564,313 for the New York State Saint Regis Mohawk Tribe.

The Healthy Homes Production grant program has demonstrated a history of success, filling critical needs in communities where no other resources exist to address substandard housing issues.

“Protecting families and their children from safety hazards is a huge investment in the health of those who live in Native American communities,” said HUD Secretary Ben Carson in a written statement. “These grants, announced today, shows HUD’s commitment to collaborate with tribal communities to ensure that their housing is healthy and safe.”

“Millions of families and children are seeing their hope for the future threatened by poor health, simply because of where they live,” Matt Ammon, director of HUD’s office of Lead Hazard Control and Healthy Homes said. “This round of funding includes awards to 13 tribes and tribal housing agencies, that are receiving grant awards for the first time.”

“This administration is committed to ensuring that Native American communities are given the resources to optimize their homes and safeguard their families’ wellness,” said Lynne Patton, HUD regional administrator for New York and New Jersey. “Health hazards in the home can include asthma and unintentional injuries, therefore, these measures help families and children remain healthy and safe.”

“Over the last several years, the Seneca Nation has made unprecedented investments in the services we provide our people. Yet, many individuals and families in our community, live in older homes that can often present unseen health risks,” Seneca Nation President Todd Gates stated. “As a nation, we can only be as strong as those who are most vulnerable in our community. This funding of nearly $1 million will help make an important difference in the lives of many Seneca families where it matters most — at home.”

Thanks to this award, the Seneca Nation of Indians will be able to address hazards in 15 housing units providing safer homes for low and very-low income families with children. Modifications to the homes can include the following improvements: electrical, plumbing, ventilation, modifications to avoid trips and falls and improvements to indoor ventilation. Income challenged residents can apply through the Seneca Nation Housing Authority.