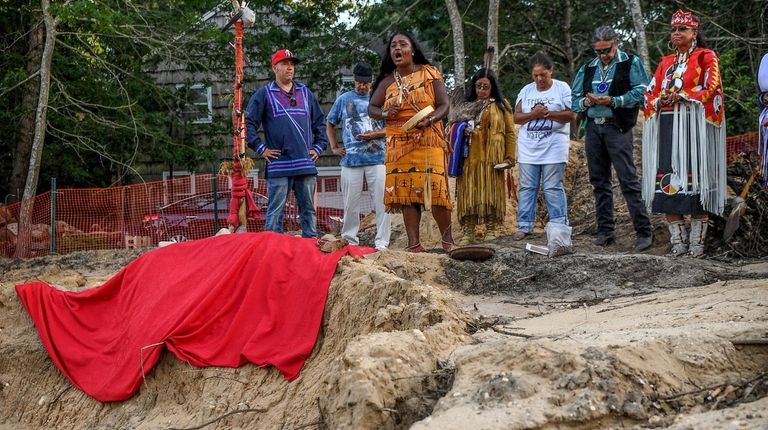 Shinnecock tribal member Chenae Bullock sings during a prayer service on Sept. 2 at the Southampton construction site where human remains likely belonging to a member of the Shinnecock Nation were unearthed. Photo Credit: Newsday / Thomas A. Ferrara

Southampton Town will purchase and preserve the site of a likely Shinnecock Indian Nation burial site, a decision that was met with cheers and applause from tribal members at a town board meeting on Tuesday.

Speaking at times in the Shinnecock language and with some wearing traditional tribal dress, members of the tribe urged the town to move forward with the deal as a gesture of respect and an acknowledgment of the Shinnecock’s history in the town.

“It’s about time we are recognized as the founding fathers, no disrespect,” Serena Lee said.

A skull, bone and glass flask, which members of the Shinnecock Indian Nation say belonged to an ancestor, were discovered Aug. 13 during construction on the Hawthorne Road site. The remains and the bottle were taken to the Suffolk County medical examiner’s office, where an anthropologist determined they were more than 50 years old. An archaeologist with the state Office of Parks, Recreation and Historic Preservation said the remains were “likely” of American Indian origin, a claim tribal members had made since the discovery.

The town board on Tuesday voted 5-0 in favor of a plan to purchase the 0.34 acre property for $450,000 using money from the town’s Community Preservation Fund, which is financed through a 2 percent tax on real estate transfers and used for open space, historic and farmland preservation. The purchase price is 4.6 percent higher than the fair market value, but the higher price is justified due to the property’s cultural significance, according to the resolution approving the purchase.

“I’d like to thank the Shinnecock Nation for their heartfelt advocacy for preservation of this property … and for working with the town in cooperation to see this property forever preserved,” said Southampton Town Supervisor Jay Schneiderman.

The tribe has agreed to contribute an additional $50,000 to the deal, money that will pay property owner KB Southampton LLC to return the land to its natural state, though some criticized that portion of the agreement.

“The Shinnecock nation should not have to buy back stolen lands,” said Southampton resident Tony Ernst, who is not a tribal member.

Schneiderman noted that $450,000 was legally the maximum amount the town could spend toward the deal.

“This is a movement,” she said. “Our entire hills are sensitive and sacred.”