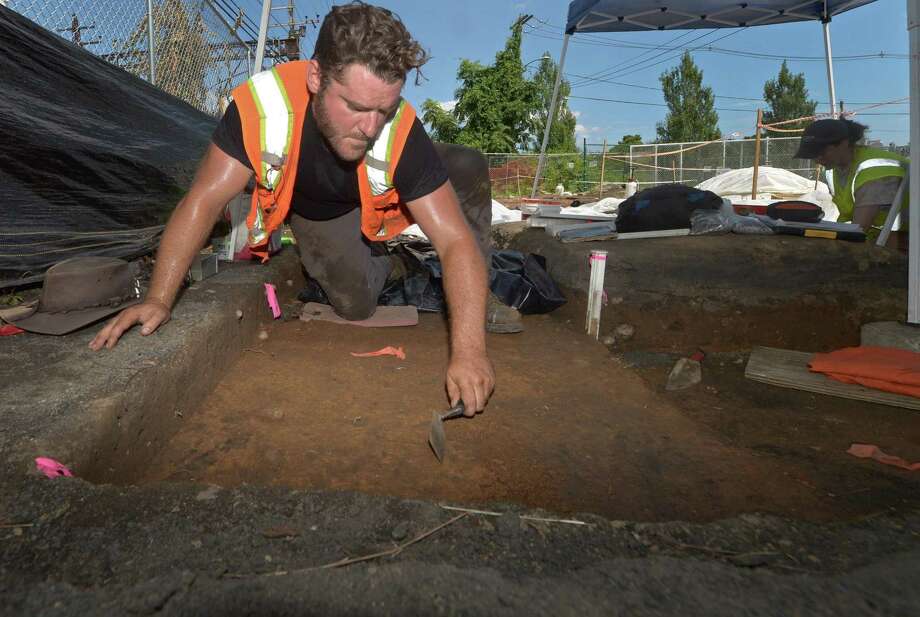 NORWALK — A delicate, metallic scratching filled the air Thursday afternoon. Underneath a tent that did little to ward off the heat, archaeologists were busy uncovering history. They scraped away layers of dirt marked by stakes and tape measures and recorded their findings on clipboards and in plastic bags labeled “Norwalk Bridge.” Wooden sieves lay nearby to make sure even the smallest pieces of the past would be captured.

A $1 million archaeological excavation is under way in Norwalk, unearthing a centuries-old Native American fort filled with several thousand artifacts. The state Department of Transportation, which is in the midst of a billion-dollar replacement of the rail bridge over Norwalk Harbor, asked the exact location be withheld to discourage people from seeking out the site because even minute disturbances to the site could cause irreparable loss.

Officials said Thursday the site would not be preserved — all artifacts would be removed. It was a stark contrast to another major historical discovery made during construction of another state project, the dinosaur trackway in Rocky Hill that became Dinosaur State Park.

The field crew was from Archaeological and Historical Services, based out of Storrs, and they had first come to Norwalk in 2017 to evaluate the archaeological sensitivity of the Walk Bridge replacement project for the state Department of Transportation. The archaeologists bored down into the ground to remove layers of soil known as geoprobes, which can provide information on whether the ground from previous eras is intact. These initial samples contained even more. Artifacts, including part of a stone tool, surfaced with the probes, a sign of the bounty preserved in the soil.

Senior Architect Ross Harper went through just a few of the artifacts already unearthed, items from both the New World and the Old. There were arrowheads chiselled from quartz and a musket ball smaller than a marble, proof of trade with the Dutch that had occurred at the site. There were the remnants of copper and brass kettles Native Americans had been recycled into beads, projectiles and spoons and pottery fragments that may be keys to deciphering cultural ties between Norwalk Indians and other tribes.

“We have recovered more Native American pottery than in the past 30 years combined,” Harper said, referring the pottery recovered in Connecticut by his company.

The oldest artifacts so far, archaeologist Sarah Sportman said, were estimated to be 4,000 to 5,000 years old.

But most of them are from what’s called the contact period — the time when Europeans first interacted with Native Americans about which relatively little is known, meaning that the Norwalk excavation could yield rare insights.

“It’s a very rare site,” Harper said. “There’s maybe half a dozen throughout the entire Long Island Sound area, and lot of those have actually been developed, and they no longer exist.”

Archaeologists believe the site will change our understanding of history on both a global and a local level.

The artifacts give insight to the international trade going on at the time, as well as the daily habits of Norwalk Indians.

”When it comes to the early Norwalk Native American groups, we know hardly anything about them,” Harper said. “We don’t even know if they were more closely related to the Delaware of New York or more closely related to the Mohegans and Pequots. This area has been this giant blank spot of what we know about Native Americans at this time period. So every single thing that we find adds something new and important to the puzzle. And because of the preservation of this site and the extent that’s left, we’ll be able to reconstruct their lives in incredible detail.”

Artifacts found so far include remnants of the charred maize, berries and animals that were eaten there. And at the far end of the site, archaeologists Ben Kelsey of Branford and Dan Zoto of Massachusetts lifted up a tarp covering part of the ground.

Underneath, a dark line where the wooden beams of a Native American fort had once stood was visible. Nearby was a patch of orange.

The color, Kelsey explained, could be iron that oxidized in the soil in response to heat generated by a fire. “We think it could be a hearth,” said Zoto.

So what’s next for the site? Over upcoming months, the site will be completely excavated until nothing remains, and then the Walk Bridge construction crews will use the site. Because artifacts were discovered on state land, they are property of the state, explained Mandy Ranslow, an archaeologist with the Department of Transportation.

“In the case of the archaeological site, we did do a thorough investigation to determine whether we’d be able to avoid it,” Ranslow said. She said a team of engineers looked into whether there was a way to redesign the Walk Bridge project so as not to disturb the site. “Unfortunately, there was not.”

When dinosaur tracks were discovered in Rocky Hill as land was being cleared for a state highway testing laboratory, that area was designated a state park. But Harper indicated that the two options for the site were excavation or documenting the site and waiting until another project made excavation necessary.

When asked what ways there would be for the public to see the site, Department of Transportation spokesperson Judd Everhart replied, “None.”

“We want to share this information with the public,” Ranslow said, but ”We will not be having public tours at this site.”

Instead, they will try to keep the artifacts local after they are cataloged.

“The historical society is already taking notes and changing our program that we do with our third-graders because we didn’t know anything about Dutch trading,” he said. “There’s no record of any of this, this is the first we’ve learned.”

He looked moved as he surveyed the site.

“I’ve been studying Norwalk history for 16 years, including trying to find out over and over again more about the Indians who were here,” he said. “And I learned more in an hour yesterday than my total sum knowledge of our Indians, just being here and listening to these guys.”