George and Marilyn Keepseagle, both Standing Rock Sioux, take part in a meeting about their historic lawsuit at United Tribes Technical College in Bismarck, North Dakota, in November 2010.

On Monday, the Supreme Court denied a petition seeking to overturn a D.C. Circuit Court decision to distribute $380 million dollars in leftover funds from the landmark Keepseagle class action case involving Native American farmers and ranchers and the U.S. Department of Agriculture.

Simply stated, $380 million dollars remaining in the settlement will not all be going to original claimants, but to organizations that serve Native farmers and ranchers.

The class action suit, known as the Keepseagle lawsuit, had proved discrimination against Native American farmers and ranchers in the 80s and 90s. In the initial rulings of the case, $680 million dollars was awarded and of that $680 million, 3,605 Native claimants received a combined $300 million dollars.

The $380 million dollars left over after the initial awards were given, were designated to claimants who may not have been able to file in the class action. Since those claimants never appeared, a remaining chunk of the $380 million went to cy pres distribution, meaning the funds will go to organizations serving Native farmers and ranchers.

The decision was criticized by some of those seeking further reparations.

In 2011, Keith Mandan and Donivon Craig Tingle, claimants in the case, filed separate petitions to the high court and sought to have the remaining $380 million given to the claimants. They argued the cy pres provisions were unfair.

This week the Supreme Court said no, and sent the case back to the District Court.

Giving Leftover Money To Organizations Is A Legal Move

Though Mandan and Tingle petitioned to have leftover cy pres funds given to claimants, Attorney for the claimants John Sellers said giving leftover funds to organizations that serve to better the world of Native farmers and ranchers is a legitimate one.

He said the leftover money–totaling $380 million–was supposed to go to claimants that had not originally filed.

“The money left over is money that was allocated to native farmers and ranchers who never made claims, they had died, there are a lot of reasons the cases been going on for many years some folks didn’t have evidence needed to make a claim, there were a lot of obstacles — some of them were distrustful of the U.S. government and did not participate. This does not mean those who received initial payments necessarily should get that extra money. The money was designated for other people who never claimed it.”

“The question we had to face, was ‘should that money go to benefit the broader class, or just the 3605 that Mr. Mandan was arguing for,” said Sellers.

Sellers told Indian Country Today that the attorney’s in the class action originally thought there might be one or two million additional funds. When it grew to the hundreds of millions, they felt the money should be better managed.

“When we realized we had this large of an amount of money left over, we felt that we, the lawyers, should not be making that decision. We should leave that decision to Native American leaders who understand the community and its needs. We petitioned the court to change the arrangement so that the decisions would be made by Native American leaders.”

“We went out of our way to change the system from deciding what to do with this money, to ensuring the decisions would be made by Native Americans and by the community,” said Sellers.

Sellers said he was pleased with the decision, yet wished it hadn’t taken quite so long.

“I think this has regrettably taken a lot longer to be resolved than we thought it would be or should be,” said Sellers. “We originally settled this case in 2011, so we are seven years into this solution. We’ve had about a 4 to 5 year delay in the distribution of this money. None of us are getting any younger, and that is regrettable.”

How The Money Will Be / And Has Been Dispersed

Due to the Supreme Court’s decision on Monday, cy pres funds–leftover after the initial $300 million was awarded to claimants–will be distributed to non-profit organizations to the tune of $38 million that have previously applied for the leftover monies.

In addition to the initial awards, claimants were also awarded another $18,500, plus a $2,775 payment sent to the IRS on their behalf to alleviate tax costs. This additional amount to claimants is just under $77 million.

According to Sellers, “The remainder, which is approximately $265 million, will be used to endow a trust overseen by 14 leaders of Native communities authorized to distribute the remainder of the money in the form of grants and loans to organizations that have served, or new ones that have been founded to assist Native farmers and ranchers. The trust will have 20 years to distribute that money.”

The amounts are to be dispersed accordingly: 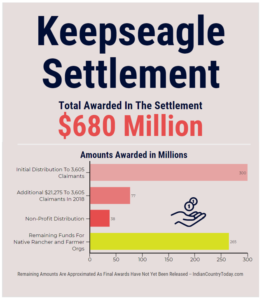 The Risks Involved In The Supreme Court Appeal

According to Sellers, one major point that has not been covered in the media was the fact that the Department of Justice was considering the option of taking back monies not awarded in the original settlement.

“The Department of Justice was considering as an option to not agree with the original claimants. They were rather seeking to have the money returned to the Treasury. That was the alternative.”

Sellers told Indian Country Today he was concerned that Mandan and Tingle were “in some ways playing with fire.”

“They were warned that that might happen. Their position was, ‘we will take that risk.’ There were some high-stakes here. They said the only thing that would accept, was all of the money going to the successful claimants. The fact that other members of the class would get nothing was not their concern.”

“All of this had me on the edge of my seat that’s for sure,” said Sellers.

Glad To Be Moving Forward

Outside of Mandan and Tingle were other claimants that were thrilled with the decision to receive additional funds and that this chapter had closed.

Marshall L. Matz, an attorney for Marilyn Keepseagle, said in an article by Law360 that his client was delighted with the justices’ ruling in the case involving her, and “looks forward to a financial distribution in the near future.”

“She really feels the Supreme Court ruling proved that she really got the maximum amount possible for the claimants,” Matz said.

Sellers said the decision will ultimately benefit all Native farmers and ranchers, including the petitioners of the appeal.

“This additional money will benefit Mr. Mandan. It isn’t as though he won’t benefit. These funds will be used to serve organizations to serve the broader community of which he is a member. What it will not do is just put more money into his pocket. It will serve a much broader community than just the 3,605 who were successful initially.”