Tara Sweeney’s confirmation hearing for the post of Assistant Secretary of the Interior for Indian Affairs was almost a celebration Wednesday. Sweeney introduced her family. Senators praised her work in Alaska. And Senate Indian Affairs Chairman John Hoeven, a Republican from North Dakota, pointed out that her “tribal leaders are not able to join us today as they are busy in their whaling season, but they also send their support for Ms. Sweeney’s nomination.”

The Assistant Secretary for Indian Affairs is the highest ranking Native American in the government and Sweeney is breaking new ground. She would be the first Alaska Native to hold the post. And only the second woman.

“As Alaska Natives, like our American Indian counterparts, we are reaching for the same future, with very similar tools,” she said. “Tribal governments to govern our respective social needs and traditional and cultural ways, and tribal corporations, to engage in the economic opportunities of our great country.”

She said the Department of Interior (DOI) “is very much a part of our past, our lives today, and will be in the future of generations yet born. The DOI is a reality with which every Native American lives.”

“I have to tell you, seeing you at the table with your family … seeing so many friends. I am just like, bursting with pride,” said Senator Lisa Murkowski, R-Alaska. She said the appointment gives so much hope and promise across Indian Country because Sweeney is a “strong, strong female Native leader ready to take charge. And believe me, we need someone to take charge within the BIA.”

Tara – the first Alaska Native to be nominated for this important position – has an incredible record of integrity, intelligence, grit, discipline, and absolute determination to work for her people, her state, and her country. pic.twitter.com/FmJFRGiZWJ

I am absolutely certain there is no one who will work harder for the rights, for the economic empowerment, and for the culture of America’s First Peoples than Tara Sweeney. pic.twitter.com/2tsCRapgtR 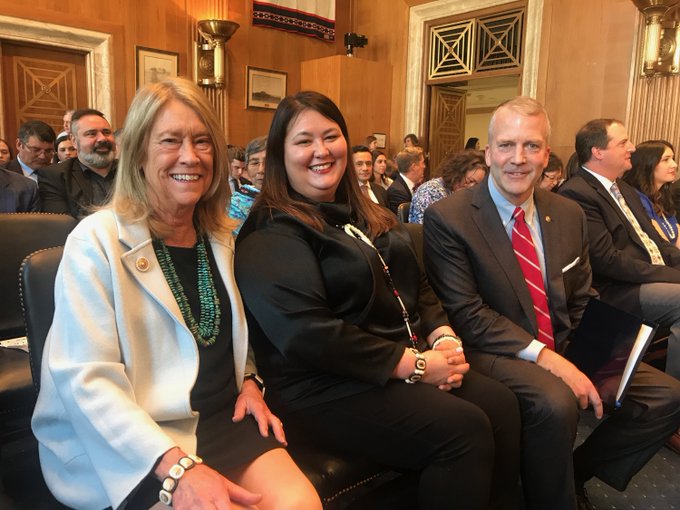 Sweeney repeated several times that her idea is to spend the first 180 days listening and consulting with tribes and corporations and then figure out how to be an advocate in the federal government for Indian Country.

If that sounds easy, just look at the budget. On the plus side of the ledger, the Trump administration is proposing a Public Lands Infrastructure Fund to pay for repairs and improvements in national parks, national wildlife refuges, and Bureau of Indian Education-funded schools.

On the other hand, the Administration is proposing major budget cuts to programs ranging from climate adaptation to social services. The National Congress of American Indians says the president’s budget represents nearly a 16 percent decrease from the current spending levels. “Nearly every line item in the BIA budget would see reductions in the FY 2019 budget request,” NCAI said.

Sweeney would not be the first Assistant Secretary for Indian Affairs to walk into the job after key decisions were already made. Even the first person to hold the job, Forrest Gerard, had to rework President Jimmy Carter’s water policy.

“My management style is a lot of transparency. I work to build a high caliber team. I also hold my employees accountable and provide a metric for success,” she said. “When you talk about balancing the needs with the funds, first and foremost, I want to be boots on the ground. I want to go out and consult with tribal leaders on what their needs are both in terms of funding but also the tools that Indian affairs needs to provide so they can exercise their right to self-determination.”

New Mexico Sen. Tom Udall, a Democrat and vice chairman of the committee, asked Sweeney if she would be an advocate within the administration for issues such as protecting important cultural sites such as Bears Ears and Chaco Canyon. She said she would champion the tribes perspective after an active consultation.

Udall also pressed  Sweeney to clearly recuse herself from any matter that could benefit the Arctic Slope Regional Corporation — something she said she had already done with the Department’s ethics officer. Udall said that included any  oil and gas development in the Arctic National Wildlife Refuge which would benefit the regional corporation.

The Senate Indian Affairs committee must still vote on Sweeney’s nomination before sending it to the full Senate for consideration.

Mark Trahant is editor of Indian Country Today. He is a member of the Shoshone-Bannock Tribes.