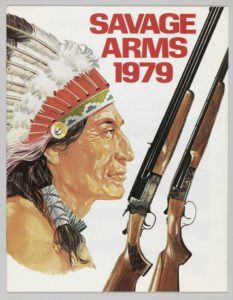 IMAGE 2
Savage Arms catalog, 1979. An Indian chief named Lame Deer negotiated a discount for rifles. In return he offered his tribe’s endorsement and an Indian-head logo.

WASHINGTON – The National Museum of the American Indian has mounted an exhibition that could transform how the public thinks of the institution. Since it opened in 2004, the museum has struggled to find an audience, and to settle on a consistent approach to how it tells stories and presents information.

With the opening of “Americans,” an exhibition that examines how images of native people have been fundamental to American culture, commerce and government, the museum and its curators have found a voice, and one every museum should emulate: They are going to address difficult questions with nuance and courage.

Visitors to “Americans” enter a long, tall gallery, with sofas and touch-screen tables, and walls that are lined floor to ceiling with objects bearing images of Indians. These include boxes for cornstarch and cookies, sports logos, a tomahawk missile, magazine covers and the famous 1970s “Keep America Beautiful” public service advertisement featuring a weeping Native American (played by an actor who wasn’t, in fact, Native American). The size of the room and the number of objects on display emphasize one major theme of the show: The ubiquity and persistence of images of Native Americans, which curators Cecile R. Ganteaume and Paul Chaat Smith argue is a curiously American phenomenon. Other countries that have practiced what is known as settler colonialism – moving in and taking over, rather than just exploiting the resources of colonized people – haven’t embedded the displaced native populations so deeply in the collective consciousness.

But the material on display goes beyond that larger message to demonstrate the complexity, inconsistency and sometimes pure absurdity of how these images have been used. And that forces viewers to confront some of the thorniest issues of contemporary culture in uncomfortable and complicated ways, including identity politics, cultural appropriation and historical revisionism.

The logo of Washington’s NFL franchise, the Redskins, is referenced along with the passionate resistance of many fans to changing it for something less demeaning: Among other things, the wall text says, the Redskins have been “a unifying force in the nation’s capital.” A baby’s onesie with the Chicago Blackhawks logo points out the capriciousness of how these logos are chosen, given that Chief Blackhawk fought with the British against the Americans in the War of 1812.

That onesie is a potent object, connecting the larger theme of cultural omnipresence with the smaller ironies of individual images. Many people have a fondness for Native American imagery because they have been surrounded by it their entire lives, they grow up eating Land O’ Lakes butter, joining the YMCA’s Indian Guides (now renamed the Adventure Guides) and driving around in Jeep Cherokees. Just like Thanksgiving, the emotions connected to these innumerable products, narratives, clubs and popular culture references can’t be extricated from American life. As curator Chaat Smith explains in an introductory video: “We’re in your head, we’re in your pantry, we’re in your garage.”

There is admirable courage on display throughout this gallery, which demonstrates that not all forms of cultural appropriation are equally offensive and not all native images are caricatures. A 1950s bullet box for .32 Winchester special ammunition carries an image of a native man in full headdress, along with the brand name: Savage. But the company was named for its founder, Arthur Savage, so it is slightly less offensive than it seems at first.

And the recurring use of Native American references for weapons, including not just tomahawk missiles, but Comanche and Sioux helicopters and Zuni missiles, is part of a national tendency to idealize the “warlike” virtues of native peoples. That idealization may be misplaced and crude, but it comes from a very different impulse than that which prompted the use of consistently humiliating caricatures of African-Americans by white commercial and popular culture.

The complexity and ambiguity of Native American imagery is explained in side galleries that take up key historical moments in the fabrication of Indian identity by the dominant, European-derived American culture. Pocahontas, daughter of a powerful Powhatan chief, may not have saved John Smith’s life, as retold in a popular myth of the early days of Colonial Virginia. But her abduction, conversion to Christianity and marriage to John Rolfe reinforced fantasies about the possible union of European and native cultures that would solve the problem of how settlers and natives could coexist peacefully (albeit entirely on the terms of white culture).

This fantasy of the “marriage” of the cultures persisted with odd consequences, including the need for a “Pocahontas” exception when Virginia passed racial-purity laws in the early 20th century. Without the exception, many fine families that claimed descent from the Indian princess would have been deemed not “white.”

Other rooms explore the Indian Removal Act, which cleared much of the South of native people who had largely taken up American identity, forming settled communities and participating in American self-governance. It was cruel and evil, but also costly and inefficient. “Each phase was badly managed and executed,” explain the curators. By 1840, the same year that a romanticized painting of Pocahontas was installed in the rotunda of the nation’s Capitol, the homelands of the Choctaw, Chickasaw, Creek, Cherokee and others had been ethnically cleansed. Or, in the words of historian Walter Johnson, who is quoted in the exhibition, they “had been converted into a vast reserve for the cultivation of whiteness.”

Perhaps the strangest and most inexplicable moment in the history of native imagery comes with the 1876 Battle of the Greasy Grass, also known as the Battle of the Little Bighorn, in which Gen. George Custer was killed, his troops defeated and much of his cavalry regiment decimated by the Lakota, Northern Cheyenne and Arapaho. It was a terrible shock to white Americans, who learned of the late-June battle just as they were preparing for the July Fourth national centennial. And yet shortly after this native victory, the Indian wars were over, with the United States government supreme and dreams of genuine native independence and sovereignty shattered.

It is almost as if a giant camera went off at this moment and froze the country’s image of the American Indian forever in time: warlike, independent and proud, and safely in the past. The Indian problem was “solved,” at least in terms of who owned the land. The country’s ambition to stretch from sea to sea was accomplished, and its next goal, to be a world power, was within reach. Native American imagery had been used since before the country existed to represent the British colonial project, and by Thomas Jefferson to represent the newly formed nation. Now, with an explosion of advertising, printing, electronic communication and popular culture, Native American imagery proliferated.

A lot of it was patronizing, and most of it was based purely on fantasy. But some of it was a projection of American ideals, based on perceived affinities between what Americans wanted to be, and what native cultures once were. Tammany Hall, a fixture of 19th-century New York political life, was named for a Lenape chief and derived from a political organization that found kinship between anti-Federalist ideas and the small, tribal governance of Native American tribes.

Exploring in a single exhibition this much material, often painful and embarrassing to the American psyche, is difficult. But “Americans” succeeds without being tendentious or bland. The curators say they don’t want to erase Native American imagery from American culture. But they do want people to understand how it got there, and why the larger American culture got so much of it wrong.

They have been tenacious in pursuing this and have achieved what so many other exhibitions fail to find: an objectivity that may placate no one but will provoke actual thoughtfulness.

“Americans” is on view at the National Museum of the American Indian. For more information, visit nmai.si.edu.