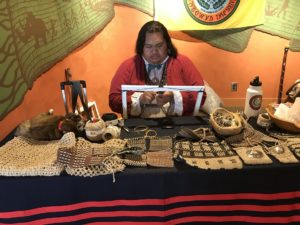 CUSTOM MADE: “We have this thing called ‘the Cherokee Experience,’” says Bo Taylor, director of the Museum of the Cherokee Indian. “If you want to do fire making, we can do that. You want to make a basket, we can make it happen.” Artist Jarrett Wildcatt, pictured, weaves twine into bags in the museum lobby. Photo by Timothy Burkhardt

The Oconaluftee Indian Village and the Museum of the Cherokee Indian, both in Cherokee, are bustling with activity as they prepare for their spring and summer season. Everywhere, construction workers and gardeners are at work amid the already growing crowds of visitors. The Indian Village will open Monday, April 30, and the museum, though open year-round, is undergoing renovations in preparation for a new exhibit area.

Museum director Bo Taylor says he is excited for the changes. “This way, we can have different artisans throughout the year, and we can borrow exhibits from other places and showcase them,” he says. Taylor says one of the first exhibits in the new space will give an in-depth look at Indian ball, the Cherokee national sport.

The museum hopes to complete renovations in early May. It has also just finished installing an audio tour, which allows guests to rent headphones and listen to a narrator talk about the exhibits. Audio tours for the permanent exhibit, The Cherokee Story: 13,000 Years, are now available in Spanish, German and English (the latter is voiced by DeLanna Studi, an actor from the Cherokee Nation in Oklahoma). For an extra fee, the museum offers a “collections tour,” where guests can go behind the scenes and look at the thousands of catalogued artifacts, including pipes, pottery, jewelry and arrowheads — some dating back as far as 10,000 B.C.

The museum is willing to work with guest groups in order to provide an experience that showcases specific aspects of Cherokee life and culture. “We have this thing called ‘the Cherokee Experience,’” says Taylor. “If you are a Cub Scout or a Boy or Girl Scout, and you say, ‘I want something to do that’s got that native thing,’ we can do it. If you want to do fire making, we can do that. You want to make a basket, we can make it happen. Projectile points, pottery — we can actually make those if you want to learn.”

The Indian Village is right down the road from the Museum of the Cherokee Indian, and it is designed to show visitors what life in a traditional Cherokee village would have been like during the 18th century.

During a visit to the village, guests will learn the history of the Eastern Band of Cherokee Indians and witness presentations of traditional crafting skills. Along with crowd favorites such as the canoe-making process and blowgun demonstrations, the village is preparing to open its new blacksmith shop in May. The presentation is the result of several years spent researching traditional Cherokee smithing tools and techniques.

“We have worked on our metalwork exhibit for a few years,” says Blythe. “[Blacksmith] William Rogers has trained village workers to do metal work, copper and blacksmithing.”

With the help of the Museum of the Cherokee Indian, the Indian Village researches various periods of Cherokee history to provide accuracy and authenticity to its Time of War series, in which performers create live re-enactments of the battles between the Cherokee and various tribes or settlers. The Time of War series covers the conflicts of the Dragging Canoe era of the 1800s, Henry Timberlake’s visitation with the Cherokees in the 1760s, The Cherokee War of 1776 and more.

One change in Cherokee is not met with enthusiasm: The Museum of the Cherokee Indian’s “Beloved Man” Jerry Wolf, a greeter and a storyteller who strove to keep Cherokee traditions and history alive and interesting, recently passed away. Beloved Man is a traditional Cherokee title, usually given to an elder of the tribe who was once a warrior and is considered a wise man in old age.

“[Beloved Man] was at D-Day. … In his old age he built houses in Haiti, volunteered with the Lions Club and raised money for eyeglasses for people with bad eyes,” says Taylor. “He did stuff that was selfless, and never told anyone about it, but people noticed. He was the first Beloved Man since the 1800s, and the next one will have some big shoes to fill. He will always be a part of us.”

So, when it comes to the most important part of the museum and the Indian Village experience, Taylor doesn’t point to the pottery or the arrowheads; he points to people like Beloved Man and the members of the modern Cherokee tribe who have worked hard to keep their culture alive and vibrant.

“My favorite artifact here is no artifact — it’s the people,” says Taylor. “I know my language, I know my culture, and I know my songs. We had our speaker meeting here yesterday; we had people from United Keetoowah Band and the Cherokee Nation of Oklahoma. We all sat together, and even though we are three different tribes, we all share one culture, one language, one fire.”

That is an awesome thing, Taylor continues. “Our story is not dead. It’s living and breathing.”