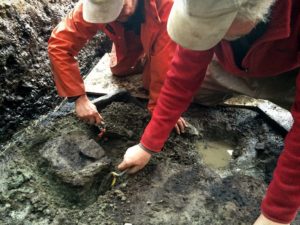 Duncan McLaren and Daryl Fedje excavate one of the footprints on Calvert Island. (Grant Callegari/Hakai Institute)

The Heiltsuk people of British Columbia have long spoken of a time when most of Canada was entombed beneath glaciers, and their ancestors fished and foraged along the coastline that formed a thin green margin between open ocean and impenetrable ice.

Now an archaeological dig has unearthed physical evidence of ancient human presence: 29 footprints pressed into the shoreline of Calvert Island, part of the Heiltsuk’s traditional territory. The prints represent at least three people — perhaps two adults and a child — and they date back more than 13,000 years, to the end of the last ice age.

“Just to know that it’s a place that our ancestors previously walked and now here we still are today, it’s really powerful for us,” said William Housty, a member of the Heiltsuk Nation.

Archaeologists say the footprints are the oldest in North America — proof that humans were here at the end of the Pleistocene. But they are not simply evidence of where people have been. Footprints tell you where someone was going, and these tracks lend credence to the theory that North America’s earliest inhabitants navigated the continent’s Pacific coastline by boat, following a “kelp highway” to greener regions in the south.

To the Heiltsuk, the prints are an affirmation of a tradition that goes back to time immemorial.

“It’s really, really exciting but also very emotional,” said Housty, a member of the board of directors for the Heiltsuk Integrated Resource Management Department, which authorizes and oversees projects such as the one at Calvert Island.

“You hear the history and the stories, and now you’re standing and looking at something that’s real, that’s confirming the stories that have been handed down over the generations.”

Archaeological material and genetic studies suggest that people first ventured into the Americas via a land bridge between Asia and Alaska. Further travel would have been blocked by the two massive ice sheets that covered most of Canada until about 10,000 years ago, yet scientists keep finding signs of human presence many thousands of years before that: in Washington, a mastodon rib with a stone point buried in it; in Chile, chipped tools and burned bones; in Oregon, fossilized feces containing ancient human DNA.

So how did those early settlers get here? For years, it was thought that they followed an “ice-free corridor” between the two ice sheets. Now scientists increasingly favor the “kelp highway” hypothesis. The only problem: Any evidence of the first Americans’ coastal presence would have been submerged when melting ice caused sea levels to rise 400 feet.

That’s where Calvert Island is special. Partly because of the way the ice sheets pressed down on the mainland, sea levels off this part of the Canadian coast were only six to 10 feet different from where they are today.

Calvert Island is also of profound importance to the Heiltsuk: Housty said there are burial sites and ancient villages on the land, and oral histories tell of a long Heiltsuk presence there.

So in 2014, scientists from the Hakai Institute and the University of Victoria, alongside representatives of the Heiltsuk and Wuikinuxv First Nations, set about sampling a small stretch of the island’s northwest shoreline.

As soon as they dug a shoebox-size test pit, they unearthed a dark impression of a foot pressed into the light brown clay.

At first, “we were uncertain if we were fooling ourselves that this was a human track,” said Hakai archaeologist Duncan McLaren, the lead author of a report published this week in the journal PLOS One.

But two more years of excavation revealed 28 additional prints that were unmistakably human. There was the curve of an arch, the pinpoints of five toes, a smear where someone may have slipped in the mud. Some looked as though they would fit into a size 7 or 8 man’s shoe; others, a size 3 woman’s; the third set of prints corresponded to a junior size 8. The researchers determined the fossils’ age by measuring the decay of radioactive carbon in the bits of wood pressed into the prints.

From the clearly visible toe marks, it doesn’t seem as though any of the people who made the prints were wearing shoes. And unlike other trackways, which march in more or less straight lines to long-gone destinations, these footprints follow no apparent pattern.

Housty imagines that they were a father, mother and child, visiting the beach to gather food. To McLaren, they look like the prints of people congregating on the shore.

“The area that was tracked would have been just above the high-tide line 13,000 years ago,” he said. “I imagine a group of people disembarking from a boat, leaving their tracks in a wet area before moving somewhere that was dry.” Left: One of the footprints found on Calvert Island. Right: A digitally enhanced version of the same image. (Duncan McLaren)

As the tide retreated, the mud would have been exposed to the sun, drying and preserving the prints. The next tide then filled the depressions with sand and gravel. Over thousands of years, forest soils developed over the site, protecting it from erosion. Today, the rock layer bearing the footprints is about two feet below the surface.

McLaren and his colleagues hope to find other areas like Calvert Island that were not frozen during the ice age and are above water today.

“This paleo-environmental work will then be used to inform the search for early-period sites along the formerly glaciated Pacific shoreline of Canada,” he said. “This line of research is really in its infancy.”

Housty sees a role for native people in that effort.

“This is oral history going hand in hand with the science,” he said.